The Bike Monday Bros are opening up Richmond’s cycle culture to all. 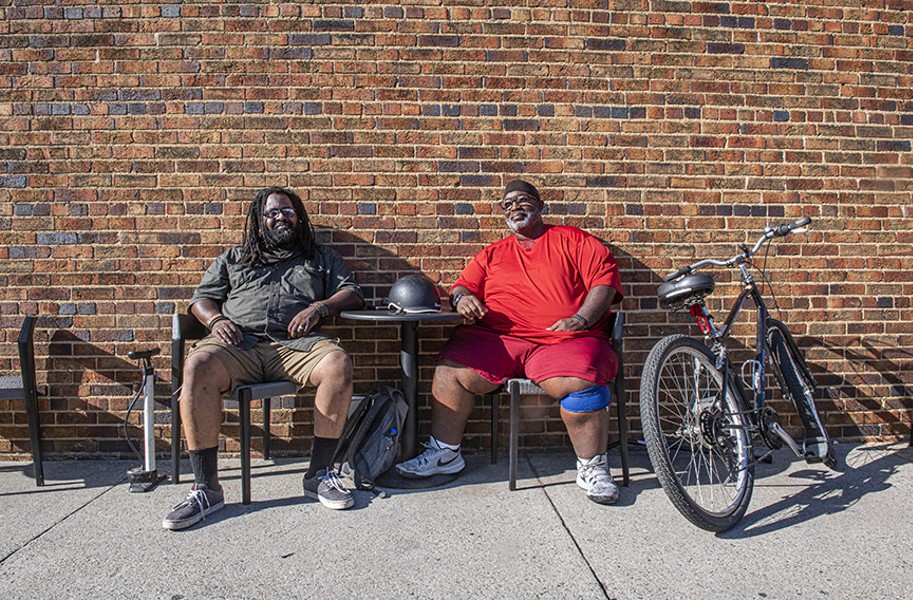 When asked to conjure up the image of a cyclist in the mind’s eye, most of us would reach for three descriptors: white, male and spandex. Although there may be a lot of men among the Bike Monday Bros, this Richmond group ride features very little of the other two adjectives. What began as casual cycling crew made up of a few friends has since grown into weekly riding ritual for folks of all ages, colors and creeds.

“Back in 2018, we saw the ad for RVA Bike Month and Haywood [Bennett], Shan [Shannon Shaw] and I decided to go,” says Keith Ramsey, one of four co-founders of the Bike Monday Bros. “After that event we just kept on riding, and eventually Jay [John Jason Cecil] joined. We started doing it on Mondays because Shan had the day off. Then it officially became the Bike Monday Bros via the hashtag he was throwing on all our pics.”

Over the years of fun rides among friends, none of the four founders expected the event to take a turn towards advocacy or building a deeper, more solemn sense of community. Then Minneapolis police officer Derek Chauvin murdered George Floyd in broad daylight despite the protestations of dozens of onlookers.

“We thought, what can we do to get out and contribute something to this moment? Let’s put together a bike ride!” Ramsey recalls. “We wanted to ride for social justice and to create a moment of rest for the community to just cruise with us and have a good time. We felt like Richmond needed something good like that to happen.”

Far from the random routes that typically characterize a Bike Monday Bros ride, the tour to honor George Floyd was meticulously mapped out by Ramsey and his crew. Starting from Monroe Park, the route twisted and turned through town reaching exactly 8.46 miles at its finish – the same number of minutes that police officer Derek Chauvin knelt on Floyd’s neck. After posting the event to Twitter, Instagram and Facebook, no one knew what turnout would look like.

“We didn’t know if we were going to have 50 people, 500 people, or just five people,” Ramsey says. “When we looked around, it looked like a mafia of bikes at Monroe Park. I think people wanted to do something that wasn’t protesting but was still community-focused. Folks needed an outlet to just breathe a little bit. News media came out to cover the ride and it ended up being close to 300 people of all ages.”

The ride proved a rare moment of Black visibility in Richmond’s biking world. Society’s fixation on white, Lycra-clad long-distance riders as the face of the sport ignores the many Black bicyclists who rely on two wheels for transportation. That focus on recreational riders also obscures the fact that Black folks on bikes face disproportionate police enforcement and harassment.

Although police departments in Virginia do not release stop data to the public, an analysis of traffic enforcement in Washington revealed that from 2010 to 2017 Black cyclists comprised 88% of stops. That Black Americans account for just 45.4% of residents in the city makes it all the worse. The study also showed that Black kids under 18 were stopped by police while biking more than twice as often as white cyclists of any age.

In a world where racism is rampant, the Black joy that the Bike Monday Bros embody proves all the more precious. “It’s important people see that bikes aren’t just a white guy thing,” Ramsey explains. “We always get a diverse group of people and we love that. We just want to create a happy space where people can connect with others they don’t know. Other bike groups in town may not be as diverse as ours, so that’s the best part of our ride: it’s representative of everybody.”

Since last summer, every Monday at 5:30 p.m. a ragtag group of riders begins to form at the Starbucks on Robinson Street in the Fan. Oftentimes the crew tops out at 15 folks and one Maltese pup in a pet trailer. The routes usually encompass North Side, the West End, Church Hill and everywhere in-between. No matter where they go, the Bike Monday Bros ride with joy and for a safer cycling experience for all.

“We’re just a bunch of brothers on bikes,” Ramsey says. “We like to show that biking is for everybody. Riding in groups is a safety thing. All of us feel safer in a group. It’s just the world we live in, especially since last year.”