The post-midnight march down Broad Street stands in stark contrast to the marching 48 years ago. 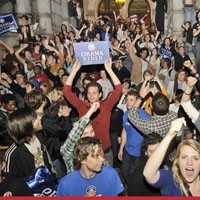 A roving group of several hundred young people celebrating the Obama victory are marching down Broad Street toward Virginia Commonwealth University. The mass of young people formed off-the-cuff around Belvidere Street, according to a member, and marched east on Broad Street to City Hall. When the group arrived at the Ninth Street entrance to City Hall, members chanted “Obama, Obama” several times, and then headed west on Broad again. Police officers are following the group, but appear not be preventing members from marching. -- Scott Bass

The marching down Broad was much different 48 years ago. Click here to read about the role that Virginia Union University students had in Richmond's civil-rights revolution.