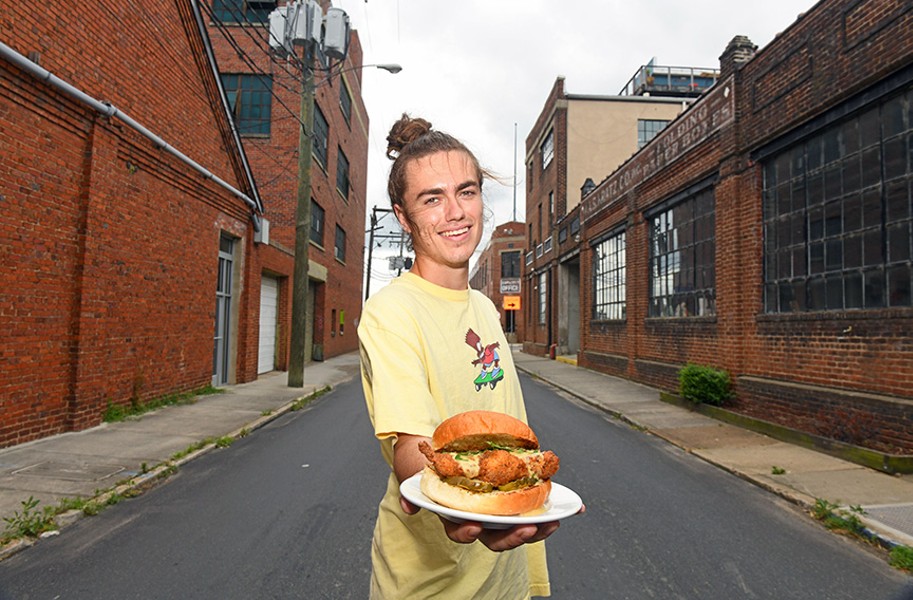 As established restaurants, bars and breweries begin to open their doors to masked customers according to Forward Virginia’s Phase 1 and 2 plans, a few brave souls are entering the market for the first time. Here’s a look at two brand spankin’ new spots, plus two on the cusp of opening:

“When I came back here and saw this – I thought ‘this is a park that Scott’s Addition does not have,’” says real estate developer Carter Snipes.

Snipes opened the 2-acre Brambly Park Winery’s park space and covered patio the last weekend of May, offering six Brambly brand bottles of vino, from a crispy riesling to a bold cabernet sauvignon. The aesthetic of the sprawling winery melds Victorian era elegance with the golden age of rail — we even hear a train rumble by on our visit.

A stage for live music is in the works, and the kitchen will soon serve a casual park menu outside, with more upscale options available inside the dining room. The butterfly garden is already in full boom and the croquet court has attracted the little ones, Snipes says.

There’s a full bar, too, but the main attraction is the wine.

While Richmond does not have a secret river-adjacent vineyard from which Brambly is sourcing grapes, it has its winemaking license and officially dub itself an urban winery. Brambly uses grape juice from three vineyards in Oregon, California and the Shenandoah Valley; these partners sell Brambly the liquid, which is then fermented in Scott’s Addition. Brambly will also purchase finished wine and do blending in its capacious warehouse.

Each wine has an assigned character: Sergeant Steven Tumblebottom is the poster boy (bear) for the Willamette Valley pinot noir, while Lady Brambleberry represents the “light, aromatic” rosé, sourced from the south of France by Shenandoah-based winemaker Michael Shaps. The whimsical renderings are a nod to the work of 19th century French caricaturist J.J. Grandville, one of Brambly’s many finely honed details.

“We’ve been pleasantly surprised with people embracing the concept,” says Snipes, acknowledging that Scott’s Addition – and Richmond in general – is a big craft beer hub.

Brambly is currently open Fridays through Sundays, with plans to open during the week in the very near future. Look out for yoga classes and weekend markets to take place in the park, too.

“We want to do outside-the-box, community-type events,” Snipes says. “People can come in here and enjoy the space, not just the restaurant. We want to keep that vibe alive as long as we can.”

It’s all about the bird at Cocky Rooster. The wing-centric spot quietly opened on Main Street the second week of June under the ownership of Brett Diehl and Jayme Campbell, hawking fried and smoked wings doused in wet or dry rubs with flavors like salt and vinegar and Southern honey. The menu is limited, but it works for such a slip of a spot. Add fries to your dozen, and if you’re vegan or vegetarian they’ve got a (faux) bird for you, too. Check its Instagram for updates, but as of now it’s open daily, 11 a.m.-9 p.m.

Though he’s worked for the Department of Juvenile Justice for 21 years, Fludd says cooking is his passion, soul food in particular – he has a culinary degree and a penchant for running the show at cookouts. He’s partnered with Jamaica native Nassue Patterson, also a former corrections officer, to open his first restaurant on Hull Street Road. They’ll be open for lunch and dinner Mondays through Saturdays to start (Fludd is hoping for a mid-July grand opening) with a potential for Sunday brunch in the future. The menu will feature items like curry chicken, stewed oxtails, pepper steak, rice and beans, “rasta pasta,” mac and cheese and fruit cobblers. It will have wine and beer too, with a potential for rum punches in the future.

Fludd says he thinks Caribbean Soul will bring authentic flavor to the city.

“A lot of people say ‘oh this jerk chicken is authentic.’ But ours is authentic [with chef Patterson] and we cook our chicken on the grill, never the oven.”

Help Fludd realize his dream by donating to his GoFundMe.

The 1115 concept will be “strictly mobile” for at least two years, with the hope to move into a brick and mortar building eventually – as long as it has a drive-thru option.

“It’s hard to get quick plant-based meals. If you’re late to work and you need to grab something that fits in your vegan diet – it’s pretty difficult,” Fletcher says.

Fletcher says so far it has made-from-scratch chicken and shrimp plant-based proteins that look and taste (almost) like the real thing. He hopes 1115 will be able to hit the road in one to three months, with plans to visit music festivals and breweries.