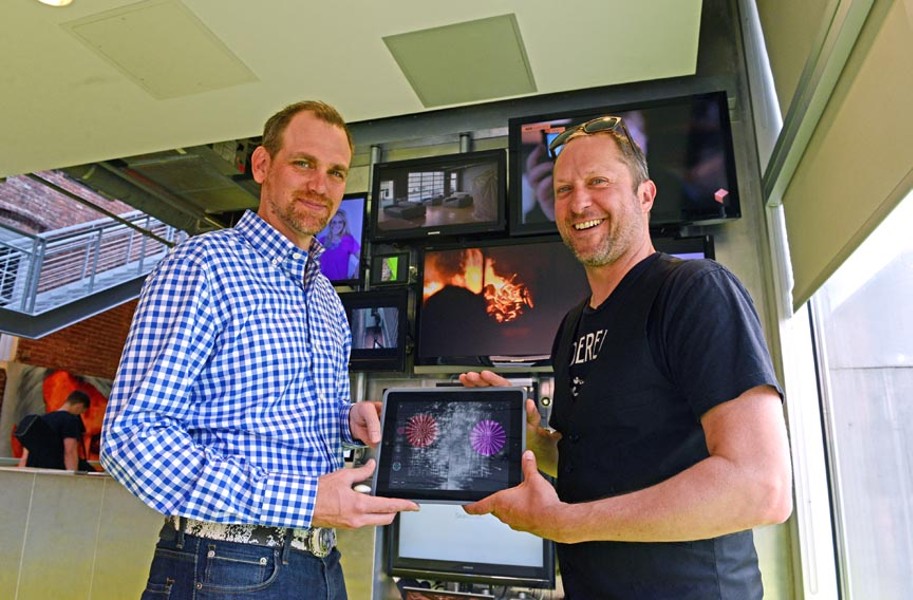 Fame is a fickle food, as Emily Dickinson put it.

The song “Hooch,” a 17-year-old radio hit, wasn’t enough make the Virginia band Everything a household name. But it could be behind the next wave of music therapy.

Bon Air resident Steve Van Dam co-wrote that funky single in 1998. Now he’s channeling the psychology of pop into an app that exercises your brain. His creation, Project Oro, marries sight and sound with touch-sensitive symbols. Think of it as a live studio for making animated music videos.

Local entrepreneur Will Anderson, a former adviser to Project Oro, says the app produced immediate results for his son. “Apps don’t serve individuals with cognitive disabilities, but this was something different,” he says. “It seemed amazing for my son. He was making music, in the zone.”

An aspiring musician, Anderson understands the app’s mass appeal. You can’t create a cacophony with Project Oro, even if you try. Van Dam mashes his iPad with random gestures, just to demonstrate. The software makes minute adjustments, coaxing out a steady rhythm. It doesn’t sound like next summer’s party starter, but it doesn’t sound bad, either. Jam sessions will synchronize, too — and that’s where Van Dam sees a use for autism.

“Step one, you bring the autistic person’s attention to something external, to the screen,” he says. “Step two, you encourage them to socialize and share, through jamming or playing follow the leader.”

Van Dam is shopping the app to Sony. He gave executives a demo in November that drew deeply from the company’s Legacy Recordings catalog.

For this version of Project Oro, the sounds and visual effects are Elvis-related. In less than 30 seconds, Van Dam produces a video that creates a loop with lyrics from “Blue Suede Shoes.” A dance beat is layered on. Black and white photos of the King flicker on screen. It’s a mash-up of pop culture, like an Andy Warhol painting come to life.

“Record companies are sitting on this catalog of treasure and don’t know what to do with it,” Van Dam says. “But they also believe that when passive listening dies, so does their control: That’s the tiger’s tail.”

Investors might prefer that Project Oro give amateurs their 15 minutes of fame. Van Dam says they’re developing a pro version of the app in which camera and mic features would allow pro users to record sound bites of themselves. Enter the next social media rock stars.

“Likes, shares and retweets — if you aren’t making actual money, investors want to see your social currency,” Anderson says, also noting that the app could be the foundation for a grant-funded university study on autism.

Van Dam and his team of four feel conflicted about their quest for popularity. “I watched my band’s record deal crumble when AOL merged with Time Warner,” he recalls of Everything. “So I know huge companies will put their own interests first.”

Public demonstrations of Project Oro were given in the fall at First Fridays, RVA Tech Jam and RVA Makers Fest. Van Dam’s team likened it to a band tour, after two and a half years of studio toil. An official release is slated for after the holidays.

“Oro is Spanish for gold,” Van Dam says. “If someone can experience joy or relief through this app, I’ll make sure they get access, no matter who they are.”

Steve Van Dam will present Project Oro at Try-me, 1623 W. Main St., on May 5 at 6 p.m. $5 admission with additional speakers. Information at c3.richmond.org.