Plans to improve Route 5, from downtown to Varina, have Church Hill residents up in arms. 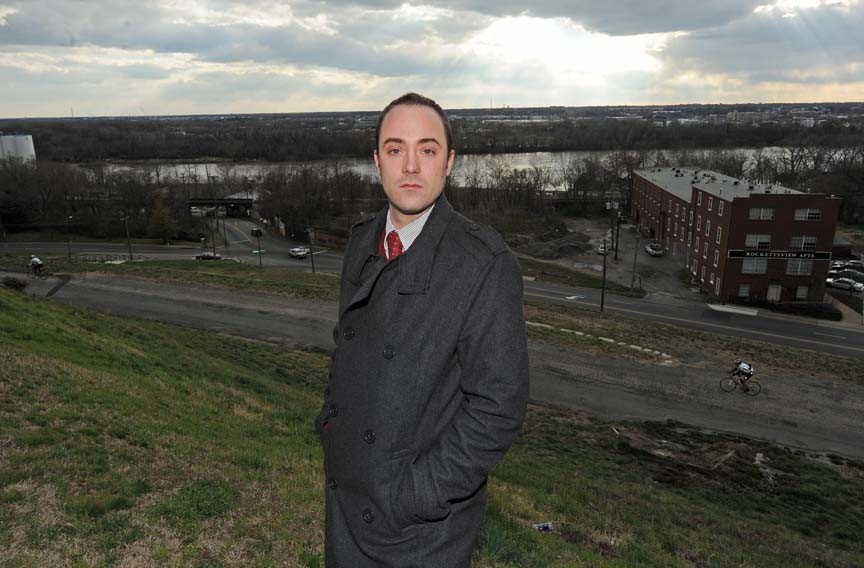 In a city so in love with its history, perhaps one of the worst offenses a public official can make is sullying that history with new infrastructure. And that's just what's being proposed in a recently released study of traffic patterns on Route 5, in the eyes of a local civic association.

The unfettered view of the James River from Libby Hill Park — the one for which Richmond was named — will disappear should officials from Richmond and Henrico County agree to one of the plans floated by the study, says Jon Ondrak, president of the Church Hill Association.

"For a lot of us, that view is the reason we decided to live in Church Hill," Ondrak says. "We don't want to see it degraded."

Commissioned by the Richmond Regional Planning District Commission, the $400,000 consulting study offers two proposals for alleviating increasing congestion along the stretch of Route 5 that connects Richmond and Henrico. The Church Hill Association has issues with both of them.

One of those options calls for widening Osborne Turnpike from two to four lanes. To accommodate the traffic increase, a bridge that crisscrosses the Fulton train yard at Main Street and Williamsburg Road would be replaced with a taller span.

That proposed new bridge, estimated at 70 feet tall, would obstruct the natural view of the river from Church Hill, Ondrak says.

The concerns about an obstructed view are "legitimate," says Lee Yolton, the planning district commission's lead planner and head of the Route 5 project. But the plan isn't finalized, he says: "We're responding to the legitimate critiques as we move forward."

Moving forward, maybe, but there seem to be indications that the progress will be slow. Despite spearheading the project, the commission can make only recommendations, and has no funding or legal jurisdiction. Asked who has that authority, Yolton says the answer's a little complicated.

As it stands, Yolton says, the commission believes that the project could be completed as soon as 2035 at an estimated cost of $70 million.

The bridge proposal is just one of the issues about which the Church Hill Association is concerned, Ondrak says. The study itself is part of a years-long multijurisdictional effort to develop a plan addressing increased traffic along the 7-mile stretch of Route 5, from about Seventh Street in Richmond to Route 895 in Henrico.

New housing developments such as the Village of Rocketts Landing only have added to the traffic congestion. And with recent changes to Henrico's comprehensive land-use plan, regional officials expect more residential development along the Route 5 corridor.

That means more people and more cars commuting in and out of the city, Yolton says. According to projections, traffic on Route 5 will double by 2030 as more housing developments are completed, he says. While that shows growth for the region, it will be an uphill battle getting everyone on board, especially Church Hill residents.

Earlier this month the Church Hill Association sent a letter to Mayor Dwight Jones asking his administration to consider the proposals' long-term effects.

The problem for the group is that certain provisions of the proposals call for traffic to be diverted down Broad Street, Franklin and other arterial roadways that cut through Church Hill. Those roads are unsuitable, Ondrak says: "Church Hill is very much a walkable neighborhood. It would make those streets unsafe … for pedestrians."

The association also opposes widening the section of Route 5 where Williamsburg Road becomes Main Street. Increasing the lane count from four to six lanes will decrease parking for established businesses and nearby residents, Ondrak says.

Although the commission continues to seek resident feedback — albeit informally — Yolton says the changes may be necessary as the population of Varina and the surrounding area becomes denser.

"With the study we're talking about a long-term capital project where we would make changes gradually and over time," he says. "Concerns can be addressed. But these issues aren't going away."

The final version of the study has been released, Yolton says, though there's no set timeline for approval. The next step is for the proposals to be taken up by officials and administrators in Henrico and Richmond. S