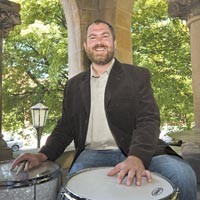 You'd need a full page to list all of the musical projects that drum master Brian Jones has been involved with since he came to town to attend the University of Richmond in 1991: Ombak, Fight the Big Bull and Agents of Good Roots have been the most prominent. He was a history major, but his greatest lessons came from the school's music department. “I was incredibly inspired by a teacher named Howard Curtis, a great jazz drummer,” Jones says. “He taught me to have goals as a drummer.”

Today, Jones is in his own position to educate, teaching drums at UR as well as Virginia Commonwealth University and the College of William and Mary. And he definitely has goals. He's performed on CDs by Jason Mraz, Mandy Moore, Boyd Tinsley and others, and his label, Slang Sanctuary, gives a home to a prolific array of his experimental jazz combos, such as the Wurlitzer Trio, Them Against Them and the Brian Jones Quintet. The married father of two says he's “enamored with the avant garde. I feel in love with that kind of freedom. … Most of my decisions are based on instinct or trying to have fun.”

One bit of fun is Brian Jones' Musicircus, set for the Visual Arts Center on Oct. 22, a long-running annual tribute to John Cage's similarly titled experiment in mass jamming.

Of all his various endeavors, Brian is most proud of the Mingus Awareness Project, a benefit concert that features the cream of the local jazz scene performing the songs of the late composer Charles Mingus. The annual event raises money for amyotrophic lateral sclerosis, also known as Lou Gehrig's disease, he says, “the disease that eventually killed Mingus.”