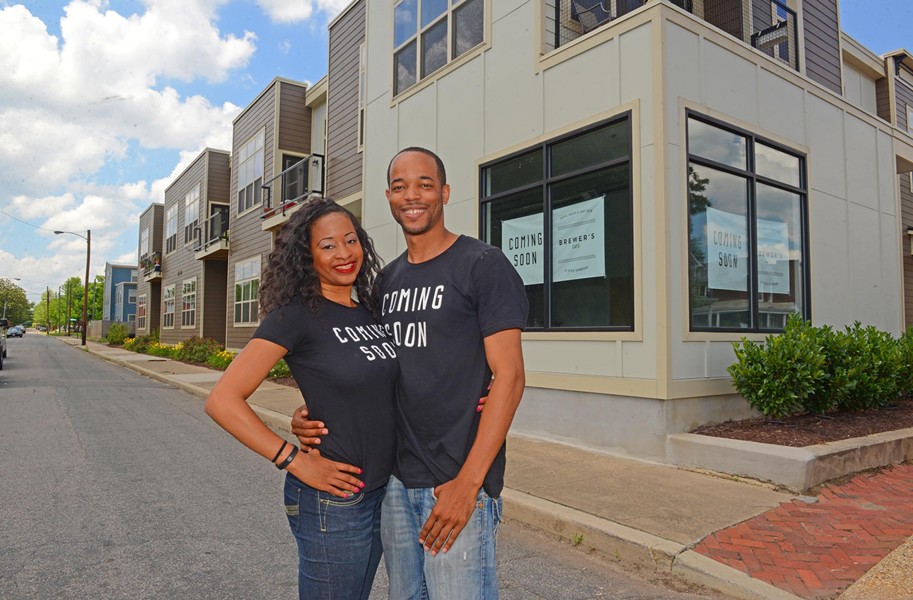 Scott Elmquist Michelle Cosley and A.J. Brewer will open Brewer’s Café at the beginning of August at Bainbridge Avenue and 12th Street.

It wasn’t working out. A.J. Brewer was a successful stockbroker who didn’t like the way the job and its emphasis on money was rearranging his priorities. His fiancee, Michelle Cosely, was pregnant, and he wanted to get out of Washington. “We were getting lost up there,” Brewer says.

When a friend offered him a job at TD Ameritrade in Richmond, where the couple grew up and have family, it was a natural fit. That part of the problem was solved, but not all of it. It was important to Brewer to find a way to give back to the community.

He mulled over possible solutions with Cosely, he says: “I thought that before I bought a home, before I had another [child], bought a boat or an antique car — before I started making these large purchases, let’s just stop here and see if we can do something on our own.”

But exciting at the same time. “It’s been a roller coaster,” she says. The couple, now new parents, decided to make their 70-page business plan a reality and found a location at 12th Street and Bainbridge Avenue on the South Side.

Brewer’s Café seemed like a logical name, and they envisioned it as a kind of Urban Farmhouse or Lamplighter Roasting Co. — with sandwiches, salads, light fare, wine and beer on tap, and of course, great coffee.

Brewer found house-roasted coffee beans to supply the shop at Red Rooster Roastery in Floyd. Owners Haden Polseno-Hensley and Rose McCutchan helped with equipment and barista training. He found his chef, Erica Ashmeade, in Philadelphia. She was enthusiastic about moving to Richmond.

Then the road got a little bumpier. The bank turned him down twice for a loan. Ashmeade had family complications and couldn’t make the move to Richmond until later in the year. His graphic designer backed out, and it seemed like the project wasn’t going to make it.

Undeterred, Brewer applied for another loan — and got it. Ashmeade told him that she could devise a simple menu full of dishes that he could make himself until she was able to get there. At the moment, design is underway, the build-out is scheduled for July 1, and Brewer’s Café — if all goes well — will open at the beginning of August.

The shop’s Bainbridge location sits on the border between two different socio-economic parts of the city — young professionals who developers envision will occupy the thousands of apartments and condos going up in Manchester and the poverty-stricken area south of Bainbridge Avenue.

“Richmond is changing for the good,” Brewer says. “But people in the inner city feel like so many things are being taken from them.” He wants instead to show that what might seem impossible (and almost was) can be done. And maybe pass along a little financial advice — this time, free.