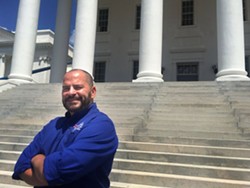 In response, lawmakers told state bureaucrats they should clarify who does what when it comes to inspections of the growing industry so breweries can open without added burdens.

Kevin Erskine, who is opening Coelacanth Brewing in Norfolk's Ghent neighborhood, was among brewers lodging the concern before a commission chaired by Sen. Frank Wagner, R-Virginia Beach, that reviews agency regulations.

Confusion over a state Health Department review of his brewery, which is under construction on West 22nd Street, delayed him at least 30 days.

The problem: The Health Department is trying to regulate free-standing breweries as well, "trying to enforce restaurant-style regulations on a brewery operation."

The two agencies have a memorandum of understanding to avoid duplication in regulation of wineries, officials said. No such memo exists for breweries, and lawmakers directed both agencies to create one.

When Coelacanth opens, it will become Norfolk's third craft brewery. But Erskine has hit snags along the way.

In early July, he was told he needed approval from Health Department officials before his building permits could be approved at City Hall.

A health inspector looked at his plans and called him. She asked where his kitchen was.

"We don't have a kitchen. We're a brewery," he told her, and he said he had no plan to make or serve food.

That led to a back-and-forth in which he explained several times that Coelacanth was not a restaurant, he said.

He asked for the code the health official was using, read it and realized she was treating his business like a restaurant.

The health official told him he would need to install screens over four roll-up bay doors. Erskine got an estimate: $2,000 per screen. He asked why they were needed and was told they were to keep out rodents and insects.

Two health officials told him the department considers beer to be food and that he fell under the same rules as a restaurant. Erskine consulted with Vassey at the brewers' guild, and they reached out to Wagner's commission for help.

"We've been kind of dead in the water for a month because of this," Erskine told lawmakers Thursday.

Legislation could clarify the law. But Wagner said he hopes the regulatory overlap can be worked out through a memo of understanding between the departments of Health and Agriculture for breweries and distilleries, which also are proliferating across the state.

Sen. John Cosgrove, R-Chesapeake, Del. Bill DeSteph, R-Virginia Beach, and Del. Matthew James, D-Portsmouth, all expressed interest in making sure Erskine can get the brewery open as soon as possible and free of undue regulation.

Erskine said in an interview that he's hoping to open by fall.

"Breweries are new, and Virginia is pretty late to the game with the explosive growth of craft beer," he said. "The regulations haven't caught up to the environment that we're in."

"If there's issues we can resolve to get them moving, I commit to do that," he said.

Patrick Wilson is a reporter for The Virginian-Pilot, where this story first appeared.