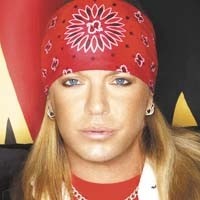 Hair-metal mastermind, Poison frontman and bimbo-dating recidivist Bret Michaels will not be playing a show at The National this weekend. His show at the NorVa in Norfolk was also canceled. Word from the Broad Street venue gives us the basics:

"Due to unforeseen circumstances, the Bret Michael's concert originally scheduled for the National this Sunday, 3/29, has been canceled.

Tickets for this concert may be refunded at the point of purchase.

We regret any inconvenience this may cause."

This announcement comes two days after a special buy-one-get-one-free offer on the $35 tickets, which leads us to believe that perhaps Michaels, whose VH1 show "Rock of Love" is a ratings leader for the network, isn't quite the draw for Richmond's music fans. Low ticket sales may have been the cause for his pulling out.

But interestingly, the Poison tour that rolled through Innsbrook After Hours last August attracted huge crowds. So is CC Deville the real draw for local audiences?

In related news, The National, which picked up seven shows from the closing of Toad's Place, has announced a number of high-profile shows for the spring and summer, including The Shins (May 13), The Felice Brothers (May 23), Passion Pit (June 8) and Jenny Lewis (July 3).

The National has also added a second performance for the April 11 Tracy Morgan show, which proves that Richmond audiences do respond well to celebrity, as long as it's not trying to woo our fake-breasted daughters.