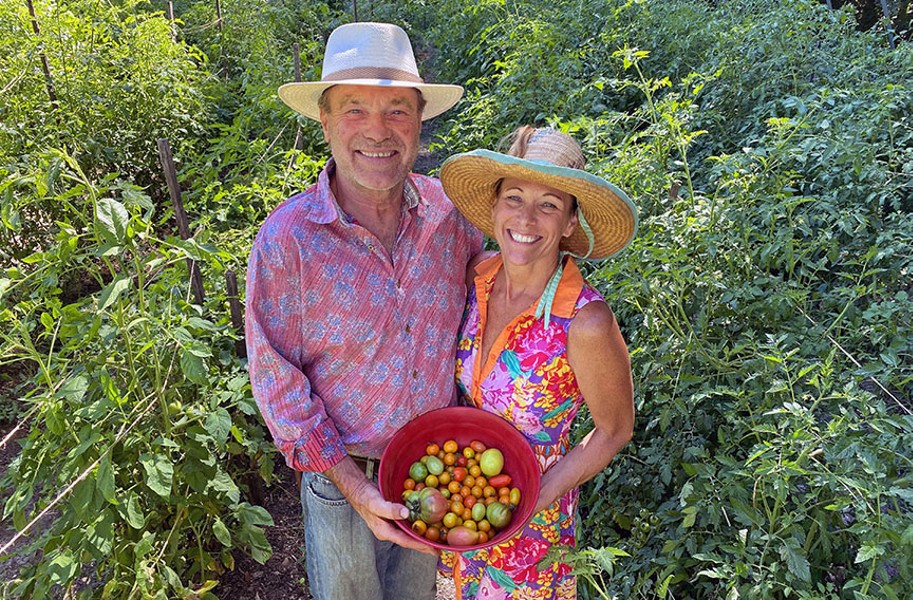 Scott Elmquist David Hunsaker and Barbara Hollingsworth at Village Garden RVA Farm in Hanover with the first harvest of the year.

Barbara Hollingsworth squeals “Do you see that?”

An Early Girl tomato, transitioning before our eyes from waxy green to light blush to cherry red, peeks out through a sea of green vines.

“We’re going to be swimming in tomatoes in a week,” David Hunsaker says.

Hunsaker and Hollingsworth have been operating a small family Hanover County farm, Village Garden, for a decade now.

Over the course of the next six weeks, the Village Garden tomato whisperers and Barboursville sommelier Jason Tesauro will hold a Supper Summer Somm series featuring nine central Virginia restaurants. The series kicks off with a sold-out Wednesday, June 23, dinner at Common House and ends with a grand finale at the farm Aug. 9.

Chefs will be creating their own multicourse meals, paired with Barboursville vino, using Village Garden heirloom varieties like the Early Girl, Mikado, Piennolo and Gold Nugget.

The heirlooms each have their own preferences and peccadilloes – more than 150 varieties grow on this fertile plot of land, all assiduously cared for by Hunsaker and Hollingsworth.

The Piennolos grow in clusters like large grapes, while the Gold Nugget cherry tomatoes, often early to ripen, hang low and heavy to the ground. “You cannot prop that tomato up,” bemoans Hollingsworth. Indigo cherries are veined with streaks of green and lavender and the oxheart tomato, still a pulsating emerald, really does resemble a human heart.

These one-of-a-kind, mercurial beauties are naturally a chef’s dream. But growing them is no easy feat.

“Heirloom vegetables are difficult because they don’t have disease resistance,” Hunsaker says. “They get sick in a heartbeat … and it’s even more difficult if you grow a tremendous diverse number of them.”

Village Farm does everything by hand, choring primarily in the cooler mornings and evenings to avoid the brutal afternoon sun. The couple does not use pesticides, which means many hours spent weeding and spraying diluted soapy water on tomato plants when aphids attack.

Hunsaker uses oyster compost and bone and blood meal to fertilize his tomatoes, and the two occasionally suit up for some evening pest hunting, shining a black light to catch bio-luminescent horn worms at nightfall. They used to feed the worms to their family of ducks.

While the Hanover property is 10 acres, only 1 is good for growing. The rest is protected “bird paradise,” Hunsaker says.

The couple makes good use of this acre, though. They specialize and are known for their heirloom tomatoes and chilies, yes, but the two also grow nearly every herb under the sun, plus pear trees, sparkle strawberries, horseradish, multiple iterations of citrus, grapes, asparagus and Ichiban eggplant – the list goes on.

“Barbara has certain things she has an affinity for, I spend a lot of time on the tomatoes and chilies and dabble in the rest of it,” Hunsaker says.

Hunsaker’s devotion to the almighty tomato extends beyond the physical tilling of weeds and tucking of delicate tomato crowns into twine. He’s constantly researching, too.

“Our first year we grew 53 varieties and we thought that was a lot,” says Hunsaker, laughing. “Every year we find new things.” This year he discovered the Mikado, a tomato named after a popular late 19th-century Gilbert and Sullivan play. “The Brandywine tomato came out right after and usurped the Mikado’s popularity,” he says.

As Hunsaker and Hollingsworth make their way down the rows of tomatoes on a steamy mid-June afternoon, Hollingsworth continues to light up, pointing to some of the first tomatoes of the season. “We pick them right at what we call the breaker stage,” Hunsaker says.

This breaker stage is that brief period right when the pink of the plant starts to become noticeable. “If you pick it when it’s green, really green, it won’t ripen. You want to pick it at the breaker stage, a couple days early,” Hunsaker says. “If you wait until they’re too ripe, every critter in the forest is doing what you’re doing, but at night. You can’t wait to get them tomorrow.”

Hunsaker started sharing his passion for tomatoes with Richmond chefs 10 years ago, right when the farm-to-table movement was really finding its footing. “We actually just started going to the chefs, 90% we didn’t know,” says Hunsaker.

“After the farmers market on Saturdays my truck would be full of these beautiful tomatoes, every shape and size and color, and we’d go to restaurants in the afternoon when chefs were prepping but weren’t too busy and we’d just knock on the door,” he explains. “I’ve never really met a chef who wasn’t over the moon about tomatoes.”

This includes Lemaire chef Patrick Willis, who will be using Village Garden heirlooms for the restaurant’s already sold-out, four-course June 30 dinner. “We’ve been using David’s tomatoes for years,” Willis says. “Because I’ve worked with Dave for so long I am familiar with his varieties, so I designed a couple courses specifically around certain tomatoes.”

“They have this depth of color and flavor, and pair well with a lot of summer herbs and other vegetables,” Willis says. “The tomatoes really speak for themselves.”

Lillie Pearl
Wednesday, July 21, 6 p.m.
$75 (four courses, bubbly to start)
Guests are asked to purchase gift cards instead of tickets to use at the event. Contact lilliepearlrva@gmail.com to purchase a gift card and be put on the list.

Saison
Monday, July 26, dinner as normal service starting at 5 p.m.
Price to be determined, seven courses
Make reservations by calling the restaurant at 804-269-3689