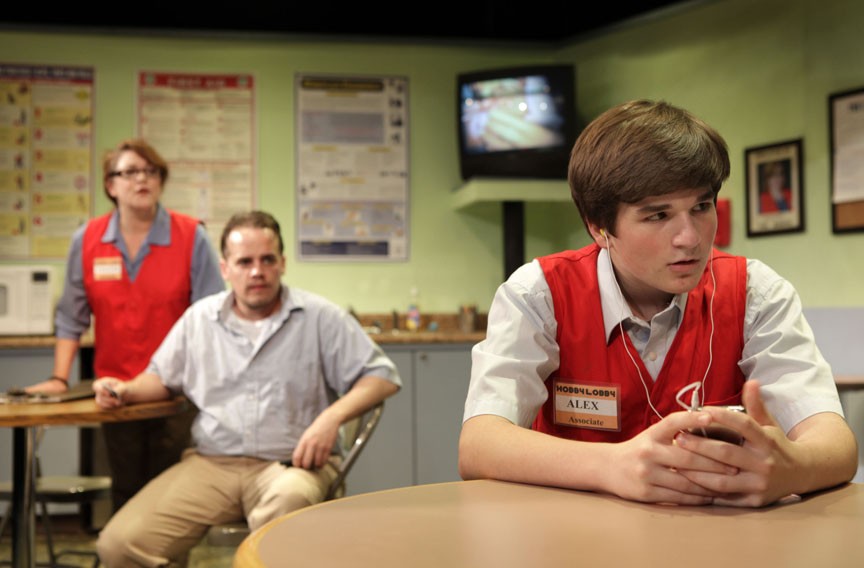 A warning: After watching the Firehouse Theatre’s “A Bright New Boise,” you may find yourself looking askance at the employees of your local craft store. The characters in this powerful comic drama all work at a Hobby Lobby in Boise, Idaho. They’re quirky in the extreme, providing plenty of fodder for laughs under Morrie Piersol’s capable direction. If they’re also a little off, it’s because they struggle with demons as commonplace as overbearing parents and as cataclysmic as the end of days.

Ironically, the character who seems the most normal faces the most difficult struggle. Mild-mannered Will (played by Billy Christopher Maupin) arrives in Boise hoping to make contact with Alex (Nathaniel Smith), a son he gave up for adoption. Will fled a small Idaho village after a tragedy rocked the apocalyptic church he helped establish. His attempts to reconnect with his son happen in the bland sterility of the Hobby Lobby break room, where Will is thwarted by Alex’s rejection, the hostility of Alex’s foster brother, Leroy (Jacob Pennington), and the interference of store manager Pauline (Jill Bari Steinberg). In the end, it’s Will’s insistent belief in the coming end times that undermines his efforts, leading to a surprising but still devastating personal apocalypse.

Though Maupin has too fresh a face to match his character’s 39 years, he effectively projects the world-weary burden of Will’s regret while maintaining a low boil of religious fervor just under the surface. The best scenes of the play match him with Audra Honaker, a natural beauty rendered mousy and skittish to portray Anna, a store worker who hides out in the break room after hours. The uneasy dance of flirtation between Will and Anna is alternately hilarious and heartbreaking.

Steinberg’s profane manager Pauline provides an energy boost to every scene she’s in, while Pennington’s Leroy is an intriguing mix of protective sibling and in-your-face artist. Playing an angry teen coming to terms with a long-lost father, Smith has a tough job, and his performance is a tad one-note. But he ultimately finds the right shades of sensitivity as Alex opens up to Will.

Scenic designer David McLain and lighting designer Robert Perry work together to create an appropriately antiseptic retail environment, punctuated by a video screen where corporate drones give crafting tips. The video feed occasionally cuts to scenes of graphic medical procedures, an effective metaphor for the simple lives in Boise that are sliced open by domestic drama.

Correction: This story has been updated with the correct name of Nathaniel Smith, who plays Alex.