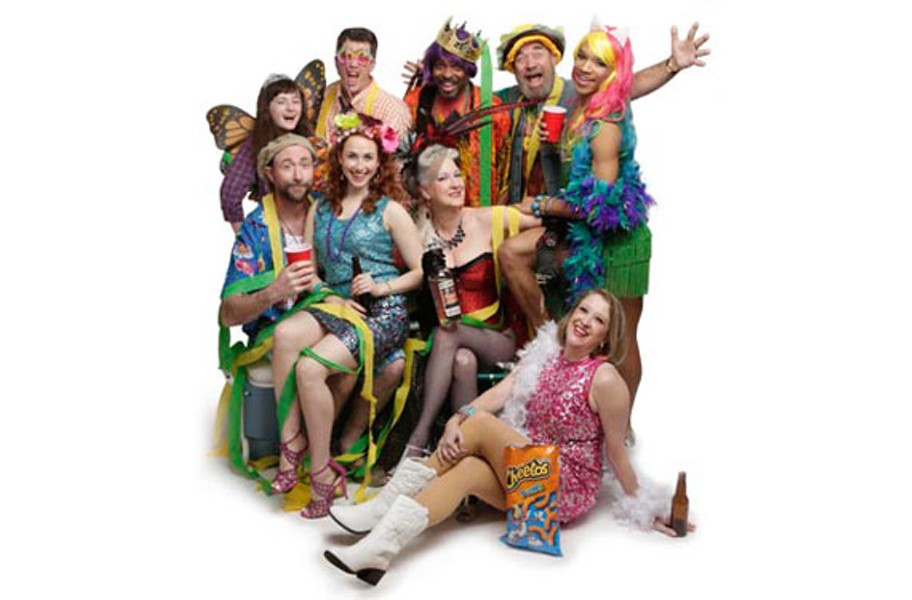 It happens at the beginning of February like clockwork. After taking the holidays off, Richmond theater companies rehearse through January to let loose a tidal wave of shows. Some have short runs. So here’s a brief look:

It might be only February, but Mardi Gras is arriving early at Virginia Repertory’s November Theater with Lisa D’Amour’s “Airline Highway.”

The gritty dramatic comedy takes place at a roadside motel in New Orleans, where the matriarch of a down-and-out community is dying. As per her wishes, the former stripper Miss Ruby (Starlet Knight) is holding her funeral early to celebrate, collecting her motley crew of friends for one last blowout.

“She tends to do these themes about a dying culture, or something that has happened to a city,” Satterfield says. “It’s about this subculture that’s coming to a close, the family we chose and how we will be remembered.”

The 16-member cast includes such familiar Richmond names as Andrew Firda, Susan Sanford, Jacqueline O’Connor and Landon Nagel. In light of the recent election, Satterfield says the show has resonance in that its characters are worried that their way of life may be threatened.

But Satterfield stresses that the show is fun, capturing the essence of the Big Easy: “It’s a party, it’s colorful, it’s exuberant.”

Those looking to get their Acts of Faith fix need look no further than TheatreLab’s “Grand Concourse.”

Set in a Bronx soup kitchen, the show stars Dawn Westbrook as Shelley, a nun who’s forgotten how to pray. When a college dropout named Emma (Katie Ellis) begins to volunteer at the kitchen, it pushes Shelley to a breaking point.

“She’s realizing that she’s not quite as dedicated to this as she thought,” says TheatreLab’s artistic director, Deejay Gray.

The play debuted three years ago at New York’s Playwrights Horizons, and Gray says it’s relatable to people struggling in their careers and lives. In addition to Westbrook and Ellis, the four-person show features David Clark and Joshua Gutierrez.

“This is kind of a hot show in regional theater, and it’s continuing our season with Women at War,” Gray says of the season-long theme. “It’s funny, it’s devastating, and it’s a great evening at the theater.”

For local playwright Bo Wilson, Firehouse Theatre’s production of his play has an interesting distinction: It’s the first of his works to be produced in Richmond that isn’t a world-premiere.

In 2014, Wilson won a contest that saw “The Boatwright” premiere in Grand Rapids, Michigan. The play concerns Ben (David Bridgewater), a 57-year-old recent widower who decides to build a boat in the middle of landlocked Kansas. When Ben agrees to let his neighbor’s troubled son, Jaime (Tyler Stevens), make a documentary about the project, the duo embark on a journey.

“It’s about two very different, lonely people who find each other, and each of them represents a way to feel better about the world,” Wilson says, adding that the play is “a quirky collision between a very old-school fellow and a very new-school fellow.”

For the first time in the play’s history, the production will incorporate live video into the show, which already has the technical demand of building a boat onstage every evening.

Asked about the comparison between “The Boatwright” and his play “In Service of the Queen” — which features a Victorian-era woman sailing to New Zealand to deliver live honeybees — Wilson sees a connection.

“I think that plays are inherently lengthy journeys, the outcome of which is uncertain,” he says. “There’s something inherently metaphorical about being in a boat.” S