No need to panic. It's likely that pro baseball will always have a home in Richmond. 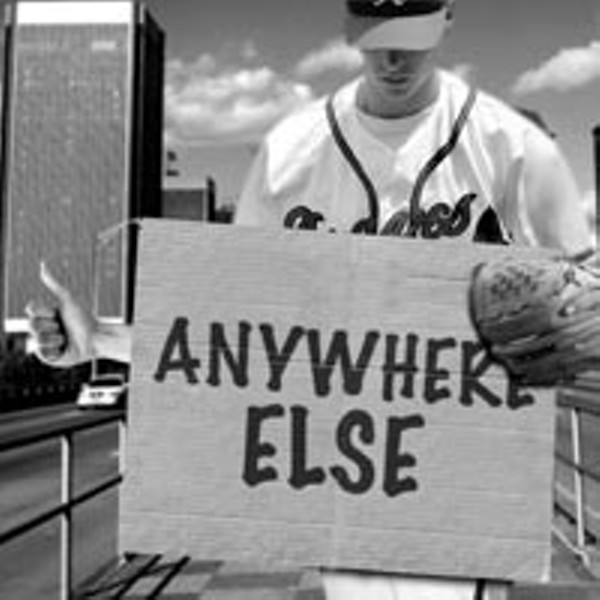 So what if the Richmond Braves leave?

As the debate over downtown baseball hits full stride, such a question wouldn't dare roll off the lips of Richmond's gentlemanly boosters — not in public, at least. But it is a legitimate pondering, one that deserves some scrutiny considering the Braves are this close to dropping the ultimatum, the big threat: If you don't build it …

It's the best-known secret in town, the one that public-relations folks and concerned ballpark proponents whisper into skeptical ears. The Braves are rumored to be long gone if the $330 million Bottom stadium project doesn't win the hearts of Mayor L. Douglas Wilder, of City Council, of the people.So what if the Richmond Braves leave?

As the debate over downtown baseball hits full stride, such a question wouldn't dare roll off the lips of Richmond's gentlemanly boosters — not in public, at least. But it is a legitimate pondering, one that deserves some scrutiny considering the Braves are this close to dropping the ultimatum, the big threat: If you don't build it …

It's the best-known secret in town, the one that public-relations folks and concerned ballpark proponents whisper into skeptical ears. The Braves are rumored to be long gone if the $330 million Bottom stadium project doesn't win the hearts of Mayor L. Douglas Wilder, of City Council, of the people.

Bluff or no bluff, the question looms: If the Braves leave, will they take minor-league baseball with them? Not necessarily. Those who follow the sport say the Richmond region is considered a strong baseball market by those in the industry. Other teams would undoubtedly be interested in locating here, they say. And it's likely Richmond would have plenty of teams to choose from, says Kevin Reichard, editor of Ballpark Digest, an online newsletter that follows stadiums and sports.

Reichard points to Greenville, S.C., a much smaller city than Richmond, where a three-way bidding contest erupted over who would replace the Class AA Greenville Braves, who moved to Pearl, Miss., last year. Just months after the Greenville Braves left, minor-league baseball allowed another team to move there, awarding the franchise rights for Greenville to Columbia, S.C.'s Capital City Bombers, a Class A Red Sox affiliate. The Greenville team was renamed the Greenville Bombers.

"If you are a good market, people are going to seek you out," says Will Lingo, managing editor of the national biweekly magazine Baseball America. Richmond, he says, is one such market.

There is, however, a catch or two. First, Richmond may have to settle for a Class A or Class AA franchise, instead of a top-tier Class AAA club such as the Richmond Braves. And regardless of class, most teams on the move want something else: a new stadium.

In Greenville, all three proposals to replace that city's franchise included new ballparks. The winning bidders, the Bombers, are investing $10 million to $15 million to build a new stadium by 2006 in a section of downtown Greenville not unlike Shockoe Bottom, with a strong residential base and vibrant nightlife.

Greenville traded for a lower class of baseball, but may have gotten a better deal. The Class A Bombers agreed to put up most of the money to build the stadium, reported the Greenville News, and, so far, the city has pledged only to forfeit the land, worth $4 million, and pony up $3.5 million for streetscaping.

Robert M. "Mike" Berry, general manager of the Richmond Metropolitan Authority, which owns and operates the 20-year-old Diamond, says the old stadium wouldn't necessarily be a deal breaker considering that the region was ready to commit $18.5 million to renovate The Diamond two years ago.

"While certainly not a new facility that a lot of teams would like to have," Berry says of The Diamond, "it would certainly be acceptable."

Without a new stadium, attracting another AAA franchise may be out of reach. But more than likely, some say, it wouldn't matter anyhow. There simply aren't any triple-A clubs looking for a new home right now, says Bruce Baldwin, general manager of the Braves. "Tell me what triple-A teams are out there?" Baldwin says. "There are no triple-A teams out there."

Certainly, none is advertising an interest in moving — not yet, at least. Baseball insiders say there is one team that may consider a move, the financially troubled Ottawa Lynx, the Baltimore Orioles' top farm club. But the Ontario club says it isn't looking.

"There's been no thought of Richmond at all," says Kyle Bostwick, the team's general manager. "We're not where we would like to be by any stretch … [but] our goal is to make this economically viable in Ottawa."

What's the real difference between single-, double- and triple-A baseball? Class AAA generally puts a "better product" on the field, Berry says. At that level, teams such as the Richmond Braves are grooming players for the major leagues, players such as Johnny Estrada, the big-hitting catcher who moved to the Atlanta Braves in 2003. (Last year, Estrada hit 76 RBIs and had a batting average of .314.)

Berry says if the local Braves left, the Richmond Metropolitan Authority would begin searching for a new team, preferably another AAA club. "I think we would continue to be a great location for triple-A. If that doesn't work for some reason, then double-A would be the next logical choice," he says. "I think we have a hell of a lot to offer."

Would the difference in quality affect fan turnout and the overall baseball experience? Probably not, experts say. The majority of people who attend minor-league baseball games do so for the "ballpark experience." While players such as Estrada can boost attendance, the impact is usually minimal.

"I think the average fan doesn't care," Baseball America's Lingo says. "It's really an inexpensive night out." That's true whatever class of team is on the field, he says.

Randy Mobley, president of the International League, in which the Richmond Braves play, says Richmond would continue to be an attractive baseball market if the Braves decided to leave. Even Baldwin agrees that Richmond would be attractive for any number of Class A baseball teams.

Still, Mobley says the decision to allow another franchise to move, either away from or into a new market, ultimately rests with minor-league baseball.

"Before any franchise can change any location, it has to be approved by the league," Mobley says, adding that he has had no discussions with the Richmond Braves about relocating. "Richmond is a good city for minor-league baseball."

Mobley says if the Braves requested and were granted permission to leave the city, other teams would certainly be interested in taking their place. "There would be a professional team playing in Richmond," he says. S