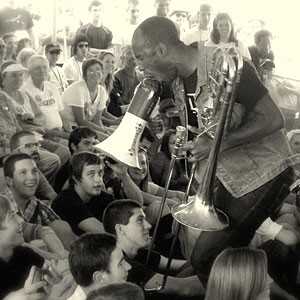 Every Sunday at 4 p.m. a swarm of young musicians gathers at the Black Hand coffee shop to listen, play, or perhaps most likely, do both. The place is tiny and eclectic: flat black ceilings, cream walls plastered with tear-away tab fliers, a floor mottled to hide irregularities, soda fountain stools, matching maroon couches and a coffee roaster. The bands have overlapping members; their music is alternately melodic and muscular. At the center is bass trombonist Reginald Chapman, a young player facing a crucial career decision just as he comes into his own on the local scene.

The Tidewater-raised Chapman probably is best known as a featured player in the No BS Brass Band, wading into the audience with his horn in one hand and bullhorn in the other belting out the lyrics to “Brass Scene Kids,” his anthem for the alternative jazz tribe of Richmond and Virginia Commonwealth University. He's part of the cadre of younger players following in the slipstream of slightly older leaders such as Matt White of Fight the Big Bull, Scott Burton of Glows in the Dark, and Reggie Pace and Lance Koehler of No BS Brass, who are putting local music on the national map.

Chapman formed his own band, UTV Chamber (from “Use the Vastness”), enlisting friends among the other young, and at the time, mostly unaffiliated players. The group set to work finding its own sound. The eclectic sextet includes saxophonists Marcus Roberts and David Hood, trumpeter Mary Lawrence and vocalist Chelsea Temple. The original drummer, Brett Ripley, left and was replaced by Devonne Harris.

Hood proposed a strategy for exploration. “We would set up simple parameters,” he says. “Start soft and get loud, have five players in a cycle of improvisation with only two playing at a time. Sometimes we would just play vignettes — going till we hit the first stop, whether that was in 30 seconds or five minutes.”

“We would play for hours,” Chapman recalls. “I wanted to have a band that was kind of meditative, based on accepting things as they come. We played totally free, just letting whatever happen. After we had run out of all of our stock ideas we really had to listen to each other; what came out then was way natural.”

Later, sifting through recordings from their early jams and early performances the musicians selected the parts that worked and used them as building blocks for more traditional compositions. The result is a set of material that unites stretches of egalitarian individuality with moments of sharp focus.

But just as the he was finding an independent voice on the local scene a new path opened. Chapman was paired with VCU guest artist Jim Pugh, a world-renowned trombonist who's played with everyone from Steely Dan to Frank Sinatra, in a performance of Daniel Schnyder's “Duo Concertante.”

Pugh's command of the challenging, virtuosic duet was familiar to Chapman. “I'd heard the tune fifty kazillion times on YouTube,” Chapman says. “I used to put it on and geek out.” After the performance Pugh offered Chapman a full scholarship to study under him at the University of Illinois at Urbana-Champaign.

But Chapman hasn't quite reached escape velocity. Leaving could launch a brilliant career, but UTV Chamber, along with membership in other bands including Murphy's Kids and Trio of Justice and especially the poised-for-breakout No BS Brass Band, exerts a strong gravitational pull. “The more I get a sense of Richmond pride,” he says, “the more I act like I am going to be here forever. But I know if you go off of history, Richmond is definitely a stepping stone.”

Whatever he decides, Chapman's career is just beginning, full of promise, with no guarantees. As his lyrics for “Brass Scene Kids” say, “The one thing is certain, it's uncertainty.” S

UTV Chamber plays the Black Hand Coffee Shop on Jan. 23 at 4 p.m. Admission is free. For information go to http://www.blackhandcoffeeco.com/category/blog/music.