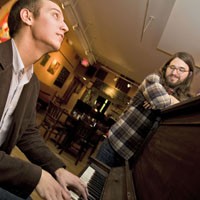 RVAjazzfest is a story in three parts. The baseline is the breakthrough of its organizer -— jazz blogger and Virginia Commonwealth University junior Dean Christesen — organizing his first event. Above that is the propulsive rise of Christesen's mentor Matt White, whose band Fight the Big Bull is depending on the festival's guest star for their upcoming recording project. And towering over it all is the guest, New York City musician Steven Bernstein, White's mentor and model, down from the big city on a provincial mission for hire.

Trumpeter Bernstein may not exactly be a household name, but over the past two decades he's carved a huge reputation in the coolest corners of contemporary music. Starting with alternative jazz band the Lounge Lizards, he soon was arranging Lizard leader John Lurie's music, including soundtracks for a string of era-defining (and Lurie-starring) Jim Jarmusch films and, most visibly, the 1995 John Travolta mob comedy “Get Shorty.”

Since that commercial breakthrough, Bernstein has worked as intense and varied a career as anyone in music. His multilayered, uncluttered scores and smart, convention-embracing-and-defying playing (including work on the seldom-heard slide trumpet) show up everywhere from National Public Radio to Nickelodeon to the Super Bowl (with Sting) to the Woodstock-based roots ensemble led by ex-Band drummer Leon Helm. He also leads a swarm of his own projects, including the genre-transgressing Sex Mob, the Sephardic soul of his Diaspora bands, and the ultra-modern and Millennial Territory Orchestra.

For a forthright musical mercenary, Bernstein was very generous with his time a few years ago when White first asked for lessons. Bernstein invited White to his home, fed him, spent hours listening to music, critiquing White's scores and giving advice. Last year he arranged a Fight the Big Bull gig at the Stone, New York's downtown Mecca of creative music. He also wrote the liner notes for its CD (“Dying Will Be Easy”) and no doubt his involvement did much to get it heard nationally. The Big Bull recording was reviewed in DownBeat magazine, featured on “Fresh Air” and chosen by an public radio critic as one of 2008's 10 best recordings.

The national response had a big impact. “It changed the ceiling for what we might be able to do, and inspired me to think this wasn't just a normal group some kid had,” White says. “Practically it changed nothing, it was still a challenge booking shows, and sometimes nobody comes, but it helps to have played dates in all those places.”

Bringing Bernstein to Richmond launches the next phase for the Big Bull. “We need a new record,” White says. “This thing with Steven ... I haven't looked to capitalize on it, but the last record got great reviews and this will make a nice story. It may give us concert potential; play real clubs… get on the festival scene, become part of the jazz conversation.”

That Bernstein's extended stay in Richmond synched with the RVAjazzfest is pure happenstance. “I've wanted to do an event like this since I started the RVAjazz blog in December of 2007,” Christesen says. In many ways Christesen's site fills the void left by the dissipation of the Patchwork Collective — the once highly-active Richmond arts organization founded by White, Scott Burton and Chris Elford. Although White's focus has shifted to his band, he's shared his experience and contacts in an effort to make RVAjazz a success. The blog www.rvajazz.com has become the go-to place for information about creative music that might otherwise pass under the radar.

Originally Christesen had invited Fight the Bull — White's original trio from which the big band Big Bull grew — along with Brian Jones' Boots of Leather and Scott Burton's ambitious and fun Glows in the Dark ensemble. Having Bernstein come to play with Fight the Big Bull elevates the event's visibility to a new level.

Bernstein's 10-day Richmond sojourn — five days to rehearse, write arrangements, run clinics and play the concert, five days for recording — will be a new experience for the trumpeter as well. “I've never made a record that took more than two days recording and one day of overdubs,” he says. “In New York nobody can afford this. … It's going to allow a much different process.” Somewhat surprisingly, given his pivotal championing of Fight the Big Bull, this will be the first time Bernstein has heard White's always-dynamic band live.

But if all goes well, for White, Christesen and Bernstein, this may just be a beginning. S