Brandi Carlile at Groovin' in the Garden 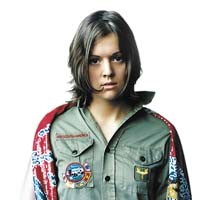 As most musical artists are discovering, one of the best alternatives to getting songs played on the radio is getting songs played on a hit TV series. Just as Death Cab for Cutie found a greater audience through repeated plays on the adolescent soap-opera “The O.C.,” singer-songwriter Brandi Carlile found hers on the similarly veined hospital drama, “Grey's Anatomy,” landing several tracks from her self-titled debut. With the groundwork laid, Carlile applied this momentum to her follow-up album, “The Story.” Presenting a somber and sober collection of contemporary rock — particularly with the starkness of her vocals — Carlile comes to Lewis Ginter Botanical Garden's summer concert series, Groovin' in the Garden, Thursday, May 14, at 6 p.m. Tickets are $20-$25. 1800 Lakeside Ave. 262-9887. — Mike Hilleary

CORRECTION: This version corrects the original, which said that the show was free.