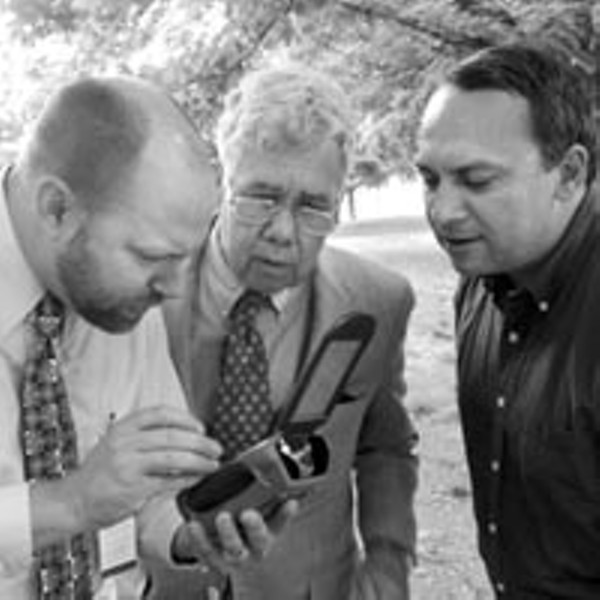 The inventory will help the city plan tree maintenance, says Karl Pokorny, urban forestry manager for the Urban Forestry Division of the city of Richmond’s Department of Parks, Recreation and Community Facilities. “It’s an excellent budgeting tool,” he says.

The information gathered — location, species, size, health status — replaces an out-of-date inventory the city compiled a decade ago. Since then, the city estimates its stock of street and park trees has grown by 33 percent despite Isabel’s devastation. The city’s urban forestry staff of 31 can care for only 3,100 or so of the 200,000 trees. And Pokorny says no money has been budgeted for new trees for 10 years. Neighborhood groups have taken up the slack.

Some city officials and residents say the surge of investment and widespread construction throughout Richmond makes attention to green space, particularly the appearance and health of trees, crucial to attracting new people and business to the area.

Volunteer Laura Cameron and her neighbors with the Historic Monument Avenue and Fan District Foundation got to know Pokorny and his wife, Rebecca, closely after Isabel. Pokorny had been at the job for less than a year when the hurricane leveled thousands of trees. Many city residents say they went weeks without power, but had their streets cleared in days. Credit Pokorny. “He’s the Ralph White of trees,” Cameron says, referring to city naturalist White’s reputation for being able to draw volunteers.

“He told us it’s not just a nice thing, it’s a critical thing,” Cameron says of Pokorny’s push for the tree count.

In January, Pokorny’s wife, Rebecca, an urban-forestry graduate student, started a 12-session program in which participants learned how to care for trees. Twenty-seven people took part. In exchange for the education, they volunteered to help plant, prune and count the city’s trees.

The Monument Avenue and Fan District foundation provided the seed money to jump-start the census that begins in the Fan and will extend citywide.

Technology drives the project. Karl Pokorny holds a device in his palm. It is a red hand-held computer — a Compaq Arc-pad — that is compatible with the city’s geographic information system of maps and grids. Any of the city’s urban forestry workers or volunteers can help with the census, thanks to the user-friendly computer and software.

The computer costs $800. The software — which replicates software used by the United States Air Force — is $300. The city plans to spend $4,000 to purchase more units.

The 20 or so tree trackers gathered today aren’t the bohemian sort. They carry cell phones and business cards and wear worker IDs around their necks. The men and women circle around Pokorny for a demonstration.

“This has a graphical interface to help locate objects on the ground,” he tells them. He moves to the north side of the median and stops opposite Dr. Wyatt Beazley’s house. “We’ll try that maple there,” Pokorny says, pointing to the left of the stately brick house. Beazley and City Councilman William J. Pantele huddle around Pokorny and observe.

From the Monument Avenue grid Pokorny locates Beazley’s house. He uses a stylus to mark the exact spot of the tree on the computer screen. Then he runs through a menu and picks from descriptive options. It is a sugar maple, 30 to 40 feet tall. Its crown diameter is 20 to 30 feet. Pokorny gazes up at thick leafy canopy. It appears healthy, so where the computer asks for a “condition” he enters: Good.

“We don’t have any real conflicts here,” Pokorny says, such as a telephone wire or a tree well that appears too small.

In a minute — about the time Pokorny says a trained worker or volunteer will be able to complete an entry — the maple is in the system, counted.

Pokorny, his wife and City Arborist Peter Girardi divide the group into teams and spread throughout the median, each subgroup with a computer. “It’s been shown in studies to reduce road rage where there are tree-lined streets,” Rebecca Pokorny explains to her group. She says anyone who wants to help with the inventory is welcome and can be trained easily.

Monument Avenue resident Ken Powell says the trees along this stretch of road shouldn’t be taken for granted. “We figure we lost 10,000 years of growth from Jeb Stuart to Arthur Ashe,” he says of the avenue’s tree loss after Isabel. It was a kind of reckoning, he says, adding: “I never realized what an urban park this is.” S

For more information on how to volunteer or take part in the city’s tree steward program, e-mail pokornyk@ci.richmond.va.us.