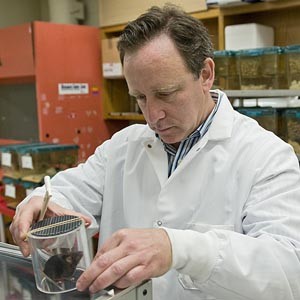 Move over California: Virginia's making waves in the world of weed. A team of researchers at Virginia Commonwealth University's School of Pharmacy and Toxicology is leading research in how cannabis affects the brain — more specifically, how pot mimics a naturally occurring, potlike chemical in the brain — with implications for alleviating political squabbles over medical marijuana.

Aron Lichtman, a professor of pharmacology and toxicology at the university, has studied cannabinoids since 1989, on the heels of the Reagan administration's “Just Say No” campaign and during a time when he says scientists “knew very little about how marijuana produces its effects in the brain.”

Since then, marijuana has been proven as a pain reliever with other therapeutic benefits. But it's also been discovered that naturally occurring brain chemicals called endocannabinoids produce effects similar to pot — and that the brain has a whole system for regulating them. Endocannabinoids are released in the brain as a response to stress and other environmental stimuli and have been shown to have a calming effect — decreasing anxiety and relieving pain. But they're only released in short bursts, quickly broken down by special enzymes, so the therapeutic benefit doesn't last.

Lichtman and other VCU researchers have conducted experiments with mice that artificially block the enzymes that break down endocannabinoids using either drugs or genetic manipulation. With the enzymes blocked, calming endocannabinoids flush the brain, increasing resistance to pain without the chemical dependence or adversely affecting learning and memory — some of the potential setbacks of pot.

Finding alternatives to weed is Lichtman's ultimate goal. Advocates of medical marijuana argue that smoking is the best way to ingest — when patients feel nauseated, they don't want to wait to digest pills. Lichtman and his colleagues Joanne Peart, Peter Byron and the late Billy R. Martin, a pioneer in marijuana research, tried to solve this problem when they invented an inhaler that would vaporize liquid THC, the main active ingredient in pot.

The inhaler was under development with two pharmaceutical companies. But when the economy tanked, the invention was dropped.