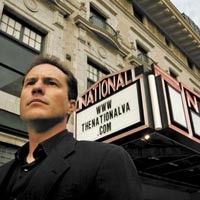 If Brad Wells is hinting that he wants to play in a band, there are subtler ways.

He's put on more music shows here than just about anybody. His companies, the nonprofit Sea of Sound Productions and the for-profit James River Entertainment, have stocked Innsbrook After Hours, Groovin' in the Garden and the State Fair of Virginia.

He started Sea of Sound 15 years ago to bring shows with a more positive message to Richmond, which sounds like code for Christian rock, and sometimes is. But it's indicative of a certain responsibility to Richmond audiences. It's outreach.

For those who enjoy their music with a little sin thrown in, Wells and partner Laurin Willis started James River a decade ago, and are responsible for — guilty of? — bringing bands such as Poison to Innsbrook and Ruben Studdard to the State Fair.

With Toad's Place open right down the road, Wells knows his music-booking strategies must be balanced to avoid flooding the market. “I think everybody has to be careful not to go to the same well all the time,” he says.

So he works behind the scenes, playing to ears of all sensibilities, and — perhaps — waiting for the day someone will ask him to join a band.