Boys from the ’Hood 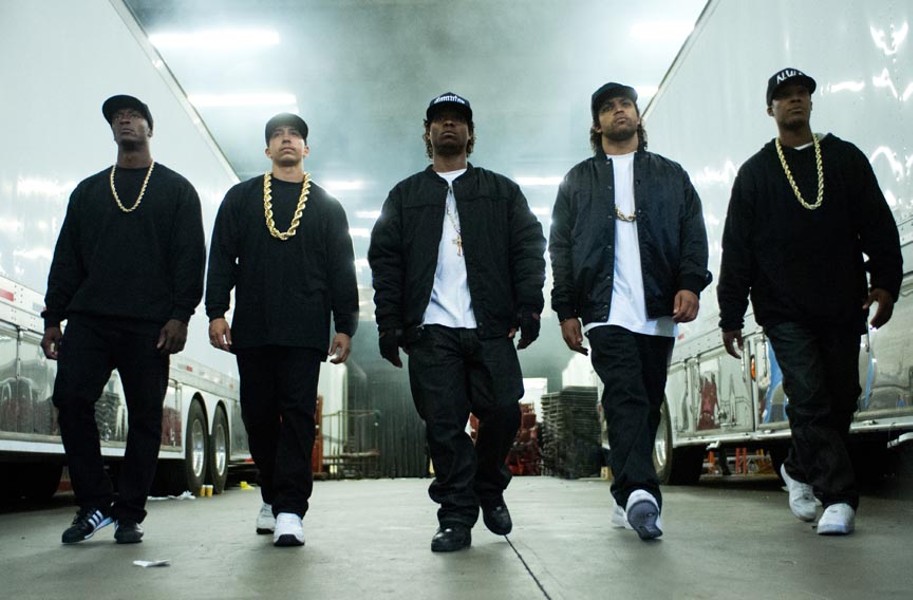 The rap group N.W.A. had a profound effect on American media and culture. The entertaining biopic about the group, “Straight Outta Compton,” hints at that phenomenon, but mostly shows what a profound influence the group’s success had on its members.

Taking its title from the group’s first and best-known album, the film charts the rise of N.W.A.’s members from poverty to worldwide renown — chief among them Andre “Dr. Dre” Young (Corey Hawkins) and O’Shea “Ice Cube” Jackson (played by son O’Shea Jackson Jr.). Part of the film’s appeal is seeing them before they even dreamed any of it could happen. All they wanted to be, in their words, was “ghetto superstars.”

When the film opens, the two are friends still living with their parents in the Compton area of South Central Los Angeles. Dre is a DJ at a local club and Ice Cube is an aspiring rap lyricist, penning rhymes on the school bus.

The duo’s impromptu concert one night is a hit, prompting Dre to approach his friend Eric “Eazy-E” Wright (Jason Mitchell), a small-time hustler, about fronting the money for a record label. Eazy agrees, sings on the first single (“Boyz-N-the-Hood”) and takes newly minted Ruthless Records on the road and into the offices of bigger labels with the help of manager Jerry Heller (Paul Giamatti).

The authenticity, humor and pathos in these early scenes elevate “Straight Outta Compton” from the typical biopic. Some of the film’s central figures also are its producers, and it has a palpable sense of detail that leavens the standard upward-rise saga with a lot of satire and self-effacement. The action is self-referential without even trying. An early scene with Ice Cube thrown down on a cop car by overzealous Los Angeles police officers seems straight out of “Boyz n the Hood,” the 1991 hit drama about growing up in South Central that the younger Jackson’s father starred in opposite Cuba Gooding Jr.

After Ruthless strikes a deal with Priority Records, the group releases “Straight Outta Compton,” an explosive album that helped coin the term gangsta rap and garnered as much ire as acclaim for its explicit lyrics and unvarnished depiction of life in the ’hood. The track “Fuck tha Police” especially drew attention, from the evening news all the way to the FBI. All of these events are played against a backdrop of ever-increasing success, with parties followed by bigger, more debauched parties, and escalating disharmony over money.

As N.W.A. fractures, the film shows its own tiny cracks. Although it never lacks for visceral detail or interesting turns of events, a large part of N.W.A.’s legacy gets left out along the way in favor of repetitious partying and feuding that makes the running time seem a little longer than necessary. Serious issues such as accusations of misogyny are skirted, and there’s little attention paid to N.W.A.’s fans.

The rappers didn’t only play to the urban minorities reflected in its lyrics and the movie’s concert scenes. It also played out of cassette tapes on the streets of places such as conservative, suburban Spotsylvania County. At 14, I was enthralled and amazed that such music was allowed to be sold in stores at all. No one had heard anything like it. It was a big deal.

It also was a different time, and you kind of had to be there to take that away from the film, whose allusions to the cultural shift are fleeting and subtle. Anyone born while N.W.A. was making noise would come of age when the group’s style had become the norm, and might leave the theater entertained but inured to the controversy.

Perhaps anticipating such a reaction, the film concentrates more on members’ personal successes and failures. Eazy dies of AIDS complications. Dre and Cube go on to become international stars. A large segment of their fan base eventually associates them more with Beats headphones and comedies like “Ride Along” than with gangsta rap. The film is in full celebratory mode at that point, but has forgotten what it wanted to say.

“Straight Outta Compton” contains copious if not gratuitous nudity, sex, violence and profanity. But with a subject like N.W.A., producers probably had to tone it down to get even an R rating. With all its attitude and fun, “Straight Outta Compton” looks like a late summer hit. Exploration of the group’s political and cultural impact is too minimal to call it a classic, but the omission won’t keep audiences from enjoying the back story of these boys from the ’hood. (R) 150 min. S