Uncle Ty-rone keeps it clean for the kids. 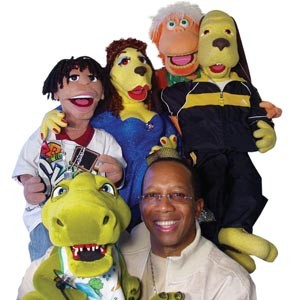 Back in 1984, Ty-rone Travis worked up a cult following performing in nightclubs. Money and women rained down, and he found himself opening for big celebrities in town — then-major acts such as Ready for the World, New Edition and Freddie Jackson.

Travis didn't open for them by singing. He was a comedian with an uncommon shtick, working with a foul-mouthed puppet named Tilford. Travis, raised in a religious household, these days is reluctant to recant the dirty pearls that would fall from Tilford's mouth. But suffice it to say, “the puppet was nasty,” he says with a deadpan look.

Fast-forward to today: Travis has realigned with his faith; Tilford is dead (well, propped up in a storage unit, creepily staring straight ahead); and new, more appropriate muses have taken Tilford's place. Indeed, there's a whole crew — a dog, a dinosaur, an orangutan — all of them so inoffensive (and, let's not forget, funny) that nothing they'd ever say would be inappropriate for elementary-school kids. Which, as it turns out, is exactly whom this new show is for.

“Uncle Ty-rone and a Box Full of Fun,” a show honed by Travis after years of gigging at festivals, schools and a three-year stint at Busch Gardens, is Travis' attempt to merge passion and propriety. And apparently the kids love it.

“Initially,” he says of his Busch Garden days in the early 1990s, when he'd perform on the park's open-air streets, “there were only like five people. But by the fifth year, the crowds had gotten so big they had to put me on stage.” Initially he had jitters, he says, particularly coming from urban comedy. But he soon found — with the help of Bill Cosby tapes and some divine guidance — that observational humor transcends demographics and needn't be crass to resonate.

He chuckles. “Kids will be screaming, ‘Encore! Encore!'” he says. “I don't even know how they know what that means.”

After playing places as varied as holes in the wall and cruise ships, Travis is looking to conquer comedy clubs. This week he brings his act to the Richmond Funny Bone, a comedy club heretofore known to entertain adults in the evening. (Parents will be glad to know that there's no two-juice-box minimum for this matinee.)

Travis' curmudgeonly Uncle Ty-rone character is the headmaster of the act, and each of the characters has a purposeful bent: reading, fitness, community service and so on. To be sure though, the kids aren't being lectured to, or forced to sit through something they aren't into. (They especially love the audience-participation Hula-Hoop finale.) If they were, Travis says, everyone would know.

“Children are real,” the kids' comedian says. “They'll let you know if you're funny or not.” S