Sure, pimento cheese and roasted Brussels sprouts still may find their way into diners’ hearts. But Richmond is slurping up a new love: Ramen. 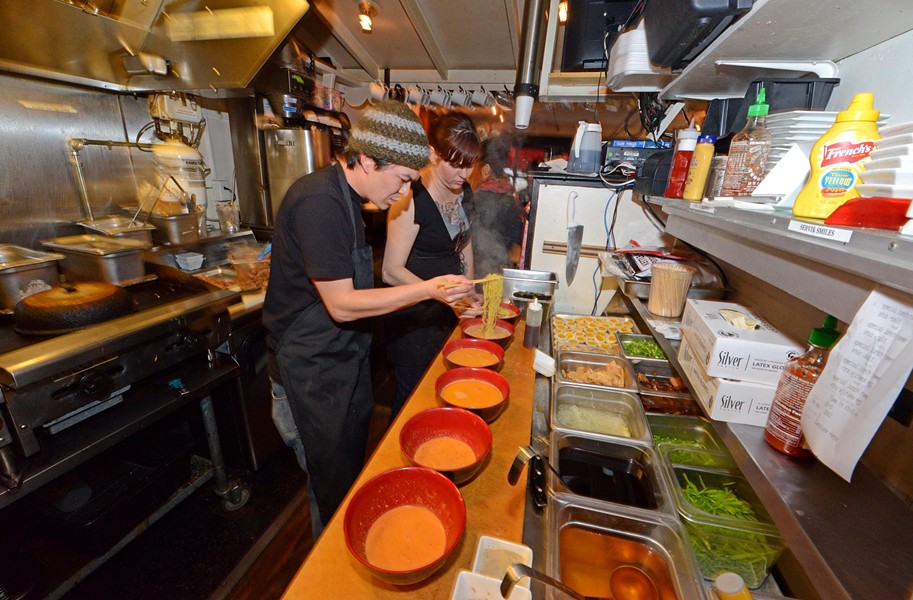 Scott Elmquist Shoryuken Ramen’s Will Richardson serves up noodles every Monday and Tuesday night through April at Lunch on Summit Avenue.

If you could name the trendiest trend of all in Richmond right now, what would be your first guess? Hint: It isn’t gourmet Cheetos, but we can dream.

Think about it for a minute. A good guess would be roasted Brussels sprouts, a trend that I love, but seemingly everyone around me hates.

As for pimento cheese, reviewer Karen Newton has had enough, and she says: “Go ahead and stone me.”

And haven’t we all eaten enough kale to keep us healthy at least until next year?

Critic Don Baker is ready to put the leafy greens behind, along with mac ’n’ cheese, cupcakes and doughnuts, while Robey Martin is over music on restaurant websites. She isn’t fond of kale Caesar salads either.

“What I’d love to see is a continued proliferation of specific international and regional cuisine,” Matthew Freeman says. “Richmond has seen too much fusion and generic food.”

And where’s the Virginia wine? “I continue to marvel at restaurants claiming local sourcing who carry not a single Virginia wine while touting a plethora of Virginia beers,” Newton says. “Virginia wines have come a long way, baby, and if they’re not on your list, your farm-to-table claim doesn’t have a leg to stand on.”

Rachel Machacek is fine if the doughnuts keep on coming, and she also loves the taco trend too. Charcuterie also has been holding steady for a long while, but Freeman is fine with that. “The variety of preserved meats, from simple salt cures, to more complex terrines and confits,” he says, “offer endless possibilities in flavors and textures to explore.”

But back to the initial question. The biggest Richmond food trend is one that was declared dead this year in food quarterly Lucky Peach by David Chang of New York’s Momofuko. He’s the chef who arguably lit the ramen fire and watched it spread throughout the country.

Richmond is paying no mind. Foo Dog staked the first claim on ramen, and such places as My Noodle & Bar and Grace Noodle followed. It can’t be classified as authentic ramen, but JKogi Seoul Street Eats on Second Street serves Korean-inflected, choose-your-own noodle bowls, and Carytown’s Spiral Noodle will offer something similar, by way of Hong Kong, this spring.

Diners love something they can’t get and the pop-up Shoryuken Ramen has made the most noodle noise, partly because it’s serving great bowls of ramen and partly because you can get it only on Monday and Tuesday nights at Lunch — and only through April.

And speaking of pop-ups, Newton hopes they’ll continue trending too. “Pop-ups can be powerful tools to further the cause of adventurous eating,” she says. “It’s a win-win when chefs get to play and customers reap the tasty results.”