Pho isn't a fad — it's a competition. 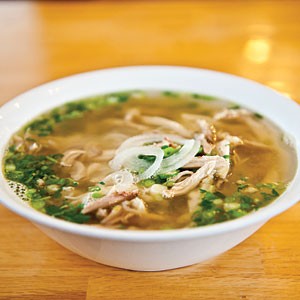 It's all about the broth, the heart and soul of any bowl of pho. While many Vietnamese restaurants serve the popular rice noodle soup, the better ones distinguish themselves by the flavor of their beef broth. The traditional broth is made with a combination of marrowy beef bones, charred onion and garlic, spices that often include star anise and cloves, salt, fish sauce and yellow rock sugar. And time to simmer — often eight to 12 hours. Good broths are translucent, and can be transcendent if prepared well.

The soup was first made in Vietnam more than a century ago and was sold by street vendors before the first restaurant opened in Hanoi in the 1920s. Often eaten for breakfast, it combines Asian and colonial French influences, and some historians claim that its pronunciation is tied to the French word, feu, meaning fire, a reference to the charred onions that give the broth a distinctive flavor. While many folks Americanize its pronunciation as “foe,” it's more accurately pronounced “fuh.”

Richmond has an abundance of Vietnamese restaurants that serve it as part of a larger menu, and a host of others that specialize in it. Here are some options:

Pho So 1
Located in the Crestview neighborhood behind Full Kee off Horsepen Road, Pho So 1 usually is packed, and often with a predominantly Asian crowd. Service is a bit off at times, and the atmosphere is lacking, but the food more than makes up for it. I find myself here almost weekly, ordering the same dish, the No. 12 ($7.25) pho  tA­i chA-n (with brisket and sliced eye round steak). Pho So 1 is notable for its broth, almost silky with the richness of the marrow, slightly sweet and savory at the same time.

Pho Tay Bo
Just down the block behind Pho So 1, in one of the few older houses in a gentrifying neighborhood, sits the humble Pho Tay Bo. The smallest and funkiest of the group, it's like walking into someone's home from a bygone era. Folk art murals of farmers and water buffalo adorn the walls, juxtaposed with strange cutouts of buxom women who hover like waitresses ready to take your order. The pho ($6) is very good, with a rich broth and some of the most generous meat portions around.

Pho 79
Sitting on Staples Mill Road just east of the train station, Pho 79 is like many such places in town — short on atmosphere and long on flavor. Goi cuA3n (fresh spring rolls, two for $3.15) are plump and served with a spicy peanut sauce. The pho ($7.35) is better than average, with a clear broth, a bit sweeter than some, redolent with clove and anise undertones. Like its menu says, It's Pho King Good!

Friend or Pho
One of the newcomers to the Richmond scene, its cutesy name that plays on the mispronunciation earns it a first strike. The second strike comes with a basket of unshelled peanuts. Edamame would make more sense. Strike three comes with its bowl of pho ($7.95). Before I even taste the broth I sense a problem. The dark brown color suggests beef bouillon, and I can barely manage a few bites. A beef short rib starter ($7.95) also misses the mark with a cloyingly sweet glaze. On the plus side, it offers a range of well-selected draft beers and has become a hot nightspot. If only its food matched up.