The Richmond Symphony’s fall season includes the search for a new artistic director and the return of a trailblazing conductor. 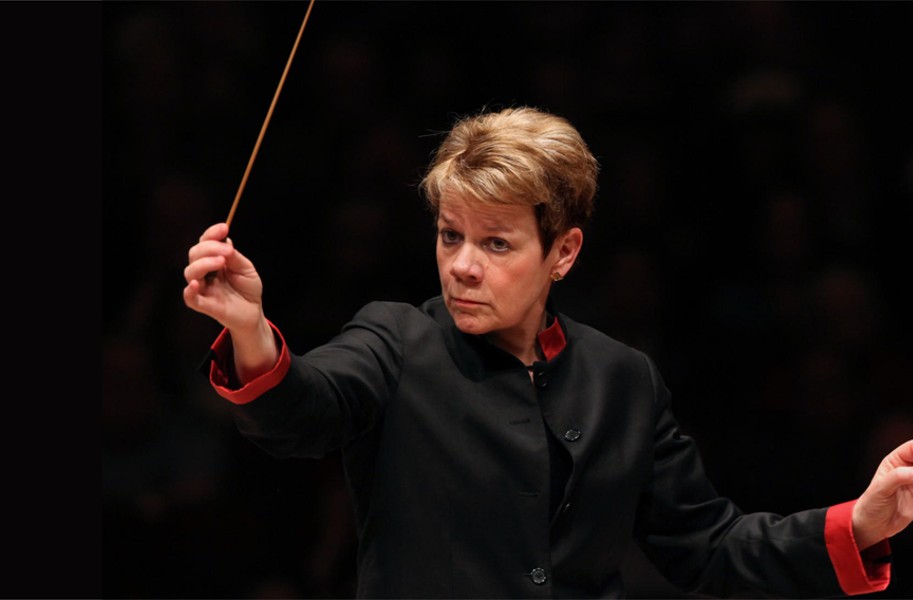 Conductor Marin Alsop returns to the Richmond Symphony on Sept. 21.

When conductor Marin Alsop picks up the baton with the Richmond Symphony on Sept. 21, it will be a homecoming of sorts.

"That was her first position," says Fisk of Alsop's role with the Richmond Symphony. "We were one of the first orchestras to employ a woman conductor. It's amazing to have to say that, but that was true at the time."

Alsop went on to study under composer and conductor Leonard Bernstein, conduct many of the world's major orchestras and be awarded a MacArthur genius grant" in 2005. This month, Alsop returns to the Richmond Symphony for a night of Johannes Brahms, Igor Stravinsky and others, joined by virtuoso Korean violinist Inmo Yang and the orchestra's chorus.

"She's an amazing leader in the field, and has been a mentor now to many, many conductors," Fisk says of Alsop. "We're honored to have her back. She wouldn't normally play with an orchestra like us, to be honest, because she can pick the best in the world in any country."

Alsop and Yang's appearance is just one of many highlights of the Richmond Symphony's fall season. On Sept. 14, the it will play the outdoor Three Chopt Festival, alongside big band the Reflections, klezmer band Heavy Shtetl and jazz band Doctors of Jazz. Proceeds from the festival will be used to support music and art education in the Richmond Public Schools.

On Oct. 5, musician Michael Cavanaugh will perform "The Music of Elton John," a tribute to Sir Elton accompanied by the orchestra. Fisk says that Cavanaugh — who is perhaps most famous for starring in the Billy Joel musical "Movin' Out" on Broadway — "amazed our audience when he was here a couple years ago doing the music of Billy Joel" in a similar event.

Following former music director Steven Smith's final concert this past May, the Richmond Symphony is now in the midst of the public phase of picking its next artistic leader. This season, the public will get to experience the top five contenders for the position at the helm of the Richmond Symphony, starting with Roderick Cox. Cox will conduct a handful of concerts in October.

"He is making a big impression on the classical music world. He is conducting orchestras all over the place," Fisk says. "He was the associate conductor in Minnesota for a few years, but he's been winning prizes and getting international attention, and we are delighted that he is kicking off [the musical director tryout series]."

On Oct. 17, Cox will conduct the symphony at Hardywood Park Craft Brewery as part of the orchestra's Rush Hour series. He'll also conduct on Oct. 20 at Randolph-Macon College as part of the symphony's Metro series, then a Masterworks show on Oct. 26 at the Dominion Arts Center.

Fisk also highlights the symphony's LolliPops series, which will perform "Wild Wild West," a concert celebrating the musical stylings of Westerns on Nov. 2.

"Come in costume," Fisk says. "We've got lots of good movie tunes, and [Aaron] Copland and John Williams and all kinds of terrific tunes for the kids."

Comparing the rootin' tootin' good times of the LolliPops show with playing a festival and having one of the world's most accomplished conductors in the same half season, Fisk says it's all part of the symphony's effort to reach people.

"I just love the contrast," Fisk says. "That's what we do. We're out and about in Richmond with these big community events, followed by the kind of concert that showcases the best of what we can do in our home in the Carpenter Theatre."

The Richmond Symphony will perform at the Three Chopt Festival on Sept. 14 at 6 p.m. at Bandy Field Nature Park, 6800 Three Chopt Road. "The Return of Marin Alsop" will take place Sept. 21 and 22 at the Dominion Arts Center, 600 E. Grace St.