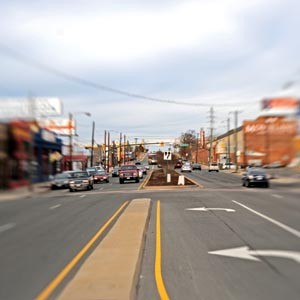 Is it any wonder north Boulevard faces an identity crisis?

It's an entrance to the city — a true boulevard — but it has no guiding vision. “The Boulevard's still kind of anonymous right now,” says Shelli Jost Brady, an architect and president of strategy firm Alchemy.

It won't be that way for long.

Mayor Dwight Jones has stated in no uncertain terms that he wants to build a new baseball diamond right there. “I believe the new stadium on the Boulevard can be the catalyst for significant development along this major corridor,” he said in his recent state of the city address.

The land around The Diamond is among the largest undeveloped sites in the city. It may also represent the city's best hope to attract large-scale retail (think Best Buy and Target). But it's also a complicated area. A good 39 acres belongs to the city, including the Arthur Ashe Jr. Athletic Center. The Diamond belongs to the Richmond Metropolitan Authority, which answers to the city, Henrico and Chesterfield counties. Virginia Commonwealth University owns Sports Backers Stadium next to The Diamond.

East of Hermitage Road, the state owns 19 acres used as an ABC distribution center. Then there's the nearly 9-acre Wyeth factory property, which sits vacant. Closer to Broad is the vacant, graffiti-tagged former Famous Foods of Virginia cookie factory, owned by developer Douglas Jemal. All this adds up to a lot of hands in a lot of development potential in the heart of the city, right off interstates 95 and 64.

In 2008, a group led by developer Highwoods Properties put together a plan to construct a grand Boulevard Town Center with condos, “medium-box” stores, local shops, restaurants and offices on the site occupied by The Diamond. It would be the city's best chance of filling a big hole in the retail market, Highwoods said. “Imagine the hum of activity all these stores will generate, as well as the sound of tax revenue flowing into city coffers,” the company pitched.

But that plan, which was dependent on the Shockoe Bottom ballpark proposal backed by Mayor L. Douglas Wilder, fell through. The only major change to the Boulevard in recent years has been the much-praised Movieland at Boulevard Square, a 17-screen theater that opened in February 2009.

It appears that developers are waiting to see what happens with a new ballpark, and the economy, before throwing out any more big proposals. Brian P. Glass, a commercial retail broker for Grubb & Ellis, says he doubts retailers will lead the way before they see more residential development in the area. “The retail will depend on rooftops,” he says. “It will not depend on sports facilities.” Plus, Glass notes, there's another perfect retail site, the old Azalea Mall, sitting vacant just to the north.

People shouldn't have to wait to shape their own vision for north Boulevard, City Councilman Charles Samuels says. He's urging 2nd District residents to say what they'd like to see in a series of interactive meetings. The result will be a report demonstrating the community's desires that the city can show to developers.

The first session, held in January, tried to gauge what people thought about the state of north Boulevard and Scott's Addition. A few people tossed out such words as “awesome,” “diverse” and “great.” More people said “neglected,” “industrial” and “dirty.”

Participants named some villains too. These included the Greyhound bus station, which many said they'd like to see moved, and the two strip clubs in Scott's Addition. One person suggested that the Tri-Angle Adult Book Store would be the perfect spot for a Starbucks.

At last week's meeting, approximately 30 attendees drew on maps, talked in groups and decided their biggest priority was developing the area around the ballpark into a multiuse destination. They approved of bringing “small box” retail to the area, like a Trader Joe's or other grocery store, just as Highwoods had proposed three years ago. They also wanted to improve access to the Boulevard from both the north and south.

A few attendees were skeptical their ideas would have any effect. Joe Allen, a Boulevard property owner, recalls 10 years ago when the city “came to us with this huge plan” for the Boulevard. Allen helped gather 50 business owners, he says, who met for a year and then told officials what they thought. The city ignored them, he says. The only change they saw was the loss of center-street, diagonal parking on the Boulevard, replaced with a pretty, new median and insufficient curbside parking.

Another big question is the future of Scott's Addition, the largely industrial but increasingly hip district just west of the Boulevard. The area's most prominent investor was Justin French, the disgraced real estate developer who recently pleaded guilty to wire fraud and engaging in unlawful monetary transactions.

French made a habit of buying properties for more than they were actually worth, says Scott Douglas, a senior vice president at Thalhimer Commercial Real Estate, who's sold about 40 properties in Scott's Addition over the years. As a result, Douglas says, “the leasing and sale prices around Scott's Addition have to recalibrate a little bit.”

The buildings are older, too, he says, and don't have all the amenities that companies prefer, such as roomy loading docks and modern sprinkler systems. Nevertheless, he says, businesses are still showing interest in the area. A company called Party Perfect just bought the Brass Beds of Virginia building. A microbrewery signed a lease last week. “We're doing some deals,” Douglas says, “but it's slow.”

Something's bound to come to The Diamond's setting, Douglas says, especially if the city sweetens the deal for developers with tax breaks and other incentives. The reason is simple, he says: “It's too good a place on a map.” S