The downtown business community gets a sneak peek at the mayor’s plan for baseball in Shockoe. 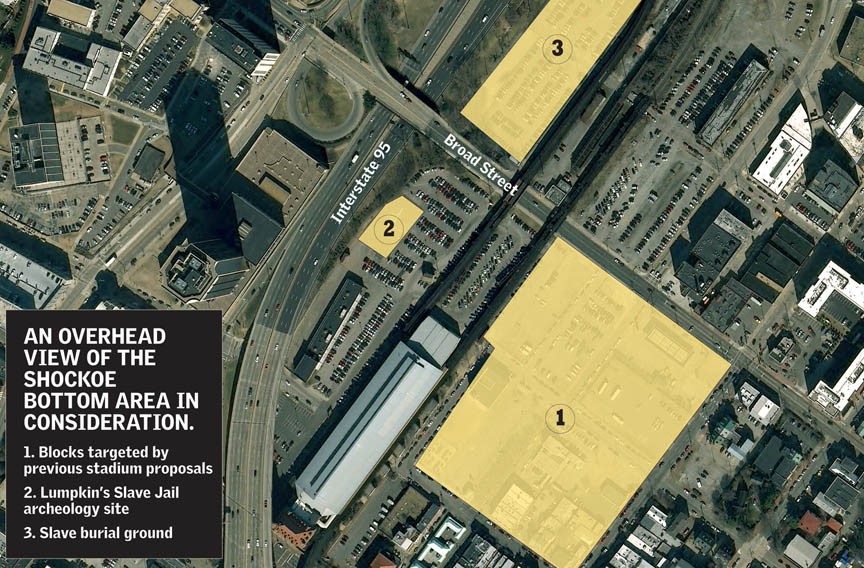 While the public waits for official word on Mayor Dwight Jones’ plan for a ballpark in Shockoe Bottom, on Friday morning the local business community got a sneak peek at what’s in store.

Jones briefed 35 members of Venture Richmond’s board during a meeting at Newmarket Corporation. Jack Berry, the downtown booster organization’s executive director, said the overview was met with “enthusiastic, unanimous support” by the CEOs and nonprofit directors who make up his board.

Berry declined to characterize the presentation, but City Council President Charles Samuels, who was in attendance, described it as a high-level overview of the plan.

Samuels and others briefed on the plan say it targets the four blocks bounded by Broad, 18th and East Franklin streets and the train tracks.

It calls for a ballpark bordered by street-facing, mixed-use development, specifically a grocery store, 120-room hotel and apartments. The administration has yet to disclose the brand of the store or the hotel, but suggested it has obtained commitments. The mayor is expected to release those and other details when he unveils the plan publicly Monday.

The plan also calls $15 million in utility improvements, sources say, as well as plans for a slave history heritage site, arrangements for which Style covered in detail in this week’s cover story.

Samuels says Jones indicated at the Venture Richmond meeting that the city would be looking to the private sector for donations to help finance the heritage site or museum.

Jones has been expected to propose two potential development tracks -- one that moves the ballpark to the Bottom and one that keeps it on the Boulevard. Samuels said the administration seems to have settled on the Bottom.

He says the mayor’s staff has determined that a Shockoe Bottom ballpark and the subsequent development of a mixed-use shopping district on the Boulevard would generate $187 million in tax revenues for the city over 20 years compared to $91 million over the same time period if the ballpark remains on the Boulevard.

Samuels confirmed Berry’s account that the Venture Richmond board was “universally supportive” of the mayor’s plan. Venture Richmond’s mission is to promote the development of the city’s downtown district.

But while the business community seemed impressed, Samuels says he still has reservations and will be looking for feedback from his constituents. Chief among his concerns are how seriously the administration vetted an option that would keep the ballpark on the Boulevard.

“Mathematically, the numbers do look good,” he says. “But for me, what’s difficult to deal with is that City Council really wanted two fleshed-out plans, and I’m not confident that’s what we’re getting.”