The city’s plan to revitalize Shockoe Bottom skirts the bigger obstacles, and stakes the area’s future on a glowing, empty shed. 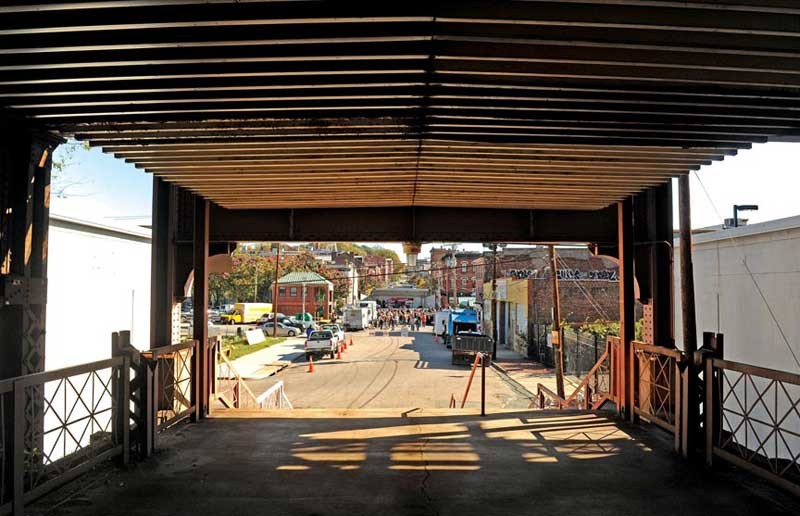 If it were a joke, it might be cruel. After two years of study, and more than a decade of hand-wringing, Mayor Dwight Jones unveils a grand vision for Shockoe Bottom that revolves around sprucing up an empty train shed — so that it glows at night for gawking motorists on Interstate 95. It’s not a punch line. The shed is the centerpiece of the city’s new marketing campaign aimed at turning the neighborhood into a creative, innovation-economy district.

Forget for a moment that the plan might actually make sense — that the city is resisting the temptation to overpromise retail development that it can’t deliver, or a new ballpark misleadingly billed as costing taxpayers nothing. In the end, Jones, now clearly running for re-election in 2012, is staking a portion of his political future on a giant, empty building with no tenant prospects.

This, Jones says, is what growing by “design and not default” is all about.

“It’s not a quick fix, but it lays the foundation for meaningful and strategic growth over the next years by making wise investments for the future and by establishing a development theme and framework that seems to harness the neighborhood’s strengths for their maximum impact,” Jones says.

Got it? Don’t worry, the getting is still a few years off. Last week’s presentation of the Shockoe Economic Revitalization Strategy was more or less an admission that the Jones administration doesn’t know, specifically, what it wants to do with the long-troubled district, replete with pretty lofts and sporadic gunfire.

“Urban development does not take place via the silver-bullet method,” explains Peter Chapman, deputy chief administrative officer for economic and community development. “This is about heavy lifting and creating a framework that is going to be favorable for long-term growth and development of Shockoe Bottom.”

The current strategy is ambitious, but decidedly light on details. There are multiple phases — starting with broad-brush rezoning to create a “more coherent mixed-use urban neighborhood” — and lots of marketing, and still more meetings to decide how to make the Bottom friendlier to pedestrians, connect public spaces and spruce up existing buildings and sidewalks. Overall, the strategy attempts to do the little things to make the area attractive for development.

There’s only brief mention of the biggest obstacle for the largely undeveloped portion of the Bottom north of the 17th Street Farmers’ Market — its location in a flood plain. Development here requires the addition of an elevated access route capable of ushering through large emergency vehicles. The city identifies $70.9 million in needed improvements to the Bottom, including $28.9 million for the train shed and $1.1 million to expand the farmers’ market, but nothing for an access route.

“The big concern for us is development in the flood plain,” says David Napier, president of the Shockoe Bottom Neighborhood Association, who doesn’t see much substance in the city’s new strategy. “The question is what are we marketing? Are we marketing that raw, open land for future development, and if so how do we get the infrastructure fixed?”

Like the recent threat from the owners of the Richmond Flying Squirrels to leave if the city doesn’t move more quickly on plans for a new ballpark (remember the Richmond Braves, now the Gwinnett County, Ga., Braves?) Shockoe Bottom has straddled Jones’ first three years as mayor. Shortly after taking office in January 2009, Jones was confronted with a controversial plan by Highwoods Properties to build a $363 million ballpark-anchored retail and residential development. The company was selected as the city’s development partner by previous Mayor L. Douglas Wilder in fall 2008.

That plan, in fact, started with a city request for proposals to develop the vacant properties north of the farmers’ market, long prone to flooding and repellent to commercial developers. The real genius of the ballpark plan, say proponents, was its design: The stadium included a concourse that doubled as an access route for emergency vehicles if the area flooded, a critical fix that opened up vacant land to development.

Of course, there were other problems with that proposal. It required tax-increment financing, which diverts tax revenues in the district to pay for the project, in essence subsidizing retail that siphons dollars away from nearby, tax-generating restaurants and retailers. And there were a host of political issues.

But the ballpark did solve the flood-plain problem. The city’s new Shockoe strategy barely addresses the issue, other than to suggest that tax-increment financing could be used for unidentified infrastructure improvements. It may also explain why there have been renewed rumblings about a Bottom ballpark. Local businessman Bryan Bostic, who worked with Highwoods two years ago, made an appearance at last week’s presentation. He still holds that the Bottom is the best place for a new ballpark, but doesn’t want his interest in the city’s Shockoe strategy misconstrued. “I came here as a citizen,” he says.

The bigger question, though, has little to do with ballparks. Three years in, Jones hasn’t shown much of an ability to execute singular-focused construction projects — think schools and the city jail — so there’s a healthy skepticism that his administration can implement such a wide-ranging, long-term strategy to resurrect the Bottom.

Marketing the area — something like “Shockoe Creates or Shockoe Creative,” Chapman says — is the first step. But this isn’t new territory. There was a brief push in 2000 to rebrand the area as the Silicon Bottom during the dot-com boom. Then there was the River District Alliance in 2002, which most closely resembles the current strategy. That effort was an attempt to bottle the creative energy that trickles out of Shockoe Slip, and rebrand the Slip, Bottom and the Canal Walk as a single creative community. It failed to gain any traction.

Revamping the train shed, however, is a start. Trumpeted as the key “catalytic concept” that consultants recommend for kick-starting development, the shed renovation will begin in June and is expected to be complete by 2014. It was formerly a marketplace, the remnants of which still remain on the second floor. The new facility will include glass walls and a timber roof, says Jeannie Welliver, project development manager for the city’s Department of Economic and Community Development. There will be bike rentals, a welcome center and a thoroughfare from Franklin Street. The city’s calling it a multimodal transportation center, but officials are careful not to mention that the GRTC Transit System bus transfer station — long envisioned at Main Street Station by its former chief, John Lewis — was nixed by the mayor more than a year ago.

The Bottom’s future, in other words, will start with a big empty building.

“We are going to use this architecture in the restoration of our train shed, as we open it up and put glass along the walls, and new roof … and create this iconic gem and captivate people to stop, come to Richmond,” Welliver explains. “We need to embrace it, brand Shockoe as that creative center for Richmond’s innovation economy, utilize this building as an iconic representation to that and tell the world … who we are.” S