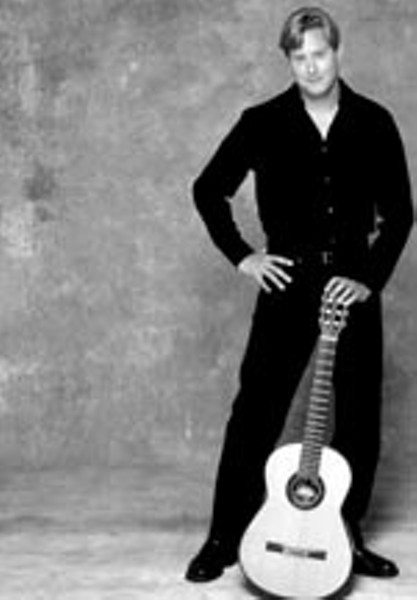 Eleven years later in 2003, Vieaux found himself back in Richmond as a guest of the Shanghai Quartet at the University of Richmond. "Richmond is a special place for me," he says. "It was here that I was personally introduced to Pat Metheny, a jazz guitarist that I admired and was in the process of recording some of his arrangements at the time I met him."

Vieaux is returning to Richmond again, this time with a program of music including works of Vivaldi, Joaquin Rodrigo, Mauro Giuliani and Mario Castelnuovo-Tedesco.

Besides performing as soloist, Vieaux plays with flutist Gary Schocker. "In a concert," Vieaux says, "the flute is the one instrument you can pair with guitar and still hear the guitar without having to amplify it." That congruent sound of the flute and guitar can be heard on Vieaux's latest CD recording, entitled "Arioso." This seventh major release of Vieaux's includes a selection of works by J.S. Bach. It's purely Baroque.

Born and raised in Buffalo, N.Y., Vieaux became addicted to his parents' record collection, which contained no classical music. Instead, he fell in love with the Beatles and many of his dad's jazz records. "We were a poor family and since my mother couldn't afford to buy me a piano I got a $50 guitar," Vieaux recalls. At age 6, he could read music and at age 8 he began taking formal lessons with guitarist Jeremy Sparks. "Unlike many kids, I never wanted to quit and I always practiced," Vieaux says.

Now as the head of the guitar department at the prestigious Cleveland Institute of Music, Vieaux will take a student who displays an attitude of discipline and an innate desire to work hard over a student with more talent. "I want someone who has a desire to apply my instruction to their work every day," Vieaux says.

Vieaux hopes to keep playing for as many people as he can, with his ideal audience member being anyone who's open to experiencing music. He'll continue to integrate all kinds of music in his programs and introduce his audience to new music by explaining it before playing it. For Vieaux, the future couldn't look better. Especially now that he knows to stay away from the football field. S