Seeing America through the eyes of a real Borat — a local painter from Kazakhstan. 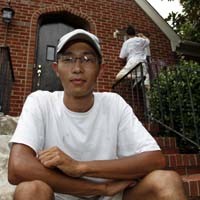 Uncomfortable probably best describes my first interaction with Chingis Dauletkanov. The lanky laborer arrives early one morning in July to begin painting my house, and the awkward conversation strongly suggests language will be an issue.

“I'm sorry, I don't understand,” he says with a heavy Eastern European lilt. He's at a loss to understand what color my wife wants for the back door, a frustration that echoes across the yawning 5,700 miles separating our versions of the Queen's English.

“I speak Russian,” he says, “and a little English. And I speak my native language. I am from Kazakhstan.

“You know, Kazakhstan?” he continues, his accented English punctuated by a nervous burst of laughter. “Did you see movie ‘Borat’?”

I find myself shifting uncomfortably when I profess that I haven't. Luckily, he doesn't ask if I've seen the British television show that preceded it.

It's well understood that the popular film starring Sacha Baron Cohen, a forerunner of the recent “BrA¬no” movie, did no favors in promoting international understanding of the ninth largest country on the planet. What's less understood by many of the movie's fans is that the Borat on the big screen bears little or no resemblance to the Borat in my backyard.

In his third year studying power engineering at East Kazakhstan State Technical University, my own Borat not only has electricity in his home but also focuses on design of modern electrical power plants. This 21-year-old, who arrived in May as part of a work-study exchange program, clearly is way overqualified to paint my house.
He speaks three languages. I barely sp
eak one. But despite my handicap and his thick accent, during the next few days we strike up an ongoing dialogue, tangential to my occasional nitpicking over caulking around windows.
In one very important sense, Chingis is not unlike the fictional movie's eponymous Kazakh. Both came here in their own way for cultural learnings of America for make benefit glorious nation of Kazakhstan.

Basically, Chingis came to learn about the mythical American dream — that, and his dad told him he'd buy him a new car if he got a summer job. To be kind to the “Regular Joe” Americans he's encountered since arriving in May, Chingis' make benefit cultural learnings have provided for a mixed bag.

“I met one man, he was 45 years old. I asked him, ‘What do you think about your country, about the states in USA?’” Chingis says, adding that he's been somewhat stunned at the cloistered lack of basic civics knowledge common to some Americans. “I asked him how many states, he said, ‘I don’t know.'

It's difficult to deny the simple reality of it: Many people I know — not unlike this man Chingis met — don't know how many stars are on our flag or what they represent.

“It stupid, for me,” he says of Americans' shared geographic cluelessness. “I live in Kazakhstan, but, for instance, I know the capital of Malaysia.”

He pauses, grinning at me, his eyes seeming to glint playfully while he waits for me to supply the answer.

“Kuala Lumpur,” he says helpfully after my deep thinking seemed ready to give way to a slack-jawed blank stare.

“In America I've worked two months, and I see stupid and very smart guys,” he says. He's also met men and women whose understanding of the world is far more expansive and developed, he says: “The American people are very friendly, and if the American people were not so smart, then America would not be so powerful in the economic.”

Boy, did “Borat” do a number on Chingis and his countrymen. Of course, the overarching irony is that so many movie watchers never understood its ironic examination of America.

“I think the Borat makes the jokes on the American people — not Kazakhstan,” Chingis says.

“‘Borat’ — it's not true,” he says, passion creeping into his voice. “It's another country — maybe one on Mars. I hate this film. People say, ‘Where you from?’ and everybody says ƒ?~Oh, Borat!” People think it's no electric, no apartments.”

The real Kazakhstan is anything but backward.

Kazakhstan is — because of the Soviet-era mass deportation policies of Joseph Stalin — a blend of nationalities that includes Russians, Germans and ethnic Kazakhs. Chingis is from the last category, an Asiatic group descended from the Mongols — thus his name. It's no coincidence Chingis sounds like Ghengis.

By U.S. standards, the country's democracy is somewhat lacking; its president, Nursultan Nazarbayev, has held office since 1991. But the country is far from the movie's backwater depiction, and it was the first of the former Soviet states to pay off its international loans.

Though Chingis comes from a farming village of 10,000, he lives in a city, Oskemen, not much smaller than downtown Richmond. The city is a center for the country's civilian nuclear industry.

Chingis is rightly proud of his country and gives examples of how things are done differently in Kazakhstan.

“What I not like in USA — houses,” he says, speaking with all the intense experience of a summer painting the vinyl and pressboard shelters for which West End residents pay upward of $500,000.

“These houses is very close,” he says, pointing to my neighbor's house and the cookie-cutter line of them stretching down my block. “In my country the next house would be 20 to 25 meters” (about 22 to 27 yards).

He looks puzzled at all the flags he sees down the row of my neighbors' houses.

What Americans may lack in general knowledge we make up for in patriotism, an ideal that impresses Chingis to no end. To him, our national pride verges on the same fervor we saw as frightening nationalism in our Cold War enemy, the Soviet Union — the country Kazakhstan once was part of.

At first I thought he overstated his point about our prideful display of the flag — until, smiling, he points to the red, white and blue football I bought for my daughters on the Fourth of July.

It's difficult to explain to Chingis that our patriotism is not the same sort of state-mandated nationalism common to our past totalitarian foes. Our flag represents freedom and universal rights of all men.

It's late afternoon, and Chingis cleans paint from his brushes. He thinks a long time, puzzling over what he calls “the American man” and his “social mind” and how it's different from the “Asian man” and his own psyche.

“I like in America, its patriotism,” Chingis says. “I like it because everybody can and wants defend his country in any time.”

And even as he jokingly calls Iraq the country's 51st state, Chingis fears a world in which the United States doesn't insert its sometimes flawed agenda. Regardless of those flaws, Chingis says, “America is the ideal for each country. Everybody in my country, ideal in mind, it's America.” S