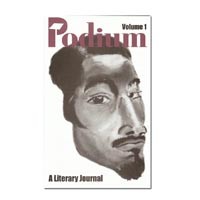 Yearbooks have maintained a pretty constant presence in the Richmond Public Schools, but the written word hasn't fared so well. It's been more than 50 years since a literary journal has been put together by Richmond pupils.

“I'm going to guess that these good teachers and good administrators that operate RPS have just had their hands full,” says author David Robbins. So Robbins, in partnership with the Visual Art Center and Virginia Commonwealth University, founded the Podium Foundation last fall to fill that vacuum.

The result: Students from Thomas Jefferson, George Wythe, John Marshall and Huguenot high schools were charged with writing, editing, illustrating, designing and judging the creative works of hundreds of their peers, and created Podium, the first literary journal from Richmond public schools in a half-century.

“What Podium wants to say is ƒ?~Look — you have the power of language, you can persuade people through your artwork and your poetry and your opinions.' Now 7,200 public school kids know that. That math right there is turning the tide against powerlessness and hopelessness,” Robbins says.

“It was very spirited and a lot of fun and very quickly the students took over, which was the whole idea,” says local novelist and VCU professor Tom DeHaven, the Podium writer in residence last year at Huguenot High School. “What was gratifying to me was how tough these kids were on their fellow students. They weren't pushovers. It was very spirited, these discussions.”

“We wondered why we only received a few fiction entries,” says the Podium Foundation's executive director, Lindy Bumgarner. “Then we realized — it's because fiction is not on the SOLs.”

“When I heard that I just was grinding my teeth,” DeHaven says. “I couldn't understand that, but when I found out, I thought, ‘Ah, of course.’ It's a great chagrin for a fiction writer.”

In April, with a deadline fast approaching but without funding or a printer, the community swooped in to help. Verizon donated the bulk of the printing cost and Worth Higgins, Virginia's largest commercial printer, adopted Podium as a charity, printing 10,000 books for pennies on the dollar. Distributech and Richmond Magazine helped deliver the journals around town free of charge.

The last of those 10,000 have disappeared from shelves, Robbins says, and now the foundation has turned its attentions to next year's issue. It's planning to expand the program to include all eight Richmond high schools and increase the print run to 15,000. So if you didn't get a copy this year, at least you won't have to wait another half-century.