The Richmond Public Library wants to increase digital literacy, but publishers are fighting. 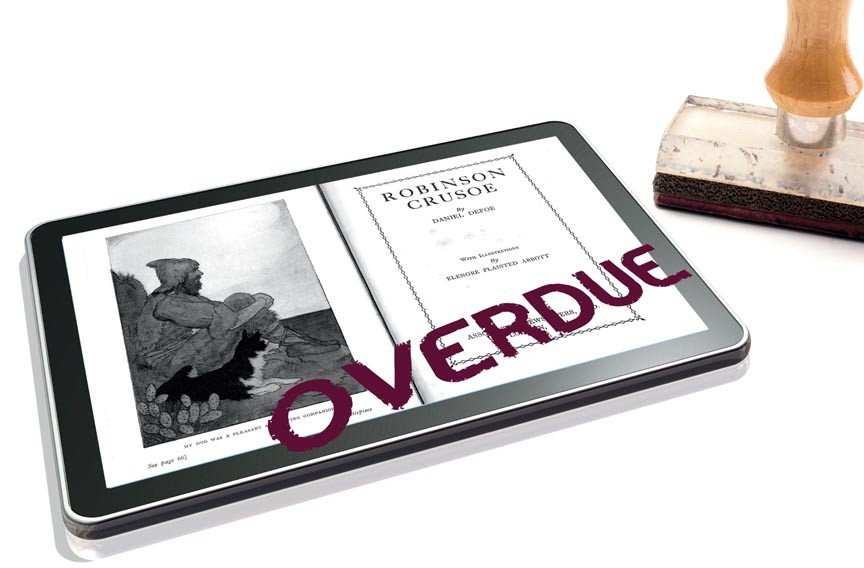 Imagine a world where you could borrow "50 Shades of Grey" without anyone seeing you, a world where any book could be at your fingertips for free, 24 hours a day, with no library fines. If this picture seems too good to be true, it is — for now. But despite some daunting obstacles, the Richmond Public Library is working to make the vision a reality through its growing e-book program.

In October 2011, the library began offering e-books to the public using OverDrive, a digital platform that provides resources to more than 20,000 public and school libraries worldwide, including the Chesterfield, Henrico and Pamunkey systems.

"We were a fairly late adopter of e-books," says the library's collection development manager, Melissa Schutt. Within the region, Chesterfield County pioneered e-book programs in 2009, followed by Henrico County in June 2011. With their head starts, both counties have quickly outstripped Richmond in amassing large collections: Chesterfield boasts more than 30,000 e-book and e-audio books, and Henrico offers more than 10,000 e-books and 8,000 e-audio files. That's compared with the Richmond Public Library's roughly 2,500 e-books and 600 e-audio books.

The disparity is because of differences in budgets, Schutt says. The Richmond library supports the program using a one-time allocation from the city matched by funds from the Richmond Public Library Foundation. The system's collections budget includes no ongoing funding for e-books. "Right now we have to make do with what we have, given budget cuts across the board," says Cristina Ramirez, library and community services manager.

The Richmond Public Library has plunged into its task enthusiastically, using social media to let readers know about the e-books available, lend pre-loaded Nooks that allow people to experience e-books before buying expensive products and instituting a weekly Tech Tuesday at the Main Library that allows patrons to drop in for hands-on help with the new technologies. "A lot of [what we do] is technology education for the public," Ramirez says.

And not just the public. Training staff to work with e-books is yet another challenge. So the library recently has started tech petting zoos that give employees the chance to navigate OverDrive and the dozen or so different e-readers and tablet devices that patrons use. But although these events are a step in the right direction, librarian Natasha Payne-Brunson observes that they mostly offer staff exposure, not the in-depth education that's necessary to keep the program growing.

Nevertheless, Schutt, Ramirez and Payne-Brunson see the expansion of the e-book program as a way to carry out the library's mission of promoting reading and providing the community with educational and cultural resources

"Not all our patrons can come down here," Ramirez notes. E-books allow the elderly, people without transportation, and people with limited mobility or visual impairments to take advantage of the library's offerings.

But while librarians see the increased access that e-books offer as one of their main advantages, publishers view it as a drawback — and their efforts to limit free public access to e-books have turned libraries across the nation into unlikely battlegrounds.

Until recently, only two of the largest six publishers — Random House and HarperCollins — would sell books to libraries. The other four either operated only small pilot programs or refused to sell their e-books to libraries, decisions condemned by the American Library Association, whose president, Maureen Sullivan, issued an open letter in September urging U.S. publishers to begin selling e-books to libraries to help vulnerable populations and accusing their actions of being discriminatory.

The Richmond Public Library has focused on acquiring popular adult fiction and nonfiction e-books. But even available e-books can be complicated to acquire. Because publishers are worried about the bottom line, they've experimented with different approaches. HarperCollins, for example, sells e-books to libraries at the same price as physical copies, but an e-book can be checked out only 26 times before the library must repurchase it.

In contrast, Random House places no restrictions on how many times an e-book can be checked out, but it charges libraries three times as much for an e-book as for a physical copy.

For Schutt, the 26-checkout model often is preferable, because demand is rarely consistent. At $60 to $70, it's a steep price for a library system on a budget, and 26 checkouts might be enough for a book that causes a buzz and then wanes in popularity. Although resources are limited, Schutt and Ramirez hope to see their collections expand to include job and educational training materials, such as general equivalency diploma and English-as-a-second-language workbooks. Hard-copy GED books in particular, they say, almost are never returned to the library after being checked out — they just disappear.

"If we had e-versions of the test books, that would help," Ramirez says.

Making such resources accessible in electronic form not only allows a larger group of people to benefit from the material itself but also increases digital literacy. "If we want to have a work force that's more tech-savvy ... this is a great way to do this," Ramirez says. "It helps bring up the whole community." S