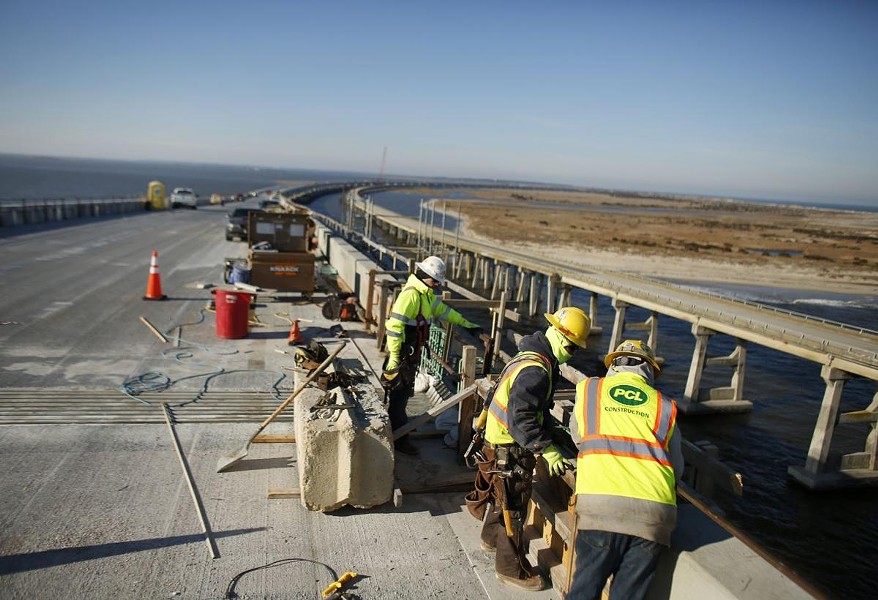 The $250 million, 2.8-mile-long span over the Oregon Inlet is built to last a century and replaces the old Bonner Bridge that withstood the harsh elements for 56 years, nearly three decades beyond its expected lifespan.

The new bridge’s first piling was sunk on May 9, 2016. Plans to replace Bonner Bridge began in 1989, but costs and lawsuits from environmental groups delayed construction.

Engineers ran the new design through more than 100,000 computer simulations of the 45 worst storms to strike the Outer Banks in the past 160 years. The models included the worst inlet currents, the biggest waves and highest water levels. One scenario even accounted for a barge slamming into its supports.

“We did everything we could to make it as robust as possible, but cost-effective as well,” said Pablo Hernandez, an engineer with the North Carolina Department of Transportation.

The highest portion will rise 90½ feet over the water, making it one of the tallest in the state. It will also tower 15 feet above the old structure. The bridge is supported by 694 concrete piles averaging 130 feet long.

The new bridge has fewer, more robust expansion joints spaced over five or six sections. Drivers will not hear and feel as many ka-thumps. The engineering also means less chance of corrosion, Hernandez said. Some of the larger ones are made with metal ribs that work like an accordion and can flex up to 30 inches.

Construction has not been without hiccups.

In late July 2017, crews from the PCL Civil Constructors in charge of building the bridge accidentally cut a power cable to Hatteras Island, shutting off electricity for a week. More than 50,000 visitors were evacuated. Class-action lawsuits were merged and the company settled last year for $10.35 million.

A machine will soon finish cutting traction grooves into the concrete deck. The corduroy-like surface ensures more stability for traffic. Crews are also pouring concrete for the final barriers on the sides of the bridge.

Workers are attaching the final metal rails on top of finished barriers. They provide support for cyclists and pedestrians when big trucks pass, Hernandez said. The bridge will have two 12-foot-wide lanes with 8-foot shoulders for cyclists, pedestrians and disabled vehicles. The old one has 2-foot shoulders.

The old Bonner Bridge will be demolished, and plans are to beef up the existing reefs off the Outer Banks with 80,000 tons of concrete from that span. A section at the south end will be converted into a fishing pier.

Electricians will be installing navigation lights for fleets of fishing boats and pleasure craft that pass under the new bridge daily. The high-rise portion will arch over the inlet for more than a half-mile, with 300-foot gaps between supports. Boats now pass through an opening 130 feet wide under the old bridge, battling currents and shallow waters to keep from striking the structure.

And Cape Hatteras Electric Cooperative will soon finish running cables under the bridge’s surface to provide power to Hatteras Island.

Dare County is asking the public for help. Since Jan. 11, more than 300 suggestions have come in, said spokeswoman Dorothy Hester.

The leading options are:

Herbert C. Bonner, after the Democratic U.S. Congressman from eastern North Carolina who died in office in 1965, two years after his namesake bridge was built.

Marc Basnight, the Democratic state senator who served as president pro tem of the body from 1993 to 2010, the longest ever in that post. Basnight, 71, resigned in 2011 from the General Assembly because of illness. He still lives in Manteo.

Officials are not certain who will be the first to cross the bridge or what kind of ceremony will mark the occasion, said Tim Hass, spokesman for the North Carolina Ferry Division.