The couple behind the new Richmond gift shop, Rest in Pieces, turns road kill into art. 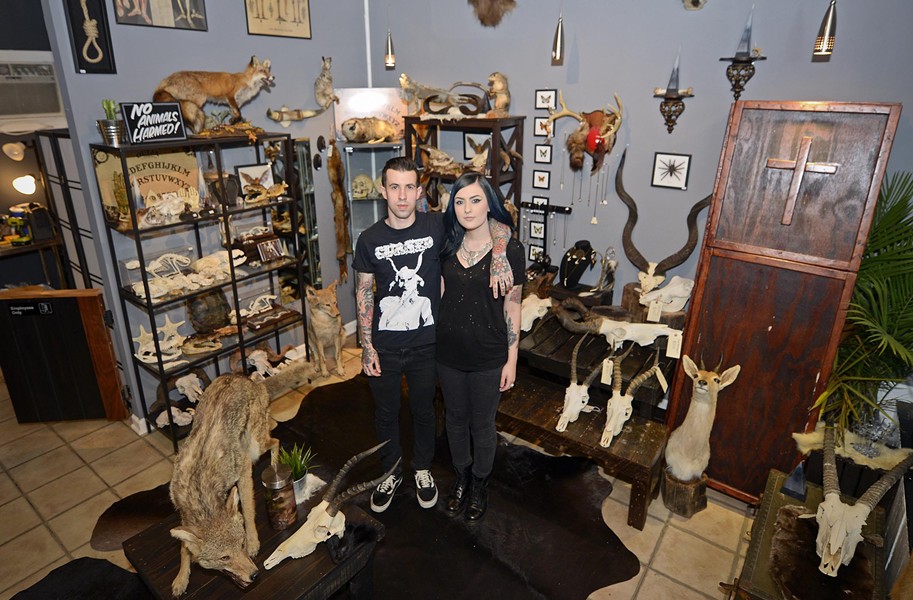 Step inside 1 S. Stafford Ave. and hundreds of eyes will watch you.

Every jar has a story: Most of the animals are donated by local farms, pet stores, nuisance wildlife companies — and the highway. Yes, these folks turn road kill into beautiful works of art, bringing creatures back to a more dignified existence. More exotic pieces such as lion and antelope skulls come from an ethical source that imports.

“We don’t kill anything,” says Justin Torone, who co-owns the store with his girlfriend, Alaina Gearhart. “We take things that people would normally just trash.”

Open less than a month, this exquisite oddities shop will change the way you look at dead stuff. When Style caught up with Torone, he seemed a little stressed. For the past few days, he’d been dealing with the Virginia Department of Game and Inland Fisheries, which told him he had to remove creatures native to Virginia from the shelves. Placid baby possums grin from behind the counter alongside a fierce coyote head, where they’ll remain until the whole thing is sorted out. Torone says he obtained all the right permits and was operating legally to the best of his knowledge.

“I don’t want it to get the point where I have to hire an attorney to help me, but if it gets there it gets there,” Torone says. “I put absolutely everything I have into this shop and I’m not letting anything happen to it.”

The pair’s passion for bottling critters began with giving each other skulls as gifts on occasion, eventually expanding to include wet specimens. Torone was convinced he could learn the art of what you might call rogue taxidermy. “We’d pick up stuff off the road. I’d hack it up,” he says. “It was awful, but you do it enough and you get used to it.”

The 24-year-old has had no formal training and simply experiments and learns from mistakes. Some lessons are tougher than others. The process for wet specimens, for example, involves injecting the animal with formalin, a diluted formaldehyde solution, and allowing it to disperse throughout the creature for a week or two. If it doesn’t do so properly, the specimen can take on too much water and bloat.

“At that point, it’s just ruined,” he says. “Happened to me one time. Never again.”

Torone also knows his way around street finds. “At this point, I know what not to pick up. Have you ever heard of exploding road kill? Don’t touch that.”

With newfound skills and a permit from the Department of Game and Inland Fisheries, the pair was in business. They crafted bone jewelry and sold it to a store for $100. “I was taking pictures of the money and everything,” he says. “That was a big moment.”

The late nights of scrubbing bones with a toothbrush and listening to Black Flag paid off. They launched an Etsy site, but ultimately bagged the idea when the craft-centric company got persnickety about images of their work and insisted that certain parts be blurred out and labeled “mature.” The couple opted to leverage Instagram and a personal site to start selling their goods.

Online sales were OK, but it was getting in front of folks at a local tattoo convention that heated things up. People began asking about a storefront, so Torone and Gearhart invited them to their home to check out the collection. “It was kind of weird, but we got a lot of sales through it,” he says. Word spread and they nearly cleared their entire inventory after a Hampton Roads tattoo convention. That chunk of money enabled them to open a brick and mortar operation.

Little could prepare the couple for the headaches that would ensue.

They had to and navigate pages of cryptic laws on selling animal parts and file the requisite paperwork while holding down 40-hour-a-week jobs. Then there was finding a suitable space and a landlord who had no issue with their wares.

The spot they found features giant front windows full of curious creatures, that seem to pique the interest of passersby and let in lots of light.

It’s all by design, Torone says. “People come in and think they’re going to walk into this dark space, blaring music, and I’m going to an old bearded guy wearing a trench coat,” he says. “It’s the opposite. We made it bright so you could see the specimens. The music is low. Yes, some things are a little creepy but it’s art above all else.” S