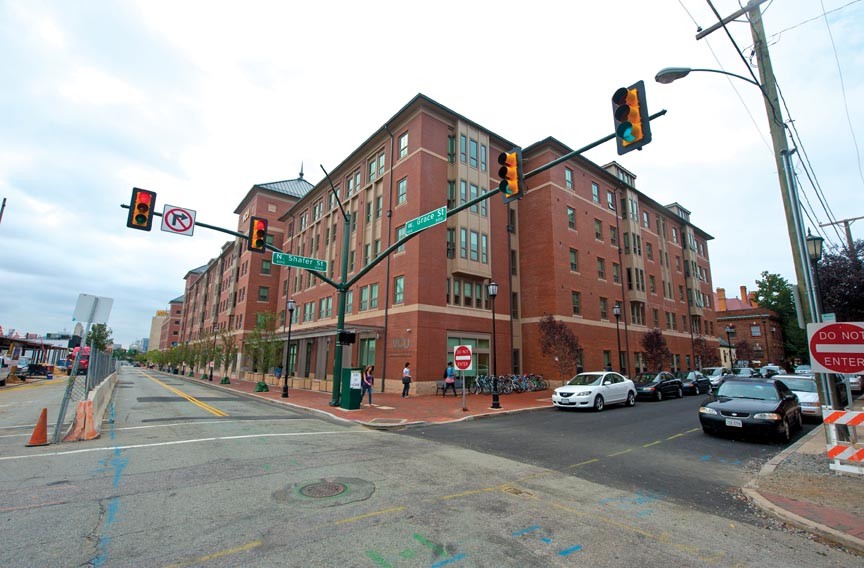 Students returning to Virginia Commonwealth University this semester found the north side of the 800 block of West Grace Street radically transformed from its appearance of a year ago.

Two structures — a sprawling, but handsomely detailed, five-story dormitory and an architecturally compatible 212-space parking deck with retail at street level — occupy most of the block. They replace a stretch of unpaved parking lots that, for at least a quarter-century, lent an unkempt look to this section of the Monroe Park campus.

Wedged between these new brick behemoths is the Sahara restaurant, which apparently declined to be swallowed up. This one-story eatery, with its dining patio and plate-glass windows, looks like it'd be more comfortable along a highway commercial strip than on a city sidewalk. Nevertheless, it's a reminder of the years from the 1960s to 1990s, when the block was enlivened with hip, student-oriented businesses and restaurants.

VCU alumni will recall an eclectic assemblage that included, at various times, Grant's Tomb (a head shop), the Exile clothing store, Urban Outfitters, and the Biograph cinema (where "My Dinner with Andre," filmed in the Jefferson, had its Richmond premiere in 1982). Restaurants included Chelf's Drugstore with its lunch booths; Andy's, always popular with the frat and sorority crowd; Grace Place, a beloved vegetarian restaurant; and Lum's, a chain standby that served up burgers and fries.

Looming to the east was Richmond Metropolitan Hospital, whose brutalist presence was accentuated by a bold, X-shaped floor plan. The design was necessitated when the late Jay Lundy, a feisty local actor and hairstylist, refused to sell his late-19th-century carriage house for the hospital's expansion. The architect essentially configured the new building around it. Some years ago VCU converted the hospital to the Honors College dorm.

The former Metropolitan Hospital structure is an intriguing link to a forgotten time in the early 1900s, when this stretch of West Grace Street was a densely populated medical center. Grace Hospital was situated at the corner of West Grace and Henry streets (it is now apartments). St. Elizabeth's stood in the 700 block. And St. Luke's was located at the northwest corner of Grace and Harrison (now a university parking lot). The 800 block of West Grace was lined with handsome townhouses built for Richmond's gentry in the late 19th century, when this and nearby blocks comprised one of the city's fashionable residential neighborhoods.

By the 1930s, the grand old houses that weren't serving as doctors' offices had become boarding houses or apartments where scores of single nurses lived. Richmond Metropolitan was established when Grace and St. Elizabeth's hospitals merged in the 1970s. Only Sally Bell's Kitchen remains from the old days (although it operates neither under its original name, Sarah Lee, nor at its first location).

The new West Grace South complex and Laurel Street deck make a bold statement, heralding a new era for these blocks of Grace Street. The last old buildings have been replaced by structures that are institutional in scale as VCU establishes an intensively populated student community here.

Two firms, WDG of Washington and NBJ Architecture of Richmond, were architects for the project. Whiting Turner was the contractor and Higgins & Gerstenmaier served as landscape architect.

The five-story dormitory anchors the western end of the 800 block and houses 459 students. Residents enter the building's lobby at midblock after passing under a semi-open-roofed loggia that adds human scale to the building.

Two large, beautifully landscaped courtyards on the dorm's south side cut into the building and create opportunities for daylight to penetrate. All of the well-decorated quad units are equipped with sitting rooms, dining areas and fully equipped kitchens. Thirteen common lounges and 23 study rooms should encourage and stimulate interaction.

If the dormitory feels thoroughly comfortable on the inside, similarly its exterior blends effortlessly with the neighborhood. It may be the biggest building along Grace Street, but the sensitivity of its overall massing, choices of building materials and elegance of the detailing — down to the brick and mortar color, window sill design and paving choices for the rear alley — make this unquestionably the most architecturally successful building since VCU undertook its ongoing, transformative building boom. S