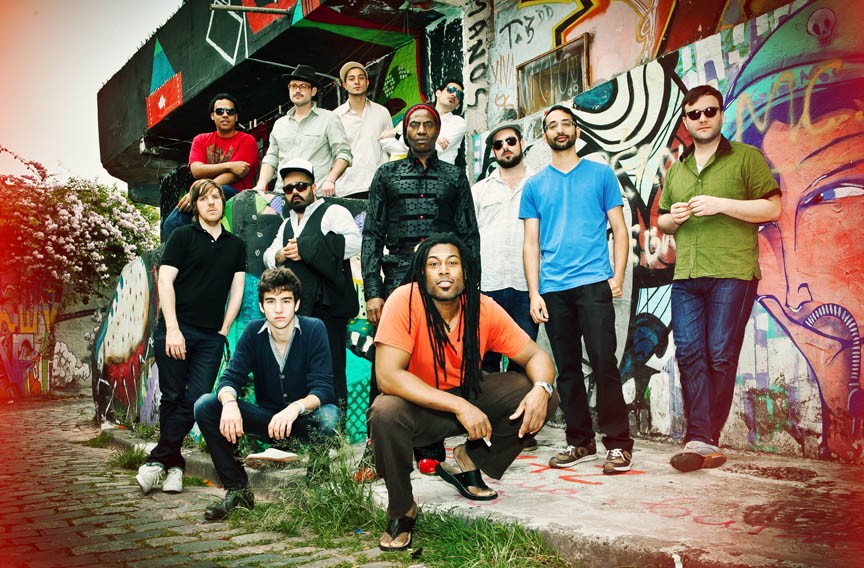 The Antibalas ensemble is on a mission.

“What we’re doing is part of a musical conversation that has been ongoing between the African continent and the African diaspora for 500 years,” says Martin Perna, who founded Antibalas and plays baritone saxophone.

“In the same way that West African rhythms and musical principles were transported to the Caribbean and the U.S. via slavery,” he says, “and then passed back to Africa in new forms like jazz, rumba and funk in the 1950s through the ’70s, this is yet another conversation, happening in the 21st century, informed by everything that has happened before it plus the advent of technology.”

Born in a Brooklyn warehouse in 1998 a year after the death of seminal musician and Afrobeat pioneer Fela Kuti, the multiethnic crew Antibalas -- pronounced ahn-tee-BAHL-ahs, meaning bulletproof in Spanish -- is credited with helping keep Kuti’s legacy alive by introducing Afrobeat to a wider global audience. Part of that stems from members of the group performing in the pit band during the Tony-winning and Grammy-nominated production of “Fela,” an homage to the Nigerian bandleader who forged the Afrobeat sound in the 1970s out of indigenous rhythms and American soul and jazz.

“Fela” brought Afrobeat to a boiling point in the cultural zeitgeist. But even after a successful run on Broadway and nearly two decades of the band’s around-the-world performances, Perna still finds that he has to explain Antibalas’ music, especially at home.

“More people are familiar with [Afrobeat], but I don't think that many more people really understand what is going on musically,” Perna says. “Afrobeat is much more multilayered and esoteric than anything that you hear on Top-40 radio, so people are less prepared to dig in. That’s why groups who can borrow little bits of flavor and graft them onto more popular, recognized forms of music like rock have been a lot more commercially successful.”

Indeed, bands such as Toubab Krewe and Vampire Weekend have dipped into Afrobeat’s kineticism and hypnotic groove to critical acclaim, fervent fan bases and, in a few cases, million-selling hits. While Perna doesn’t slight any band for incorporating Afrobeat elements into a rock ’n’ roll context, he says it doesn’t do much for the genuine article.

“Musically, it’s always good to see musicians looking beyond their borders or cultural experiences for musical inspiration and growth,” Perna says. “However, it’s not something that has made a positive impact for us. I don’t think mainstream bands incorporating these sounds really has drawn out or directed masses of people to the more raw, undiluted stuff that we do. Putting chipotle sauce on a hamburger doesn’t make it a taco, nor does it prepare you to like or appreciate Mexican food per se. … I don’t begrudge anyone doing fusions at all, when it’s done in a way that is musically interesting and shows a respect or acknowledgement of its roots.”

In that way, Antibalas stands starkly in contrast with musicians trying to graft worldly sounds onto rock music. The music jams on fat grooves, but Antibalas isn’t a jam band. It doesn’t acknowledge the lines between jazz, soul and Afrobeat -- it erases them. Its songs, like those of Kuti’s Africa 70 ensemble, are careening sprints that zigzag between taut urgency and orgiastic celebration, horn vamps and bubbling bass lines and scratchy guitar licks and call-and-response vocal shouts building into cacophonous struts.

After all, Antibalas’ prevailing mission isn’t to fuse Afrobeat with anything. It’s to play it as unadulterated as possible.

“It’s a tropical music,” Perna says. “The instruments sound better in certain temperatures than others. The air, which is the medium for the music, holds the sound differently when it’s cold, hot, dry, humid. When people are warmed up, anything is possible. If they come to the show cold, we’ll spend most of our effort trying to thaw them out. … Our goal is to bring everything to a boil.”

Zap Mama and Antibalas perform at the Modlin Center for the Arts on Wednesday, Jan. 28, at 7:30 p.m. modlin.richmond.edu.