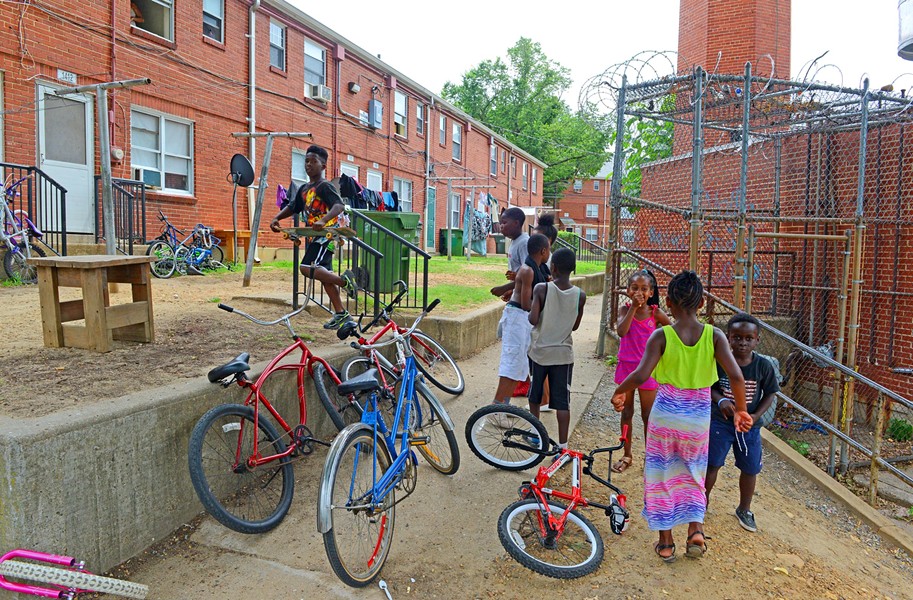 Scott Elmquist The pool in Gilpin Court has languished in disrepair for three years. A group of children playing in the area Friday say they swim at Battery Park.

On a steamy afternoon last week, a dozen or so children are playing in a dirty brown lot between apartments at Gilpin Court, Richmond’s oldest public housing project.

It seems like the perfect day to splash into a swimming pool. But the one in their backyard, at Gilpin’s Calhoun Community Center, has been closed for three years — and there are no plans to repair it.

The 43-year-old indoor pool, at 436 Calhoun St., could be back in service for an estimated $2.6 million. Instead it sits empty and neglected, a metaphor for the frustrating problems faced by Gilpin Court’s nearly 2,200 residents.

“They said there was some kind of infection so they drained it,” says Chanita Sanders, the mother of a child who’s lived at Gilpin for 12 years.

When a pack of kids is asked where they can swim, they shout back answers. “We got Pocahontas State Park,” says a young girl sporting a pink and green playsuit.

The child may not realize that the park is 27 miles away, in Chesterfield County. The closest public city pool is 2.8 miles. Both involve car drives.

The dilemma raises questions about how the Richmond Redevelopment and Housing Authority operates Gilpin Court and 10 other public housing projects.

The authority has gone nearly six months without a chief executive. The previous one, Adrienne E. Goolsby, resigned under a cloud in January. She was replaced by T.K. Somanath, chief executive of the Better Housing Coalition, who’s acting on an interim basis.

Somanath scheduled an interview with Style on June 22, but canceled the day of, citing an emergency. Authority spokeswoman Valena Dixon says in a statement that “the pool is closed due to rising costs for maintenance and repairs and diminishing funds which we have available.”

“Under Mr. Somanath’s leadership,” she adds, “we are working aggressively to identify partner agencies so that we may reopen the pool.”

In her nearly three years running the authority, Goolsby shook up top staff and fired the authority’s police chief and its officers. During her tenure, the authority was the target of probes by the U.S. Department of Housing and Urban Development and queries from the U.S. Senate Judiciary Committee.

Last June 24, Sen. Charles Grassley, R-Iowa, wrote a scathing letter to Goolsby asking about alleged financial irregularities and mismanagement. Among them was an accusation that that RRHA’s general counsel, Michelle Waller, was unlicensed to practice law. Dixon says Waller no longer is employed by the authority.

Other questions involved why the RRHA’s former police chief, Hal Hazelton, used authority funds to buy a $900 television and pay for cable and satellite entertainment for an “emergency center” that didn’t exist. Hazleton and his wife also traveled to a San Diego conference on authority expense, according to the letter, followed by a side trip to Las Vegas.

The authority also paid $1,515 in 2012 to charter a bus taking 55 residents of Creighton Court on a gambling trip to Hollywood Casino in West Virginia, Grassley wrote.

The senator also questioned why Goolsby was being paid $183,800 a year plus a $10,000 bonus despite a Department of Housing and Urban Development directive setting a pay cap of $155,500 a year.

In the months before she resigned, Goolsby fired Hazleton and Stephenie Horton, the authority’s chief operating officer. Her resignation was accepted “by mutual agreement,” according to the mayor’s office.

A spokeswoman for Sen. Grassley’s office said the authority did not respond to his letter: “Last November, we heard that the letter had been sent to the authority’s lawyer’s office, but we never heard back.”

One problem was whether the authority is a state or local entity that doesn’t answer to the federal government or Congress. The Senate Judiciary Committee apparently has no subpoena power in the matter.

Asked if Grassley’s letter may have been a reason for Goolsby’s resignation, the spokeswoman said, “We’d like to think so.”

Gilpin Court’s long-term future may be uncertain. In 2008, the city proposed razing it for a mixed use project, but nothing came of the idea.

In the short term, there will be little relief from the scorching summer. In a Back Page essay published in Style, Mike Sarahan wrote about the phenomenon of an urban-heat island, where concrete, asphalt and buildings only increase temperatures.

“We’d sure like to go swimming and there’s supposed to be a pool,” says one of them, a young girl named Azirah. S