Though slightly shabby, a still satisfying “Rent” heats up the Firehouse stage. 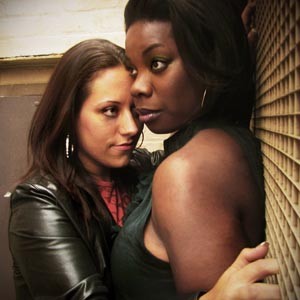 Much of the power of Jonathan Larson's “Rent” comes from the show's compelling contrasts. The vibrant energy of youth collides with the stark finality of death. Idealism does battle with capitalism. It's an intimate story of a few couples that manages to encapsulate the sprawl of an entire subculture — the bohemian underbelly of 1990s-era Manhattan (Larson based his musical on the Puccini opera, “La Boheme”).

Balancing these contrasting elements is a significant challenge, one that director Jase Smith doesn't quite manage in the staging of the Pulitzer Prize-winning musical at the Firehouse Theatre. The first act struggles to come into focus, hampered in part by technical elements and perhaps by squeezing the show onto a smallish stage. However, the second act coalesces into a stirring affirmation of life and love. In the final analysis, the production is certain to enthrall audiences thanks to a number of knockout performances and the consistent brilliance of Larson's score.

“Rent” begins in the shabby warehouse apartment of Mark (Nick Aliff), a budding filmmaker, and Roger (Terence Sullivan), a despondent musician coping with the recent suicide of his AIDS-infected girlfriend. Much of the story concerns their apartment, their inability to pay the rent, and the mass protest that erupts around the dispute with their landlord, Benny (Josh Marin). But the heart of the show is the sweet and quirky relationship between cyber-trickster Tom Collins (Durron Tyre) and Angel (Antonio Tillman), a transvestite whose sunny disposition belies his struggle with AIDS. The influence of their affection is felt by Roger as he attempts to connect with the young junkie, Mimi (Nadia Harika), and by Mark's ex-girlfriend Maureen (Jacquelynn Camden), who's embroiled in a volatile love-hate battle with JoAnn (Joy Newsome).

As these plotlines emerge, the production has trouble establishing a clear sense of place. While David MacLain's ramshackle set is charming enough, it's sometimes difficult to figure out where the action's supposed to be happening. Characters come and go from somewhat random locations and the occasional dramatic variations in the lighting (also designed by MacLain) provide more confusion than enlightenment.

Still, musical director Leilani Mork does a fine job corralling the exceptional voices she has at her disposal, though feedback and fuzziness marred some of the performances on opening night. The show is distinguished by several delightful duets: Sullivan and Harika discovering each other in “Light My Candle” and Camden and Newsome quarrelling through “Take Me or Leave Me,” just to name two. The ensemble numbers are definite crowd pleasers — a frisky “La Vie Boheme” and heart-rending “Seasons of Love” — but Tyre's searing second-act reprise of “I'll Cover You” will be what echoes in my memory weeks from now.

Though not always cohesive, this “Rent” is a collection of often-dazzling moments, a vigorous celebration of “La Vie Boheme.”