The last remnants of summer concert series the Big Gig reaches deep into the past for its musical material. 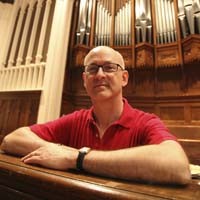 Centenary Classics, the annual showcase of baroque choral music returning to downtown Richmond this weekend, is an unlikely affair on several scores. Chiefly, that's because of its timing — late June, when people are more attuned to spare ribs and swimming holes than cantatas and motets. But it's also because of an orchestra's use of 17th- and 18th-century period instruments and its emphasis on little-known composers.

When Centenary United Methodist Church launched the festival in 1988, it was part of the Richmond International Festival of Music, later known as the Big Gig. Now that festival's a distant memory, as are several other local ventures in summertime classics. But Centenary Classics endures.

“In the early years we built our programs around big-name composers — Bach, Handel, Vivaldi,” says Stanley M. Baker, who took over as the church's organist, choirmaster and director of the festival in 1991. “But as the music world has rediscovered composers of the early and middle periods of the baroque, active in the 1600s, we've gone more in that direction.”

Along the way, the festival has presented a string of U.S. premieres and modern premieres of works that had gone unheard for centuries.

This year's featured composer is Franz Biber, a Bohemian (today he would be Czech) and exact contemporary of the great Italian violin maker Antonio Stradivari. Biber was one of the early virtuosos of the violin, but he spent most of his career in Salzburg, the Austrian hill town ruled by an archbishop who was less interested in fiddle fantasias than in a steady stream of new music for the local cathedral. Two generations later, a similar clash of priorities led Wolfgang Amadeus Mozart to flee Salzburg for Vienna.

Sunday's Centenary program presents three of Biber's psalm settings and his “Missa Sancti Henrici” of 1697. Alongside that music, Baker has programmed vocal and instrumental pieces by three of Biber's contemporaries, the German Johann Kuhnau, the Austrian Johann Heinrich Schmelzer and the Bohemian Pavel Josef VejvanovskA«.

This is not stuff you can pick up at Sheet Music ”R” Us. “I couldn't do this music without the computer,” Baker says. He connects with scholars and other early music specialists through the Internet. This year, his prime sources were in Australia and Florida. They send him facsimiles of 300-year-old manuscripts, which he copies using music-notation software.

“Getting this music ready to perform means spending my evenings at the [computer] keyboard for months before the festival,” says Baker, who by day is an IT specialist with the Virginia Employment Commission. While he explores “all this music waiting to be rediscovered,” he says, “I also have to match it to the abilities of our singers and make sure the music doesn't require a bigger orchestra than we can afford.” S