Alton Lane takes a high-tech approach to designing the right fit for men. 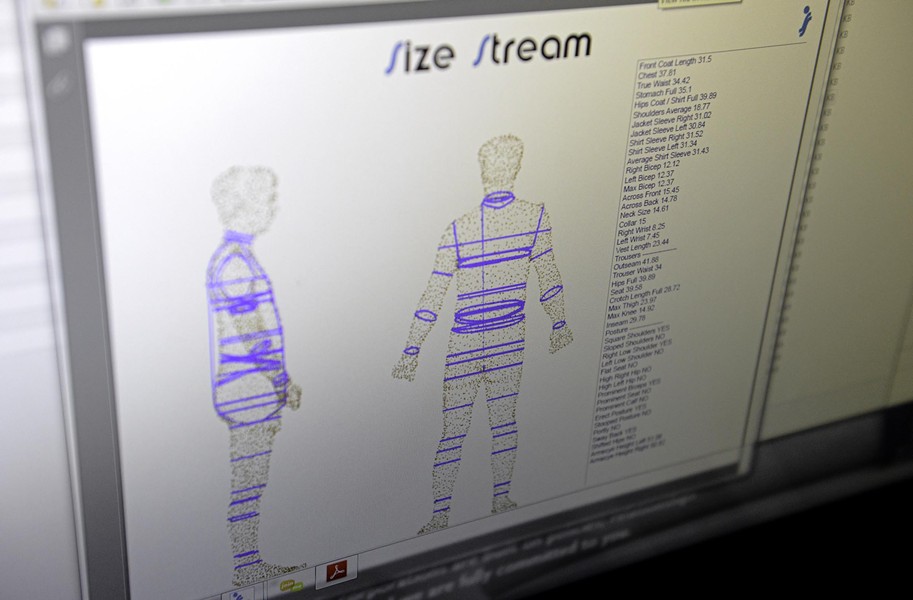 Animal skins dot the floor. With a long, dark mane, the hide of a wild boar is particularly prominent. A bear is mounted on the wall. A bookshelf is devoted to bourbon. Another one opens to reveal a back room used by the staff for poker games and customer consultations.

And yes, there are suits, jackets and shirts — though not as many as you’d think. That’s because everything the company sells is custom-designed, it says, to perfectly fit each customer’s body.

To that end, tucked away in a corner next to a leather couch and flat-screen TV, is a booth loaded with optical sensors that take hundreds of measurements in 30 seconds. In a curtained-off, private area, customers strip to their underwear and socks, straddle two foot marks on the floor and stand still.

A computer on an antique school desk just outside the booth uses the captured measurements to generate a three-dimensional profile of the customer. It’s less invasive than an airport body scanner, because, as manager Richard Newcomb helpfully notes, it can’t see through the aforementioned underwear. But it’s still fairly detailed.

The payoff is in the fit. Those high-tech measurements are triangulated with old-fashioned, hands-on measuring tape and, finally, sample garments.

From there, the conversation turns to fabric, cut and style. Are you looking for a slim fit? Heavy tweed or light cotton? Peak lapels or notch? Customer preference rules, Newcomb says, with the buyer brought in on every relevant decision.

Alton Lane, which opened its Richmond showroom last year at 304 Libbie Ave., offers private consultations with customers booked in advance. Newcomb says those sessions also are an opportunity to educate customers about options available. Find out what, exactly, a box pleat is, perhaps over a glass of bourbon.

Four to six weeks later, the clothes come in. Suits start at $600, he says, compared with a custom tailor who might charge “many thousands” of dollars.