BoDeans at the Hat Factory 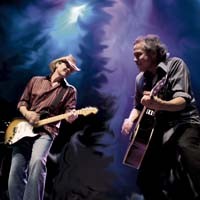 Formed in Waukesha, Wis., by singers, songwriters and guitarists Sammy Llanas and Kurt Neuman, the BoDeans first garnered national attention in 1986 with their debut album, “Love & Hope & Sex & Dreams.” With a heart-on-their-sleeve, push-and-pull dynamic between Neumann's electric leads and Llanas's acoustic rhythms, the longtime friends would go on to be named Best New Band in Rolling Stone magazine the following year. Though the follow-up effort, “Outside Looking In,” would break into the Top 100 and enable the pair to tour with U2, it wouldn't be until 1996 that the roots ensemble would land its biggest hit with “Closer to Free.” Despite being recorded two and a half years prior as the lead-off track for their album “Go Slow Down,” the song found new life when it was made into the theme of the popular TV series “Party of Five.” Appropriately fitting for things coming full circle, supporting the collector's edition release of their debut, the BoDeans are scheduled to perform the first show at the newly established Hat Factory — formerly Toad's Place — on Friday, Sept. 11, at 9 p.m. $20-$25. 648-8623. — Mike Hilleary