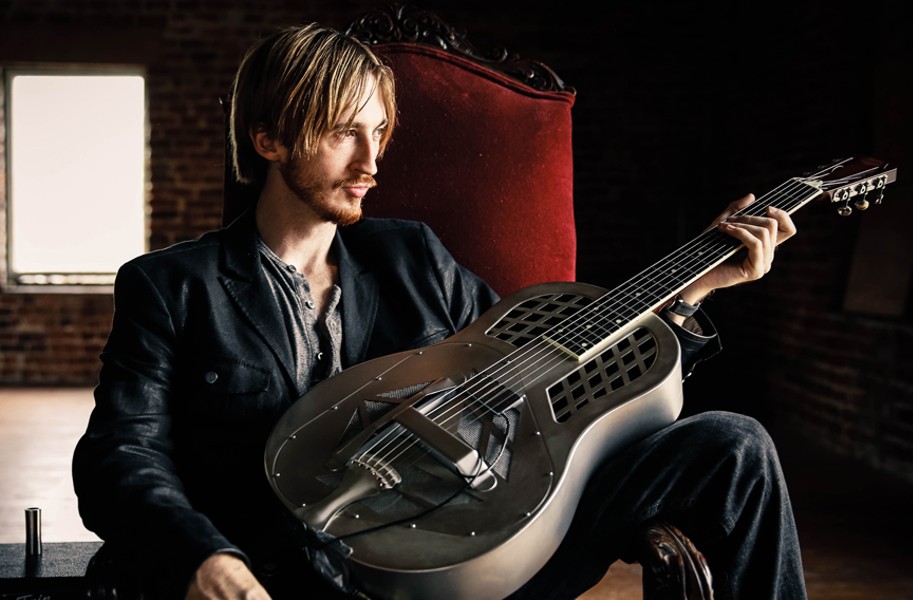 Kaya Lee Berne Eli Cook has shared the stage with the likes of the late B.B. King, Taj Mahal and Robert Cray.

Eli Cook knows the myths about the crossroads and making deals with the devil. He knows about tent revivals and playing the old songs. And as a young man he learned to fuse the spooky brew of Muddy Waters and John Lee Hooker, meld it with Hendrix and grunge, and forge his own take on the blues. His power-trio pyrotechnics and judgment-day, vocal testifying are bone-chilling. And he’s only 30.

Cook, who regularly plays Richmond, lives on the outskirts of Charlottesville, not far from where he started as a lanky kid raised in Nelson County. In the last few years Cook has morphed into a regional artist, sharing the stage with household names in rock and blues. I first saw him two years ago in Washington, where he opened for blues icon John Mayall.

I was there to review the octogenarian Mayall, the godfather of the ’60s British blues revival. Cook was up first that night. It isn’t unusual for opening acts to have to play through loud chatter and distraction while the ticketholders wait for the headliner. But when Cook ran the slide up the neck of his resonator and dropped his foot onto his makeshift stomp box, the room fell silent. In a matter of seconds the audience was pulled into Cook’s world.

The roar of his tombstone vocals and the boom of his stomp box were eclipsed by the fluid fretwork he served up. His slide work on the resonator was a thing of beauty. And his voice sounded like it belonged more to an 80-year-old black man than a skinny white kid from farm country.

His string-bending brilliance has garnered the attention of fellow musicians. Cook respects the old songs, while not patronizing them with slavish imitation. In 2014 he released his fifth album, “Primitive Son,” a power trio affair that featured guest appearances by Tinsley Ellis, Pat Travers, Leslie West and Sonny Landreth, amongst others.

At the Broadberry in 2015, Georgia blues guitar ace Ellis said: “That kid is really talented. He should be better known.”

And Cook’s profile seems to be rising. He’s opened for some A-list artists, including several dates for the late B.B. King, Taj Mahal, Tab Benoit and Robert Cray. In the fall of 2015, Blues Matters magazine named him one of the top three solo blues performers worldwide. In August, he played the Bluesfest in London, Ontario. And he appears regularly at B.B. King’s club in New York.
Nursing his coffee in the corner of Starbucks, he says he’s almost ready to release his next album: “It’s a solo acoustic record. The working title is ‘High Dollar Gospel.’”

For all his technical prowess and jarring graveyard howl, he comes off quiet and almost shy. He speaks tentatively, as if he was at a deposition. “The main thing is to try to stay inspired,” he says.

“This new record is influenced by bluegrass, old-time mountain music and gospel, more so than any album I have done,” he says. “When you blend all that together you can come up with something fairly unique that doesn’t sound dated.”

“The key is the songwriting. It can be inspired by a guitar lick, or a phrase,” he says. “Sometimes I get a phrase. ‘High Dollar Gospel’ was a line that just stuck with me. It got me thinking about leading someone astray, whether it was in politics or religion.”

Cook is aiming to create a collection of songs that flow, even as they incorporate different sounds or arrangements. His inspiration for that comes from the records he loved growing up. “Any of those old Stones records,” he says, “especially ‘Exile on Main Street.’” S