Blowing the Dust Off

Our theater critics discuss the contradictions of 2013 and look toward the rest of the season.

Sometimes it's difficult to make sense of the local theater scene. The end of 2013 saw an odd focus on the early 20th century, with a half-dozen shows evoking the 1920s and '30s. Although the focus was turned backward, the productions themselves were surprisingly forward-looking and ambitious. The merging Henley Street and Richmond Shakespeare reworked "Taming of the Shrew" into a dizzying film and theater pastiche set in the 1930s, while the renovated Swift Creek Mill Theatre employed a huge (and hugely talented) cast to stage "The Drowsy Chaperone," a musical drenched in 1920s-era nostalgia. Let's talk:

Timberline: So Rich, between shows like Virginia Rep's "Fiddler on the Roof" and the multi-company collaboration "The Importance of Being Earnest," it's hard for me to remember a recent show set in the present day. You think this is a reflection of Richmond's history obsession?

Griset: It's true, it feels like the theaters have been period-obsessed. Perhaps in the wake of so much change in the theater community we all just want to cling onto something familiar. With all of these closings, mergers, renovations and shakeups, it seems like Richmond Triangle Players are the only local major theater company that hasn't undergone some sort of drastic change in the past year and a half. Now that it appears the dust is settling, where does the theater community stand compared to a year ago?

Timberline: Well, I hope you didn't just jinx the Richmond Triangler Players! From what I can see, the local theater scene has emerged with a new vitality. The echoes of discord after Carol Piersol's firing from the Firehouse have faded significantly since the Almost 20 Years celebration her supporters held in October. Piersol has gone on to produce three exceptional shows on her own and, with the resignation of former Firehouse managing director Gini Mallory in August, that drama lost one of its principal players. Swift Creek Mill has returned from a temporary renovation shutdown with incredible energy and the Henley and Richmond Shakespeare merger shows great promise.

Speaking of Henley, I thought director Jan Powell did something truly surprising with "Shrew." Was there anything you saw on stage this past year that really surprised you?

Griset: Aside from the fact that despite months of renovations you still can't hear anything at the Landmark Theatre? I think I understood two whole sentences from "War Horse."
Seriously though, Henley's "Julius Caesar" gave me chills. That's not to say Henley doesn't regularly stage excellent theater — or that setting "Caesar" in early-20th-century Europe hasn't been done before. But it's rare to see a production with such a rich and well-executed imagining, and director James Ricks had me captivated from start to finish.

So, say someone — maybe legendary critic Frank Rich — comes to town, and you want to show him one show from the past year that personifies the Richmond theater scene, what would you pick? 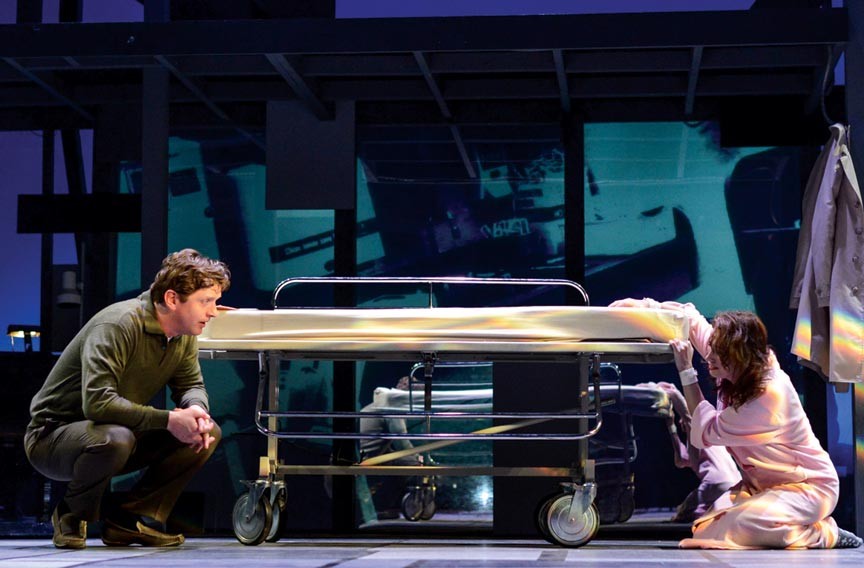 Timberline: That's a tall order. If forced to pick just one, it would be Cadence Theatre's excellent staging of "Next to Normal." Cadence's ongoing collaboration with Virginia Rep, local theater's big kahuna, reflects the surprising cooperative spirit among companies here. And the production hit a lot of typical Richmond chords: a splashy musical that's contemporary but not too edgy, solid technical elements and a cast that mixes top-notch local talent with heavy hitters brought in from New York.

Was any show or performance a particular disappointment for you, and what are your thoughts on the rest of the theater season?

Griset: I wasn't a fan of Firehouse's "Pop! (Who Shot Andy Warhol)." While the cast did an admirable job, the book was a mess and the direction didn't seem to be driving at anything in particular. You had poignant moments sandwiched between farcical scenes, the abandoned framework of a whodunit and production elements which made little sense. That said, I thought Virginia Rep's "A Lug Nuts Christmas" was one of the laziest shows I've seen on a Richmond stage. At least "Pop!" attempted to entertain its audience.

As we set out into this new theater landscape, I think there are still some surprises in store. We're waiting for Henley and Richmond Shakespeare to announce a new name for the merged company. The Richmond Triangle Players are ambitiously staging seven main-stage productions when a four-show season is considered standard. And after the duds of "Pop!" and "Any Given Monday," the Firehouse seems to be getting back on its feet. Carol Piersol continues to produce provocative work in whatever space she can find. The season's only halfway over, and there's a lot to look forward to. S

Our critics' most anticipated shows of 2014.

Virginia Rep's "Tartuffe," opening Feb. 13. A classic comedy about hypocrisy. The company is sure to cast some excellent lead actors.

Firehouse's "The Elaborate Entrance of Chad Deity," opening Feb. 6. A dynamic, wholly original play about professional wrestling that promises to be a wild ride.

Richmond Triangle Players' "Cabaret," opening June 4. A great setting for this subversive classic about the decadence of 1930s-era Berlin.

Henley Street and Richmond Shakespeare's "Death and the Maiden," opening Feb. 6. An intense, personal drama in which a woman confronts her torturer.