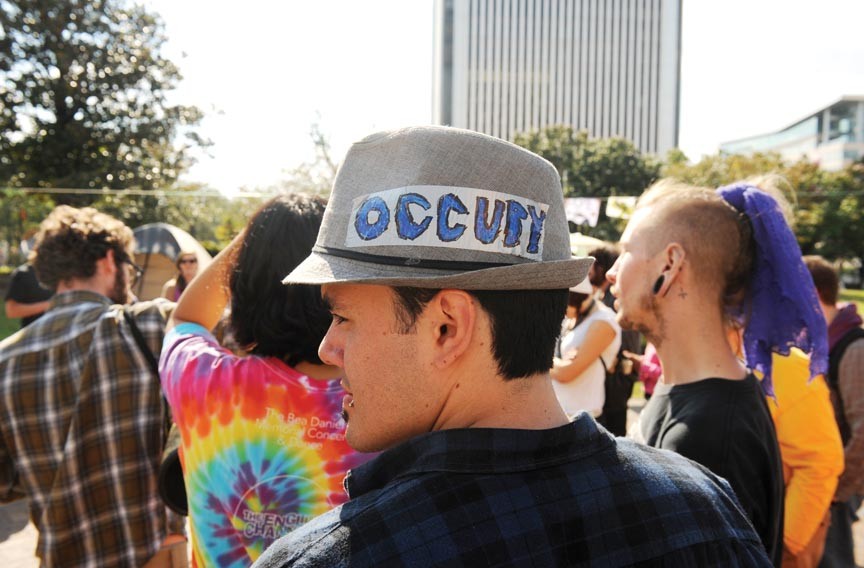 A few dozen protestors make the 1-mile trek from their tent city in Kanawha Plaza uphill to City Hall. They crowd into the front row of City Council chambers, ready to hear the fate of a resolution sponsored by Councilman E. Martin Jewell. Will his effort pass, allowing their encampment to stay, unencumbered by legalities? Or will they continue a delicate dance with police and elected officials?

Mayor Dwight Jones so far has been watching without stepping in, and council members aren't sure what to do. In the end, they say they need more time to contemplate the consequences, and take no action on Jewell's resolution to support the protest.

During the vote, the protestors turn their hands downward, silently wiggling their fingers back and forth in a show of disapproval.

Afterward, a gangly man with a graying shock of beard hops into an elevator along with a group of other, younger occupiers. In a movement that proudly rejects the notion of having leaders, Farid Alan Schintzius, 63, likens himself to a mentor.

"We didn't win anything," one protestor complains. Schintzius, the de facto spokesman for a group that has yet to choose one, addresses the situation quickly.

"This is Richmond," he intones. "Keeping them from coming in and cracking heads, keeping the conversation civil — is winning."

For Occupy Richmond, perhaps the most important thing is time. It's at the center of every decision, discussion and question about the protest that descended on Kanawha Plaza in the heart of the city's financial district.

When would protestors be satisfied that their message made a difference? And how long would they stay in tents, sleeping alongside homeless people in downtown Richmond? Protestors acknowledged the uncertainty even as they made plans to bear down for the inevitable cold weather.

They racked up 15 nights in the plaza. Police made several visits, informing protestors that the encampment was illegal unless they obtained proper permits. Three days after that City Council vote, Mayor Jones visited the encampment last week. He invited representatives from the group to meet with him, explaining that the city's tolerance for the protest was waning.

Early on Monday, around 1 a.m., their time ran out.

Dozens of uniformed and mounted police officers arrived, protestors say, forming lines on the sidewalk and streets surrounding the plaza. Campers inside the park were told they had an hour to collect their belongings and leave before the encampment was bulldozed.

Will Carino, a member of the group's media team, says that as the occupiers and homeless filed out of the park, police and city workers began placing tents, supplies and whatever the protestors couldn't recover into garbage bins. 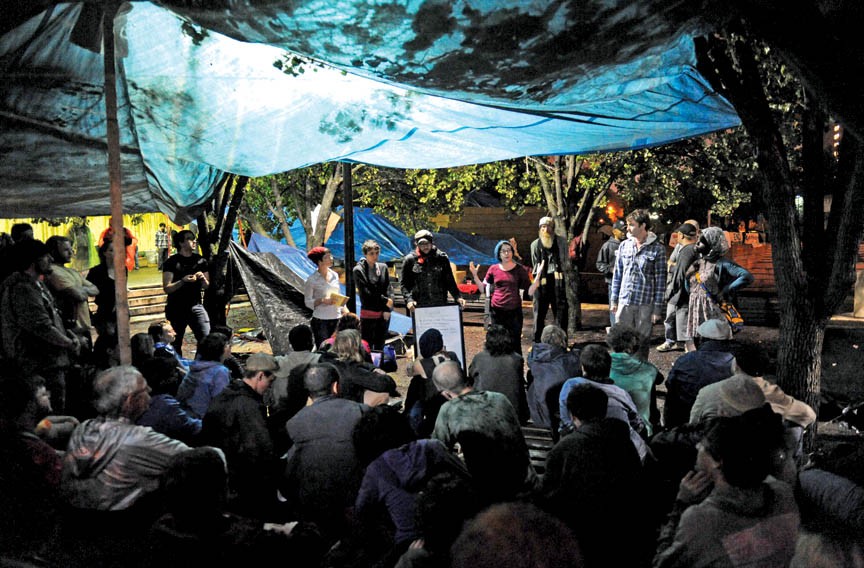 At least 9 protestors, including Schintzius, were arrested for violating the ordinance that prevents camping in the city's parks, Style Weekly confirmed Monday. After refusing to leave the park and provide their information to police they were taken to Richmond City Jail, Carino says.

Hours later, the only evidence of the Occupy Richmond that remained were leftover tarps and nylon tents bulldozed into piles at the park's west end. But protestors were getting reorganized at sunrise.

Occupy Richmond was one of many such camp-outs prompted by the movement that started in New York on Sept. 17, in Manhattan's financial district. The wide-ranging messages among those protesting boil down to unhappiness with America's economic disparity. Protestors complain that banks, Wall Street and powerful corporations are distorting the democratic process, and that 1 percent of the country unfairly influences the remaining 99 percent.

Jeremy Weiland, a 32-year-old Web consultant, ate, slept and everything else at the park since Day 1. Luckily, he says, he could get much of his work done via laptop. "I don't how it's all gonna end," he said days before the camp was raided. "But it seems like there's a lot more promise here than sitting on the couch waiting for our leaders to make sense of the mess that they've helped create."

The protest itself was peaceful, the participants mostly college-age. Just more than a week into it, the park had become during the day a buzzing community, with daily teach-ins and chalkboards marking community events and general assemblies. There was art on display, a kitchen area, a medic's tent, a place to get bike repairs, a library with sofas and full bookshelves and supplies for sign making, and from a distance what appeared to be a long clothesline, which was set up to display handmade prayer flags. 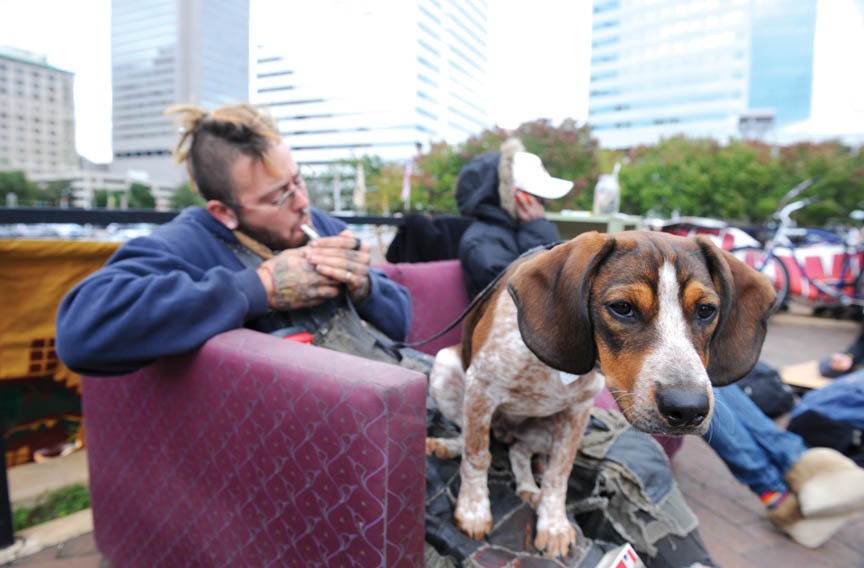 But by simply occupying the park after dark and without a permit, the occupiers broke a city ordinance.

Until Sunday, authorities let them slide, even while city officials in cities such as Oakland, Denver and Atlanta begin to crack down on the encampments — creating a variety of headline-making confrontations, violence and arrests. In turn, the occupier's numbers swelled. Nightly headcounts of campers indicated that there were some 60 to 70 people sleeping in the park each night.

That didn't include members of the city's homeless population who traditionally stay there. The two groups formed an awkward symbiosis. The encampment gave many an opportunity to set up their tents without police interference. In turn, the homeless provided temporary cover for the occupiers, though that didn't keep friction from occurring over shared resources such as food and space.

Elizabeth Palmer, 33, began sleeping at the park days after the protestors arrived. Following a tiff last week over dinner being provided at the park, she said she agrees with the overall message. But when the occupiers tired of the elements, they left for their warm homes, she said: "We're stuck out here in the cold dealing with it."

Ultimately, the city decided to enforce the anti-camping ordinance against both the occupiers and the homeless population.

During his visit to the plaza Oct. 27, Jones said his administration would designate officials to work with the protestors to "resolve" the impasse. A spokesperson for the mayor didn't immediately return requests for comment. 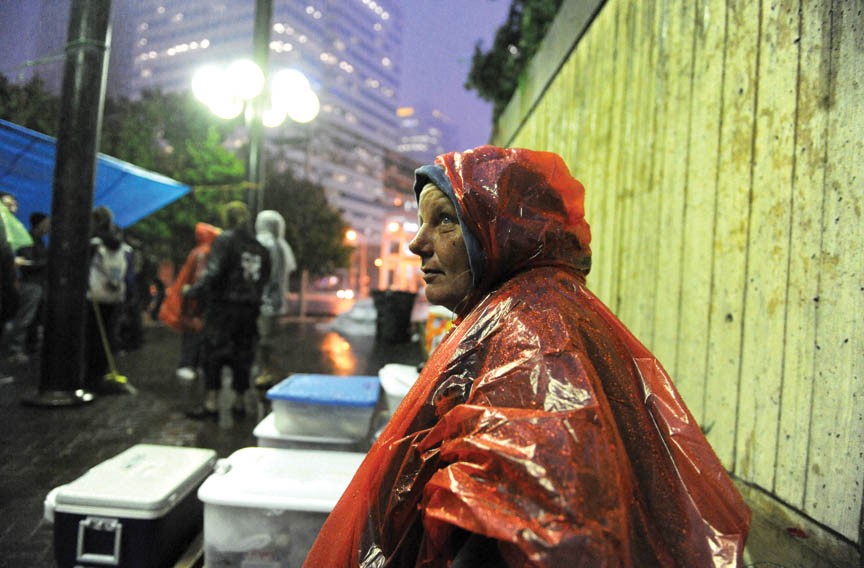 Standing outside the plaza on the morning following the encampment's removal, Richmond Police Chief Bryan T. Norwood wouldn't say whether the previous night's action was related to any public safety concern.

By Monday afternoon at 2, only one protestor was confirmed released from Richmond City Jail.

The protest began in earnest Oct. 15. On a blustery Saturday afternoon, underneath a canopy of trees, a cadre of students, activists and aggrieved middle Americans gathered at Monroe Park to settle on a site to occupy. They are mostly young, white and unapologetically frustrated with governments both national and local.

For Carino, a baby-faced progressive and 24-year-old political science student at Virginia Commonwealth University, the frustration was a slow burn. It began two years ago, he says, when the bolder reforms in Obamacare were scaled back in concession to opposition. It ratcheted up another notch, he says, watching young people protest in Egypt and Libya. "You wonder what it's going to take for people to get fed up and notice that something is wrong," he says. "And then Occupy Wall Street comes along and gives it a voice." 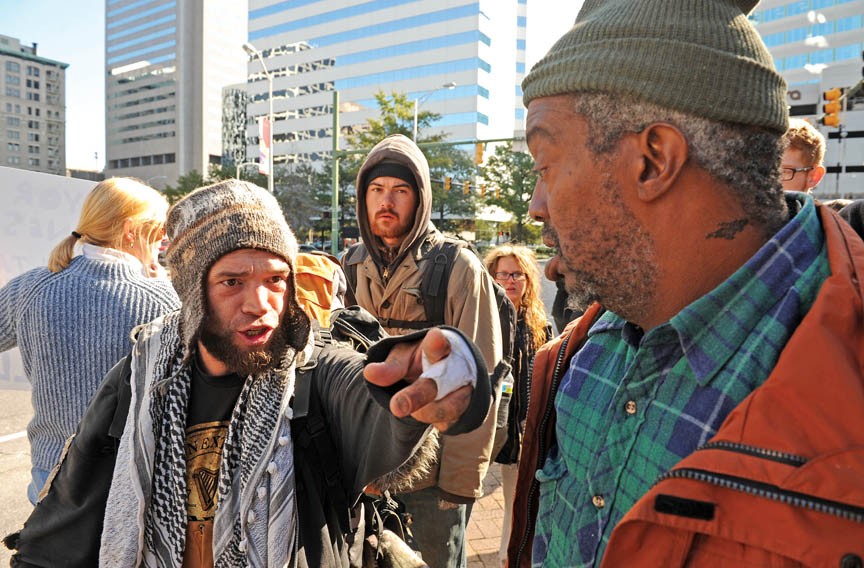 Like similar protests, Occupy Richmond remains a consensus fest. Nearly every decision made on behalf of the group — approval of fliers, daily protests — must be approved by a certain percentage of members during painfully democratic town-hall meetings called general assemblies.

After hours of labored discussion, the group settled on Kanawha Plaza. Then protesters marched a mile downtown.

This is Richmond's financial district — or, if you talk to one of the occupiers, the daytime lair of the local 1 percent of the nation's citizens who own and control most of the country's wealth, and those who do their bidding. 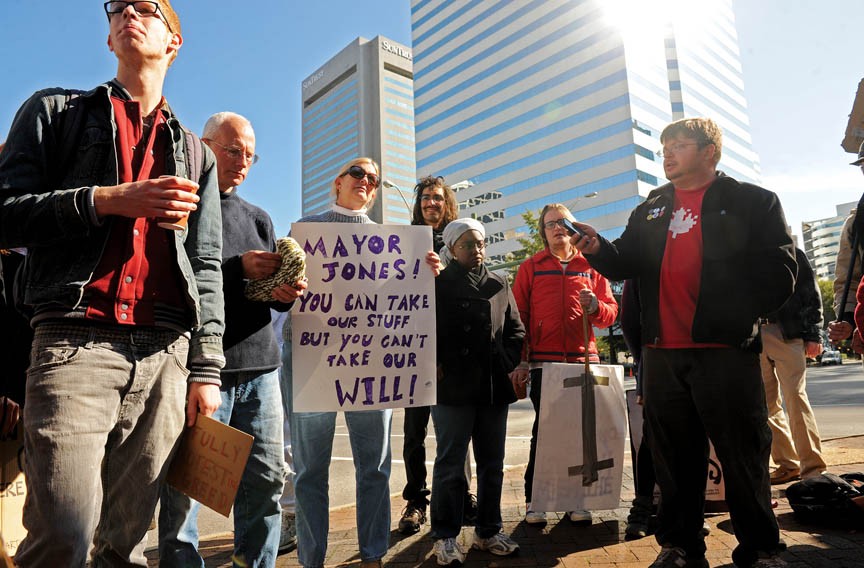 Huddled under a blue tarp, taking a break from a discussion of camp logistics days after the march, Alex Palexpagliuca said the protest was about protecting a democracy threatened by a financial system run by the likes of the banks that surround the park. "I want the system to work for everybody," he says. "Not just a small percentage of people."

Reaction to the protest, at least from passersby, was mixed. During rush-hour traffic, morning and afternoon, protestors waved signs en masse at the corner of Ninth and Canal streets. Every few moments, a car would honk in support.

"That's someone who I know wishes they could be here right now," said Alexander Winston, a 23-year-old mathematics student at Virginia Commonwealth University. "We all have lives."

At the other end of the spectrum were the disapprovers. On one recent afternoon, a man drove past, yelling: "Get a job, hippies!"

Weiland rejects the notion that the occupiers are layabout slackers looking for a handout, or any of the other charges that have been lobbed their way. But the question remains: What do the protestors want?

Discussing the possibilities, he says, is what's important for now. "I feel like we're modeling a new society here," Weiland said. "We're showing that decisions can be made effectively that represent people without having to wait for leaders to get their shit together." 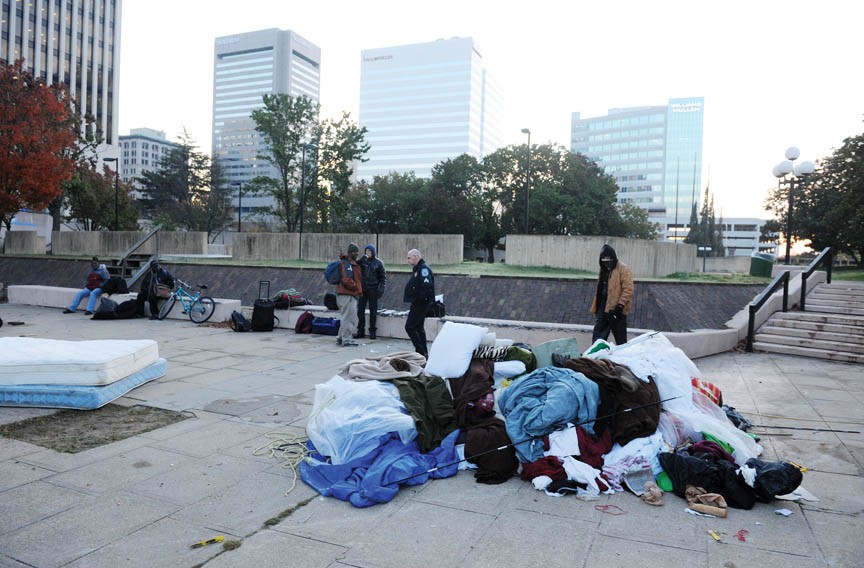 On Day 10 of Occupy, Bill Nelson ran on fumes. The group's designated liaison with the police department, the four-year Army veteran also was the de facto security guard. And the previous night was a busy one.

An altercation between two homeless men led to one man's arrest, while another man, affectionately known as Pops, was hospitalized shortly after suffering what protestors say was an apparent stroke.

"With anything like this, there are going to be issues," Nelson said, "and we're trying to resolve them to make sure that everyone here remains safe."

With the initial euphoria seemingly wearing off, cracks began to show. Allegations of an assault of a female homeless person by one of the occupiers raised tensions. At the evening general assembly, the group moved to form two separate committees — one for men and another for women — to discuss safety.

The policies of the group might change, but the message will not, Schintzius says.

There's a stillness inside Kanawha Plaza on the morning following the raid. Police stand guard behind yellow tape, with the city saying it's shut down the park for maintenance. The Occupy Protest continues on the sidewalks. "All politicians are bought," reads one sign.

After an abbreviated general assembly session, a handful of protestors decide to hold another at Monroe Park that afternoon. The faces are new. Some have been staying in the park, arriving at 11 a.m. after being ordered from there hours earlier. For others, this is their first trip to the plaza, having been drawn in with news of the raid.

What happens next will, like everything else, be decided by consensus, Carino says.

Mark Carter, one of three occupiers elected to act as liaisons to City Council in the days leading up to the raid, doesn't seem deterred by the police action.