Will the proposed $785 million ballpark and Boulevard development really cost taxpayers only $8 million? Don't bet on it. 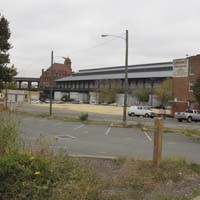 Buyer beware: The ambitious, swing-for-the-fences $785 million development of North Boulevard and Shockoe Bottom has a complex set of moving parts that will require months of due diligence and introspection by city planners and elected officials.

The biggest concern, according to local real estate observers, is the financing — both the ability of developer Highwoods Properties to secure construction financing in a national credit vacuum and the city's willingness to pitch in millions.

In particular, some cringe at the developers' promise that the proposed projects will cost taxpayers next to nothing. Officials with Highwoods say the city will need to put up only $8 million in infrastructure improvements in Shockoe Bottom — in essence, reroute water and sewer lines.

Other than that, they say, the deal pays for itself.

The only problem? Any serious investigation of the deal is next to impossible by March 1, the deadline floated by the developers in order to make both projects fly.

“I guaran-damn-tee you that this doesn't cost the city just $8 million,” a local real estate banker says, speaking on the condition of anonymity. “There is something else in there. I'm telling you that ain't the story. Nobody will do that deal with $8 million.”

Officials with Highwoods say the deal can work by tapping into the historic tax credits available through the Main Street Station train shed — as much as $20 million — and by floating tax-exempt bonds that are financed through a special tax district created around the Bottom development. The revenue to pay off the bond debt would include real estate taxes generated by the new development, along with sales and meals taxes.

The historic tax credits are closer to a sure thing; but the tax district isn't. If the ballpark costs about $60 million, around $40 million would likely be financed by issuing bonds. But the public bond markets are in the tank, and even in the best of times would require the developer to secure its constructing financing and sign leases with at least half the retail tenets, bond bankers say.
Even then, the deal is shaky.

The last time the city created a tax district to float such bonds — the Broad Street Community Development Authority — it had to be constructed using millions generated by city-owned parking decks and special tax assessments on government-owned buildings. The city was also asked to morally guarantee the bonds after it went through two rounds of restructuring that took more than year to complete.
“It will be real hard between now and March to know when you are going to be able to do these bonds,” says Kenneth Powell, a local investment banker who specializes in public financing. “I would imagine that it would be hard for anyone to give a commitment to build on any kind of certain timetable.”

Still, Powell says a bond package of $30 million to $40 million is possible for Shockoe Bottom if the conditions are right. In 2004, during the last pitch for a new ballpark in the Bottom, Powell was tasked with piecing together the public bonds.
There's no time, however, to wait for the markets to recover. Pete Boisseau, the public-relations consultant representing Highwoods, says the group is in talks with a minor-league baseball team, which needs a commitment to build a new stadium by March 1. The ballpark bonds would hit the market in late 2009.

“We're looking at next fall to sell ballpark bonds,” he says, with 2011 the goal for “ball in Shockoe — maybe 2012.” That means the developers will need City Council to sign a master development agreement by March 1.

Still, Boisseau declines to offer specifics on the financing, particularly the size and scope of the bond package. In other words, there's no way to know for sure if the most important part of both deals — a new ballpark — can be financed.

The forward-thinking plan has been couched as a test of Richmond's ability to think bigger and better. But there is simply no way to know when the economy will improve enough to make the developments a reality.

One thing's for certain, says the local real estate banker: One can bet that Highwoods isn't going to do either of the deals unless there is a considerable upside beyond what's been publicly stated.

“The city's going to have to do enough that Highwoods puts up virtually no money,” the real estate banker says. “You don't think Highwoods is doing this on blind hope and a promise? … I think the $8 million is, at best, misleading.” S