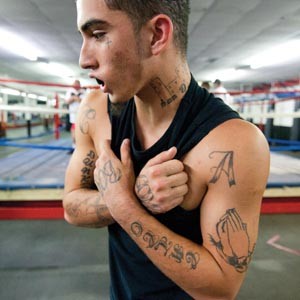 Joshua Dunkle wants to be a professional fighter, and he figures his best shot is Team Jesus.

Compact with a muscular build, the 18-year-old shows up at the Richmond Outreach Center, or ROC, on the city's South Side in a tank top and loose-fitting basketball shorts. He hustled over from a midday training session at Team United Karate in Carytown. His hair is buzzed low, his arms and shoulders covered in tattoos, which tell a story of growing up in the streets.

Now he fights for Jesus as a member of the center's mixed martial arts program.

Turning the other cheek, a key tenet of Christian doctrine, this isn't. Three times a week, Dunkle, who never graduated from George Wythe High School, travels to the center's youth campus to learn the basics of mixed martial arts along with a handful of prospective cage fighters.

Teaching the virtues of “ground and pound” might seem unusual for the traditional Southern Baptist. But for the fast-growing ROC (pronounced “rock”), which has become known for reaching out to the downtrodden — former drug users, gang members, ex-convicts — it seems to fit neatly into its ministry. The church, which recently opened a sparkling new facility off eastern Midlothian Turnpike, greets visitors with a sleek Harley Davidson chopper on display in the lobby. There are tattoo and motorcycle ministries, sending bikers into the community to preach the Gospel.

Barrel-chested and solidly Christian, chief instructor David Dise says the martial arts program is an extension of the church's unique mission: “Love the unloved and help them move beyond their troubles and closer to Jesus.” And to do that, he's going to teach them how to fight.

The center is part of a growing number of nondenominational evangelical churches that have embraced mixed martial arts, a sport once famously denounced by U.S. Sen. John McCain as akin to human cockfighting, as part of its ministry.

Since being introduced to American television audiences nearly two decades ago, mixed martial arts — a hodgepodge of Brazilian jujitsu, wrestling and other disciplines — has exploded in popularity. Prime-time matches of the Ultimate Fighting Championship series regularly draw upwards of 2 million viewers, most of them young men.

It's a demographic that American churches have found difficult to crack. Despite a decrease in the gap in church attendance, as of 2006 women were going to church six more times a year than men, according to a University of Nebraska study this year. The study, however, doesn't account for men younger than 30, the age group that emerging churches such as the Richmond Outreach Center are working to engage.

Danny White, a former martial artist, now runs Annointedfighter.com, a website that serves as a social network for mixed martial arts fighters that have self-identified as Christians. He can't say exactly how many churches across the country have affiliated mixed martial art schools or how many are sponsoring teams. But he says that as the sport grows there's a greater opportunity to engage men on their terms.

“It's just like being a missionary,” White says. “We're called to go into these cultures and act as missionaries for Christ. To do that you have to speak their language and interact with them with something they find interesting.”

For the ROC, which already has an established tradition of tapping into subcultures with motorcycle and skateboarding clubs, “branching out into the martial arts is just a natural extension of what the church does,” program instructor Dise says.

Still, could there have been some apprehensiveness among church leadership about training young men for a violent sport?

Dise says no. Phil Aguilar, pastor Geronimo Aguilar's father and founder of a similar church in California, was a kickboxing champion, Dise says. “This was something that everyone was behind and excited about,” he says.

Up until 2005, Dise owned the Virginia Karate Club. He sold the business after 25 years and found himself itching for the right opportunity to get back into teaching martial arts.

He found it last year after taking in his first service at the Outreach Center. Afterward he met Aguilar, who told him that the church had been searching for the right person to lead a martial arts program. Now he has a converted warehouse at the church filled with rows of new heavy punching bags.

Most, if not all, of his students are amateurs. Some are church members. Others, such as Dise, volunteer their time. Most of the trainees are teenagers recruited through a partnership with George Wythe High School. Every Sunday, Monday and Wednesday, the church's youth adviser, Tom Gardner, weaves through the neighborhoods along Midlothian Turnpike, crossing names off the list while he picks each of them up from home.

For young fighters, the fight club is an after-school program. Garner says that many have had issues with discipline. For others it's an outlet that keeps them off the streets. “The goal is to take them, put them through the training to teach them the discipline, chew them up and spit them out into the heart of the Lord,” Dise says.

Dunkle joined the fight club in July, shortly after being released from Beaumont Juvenile Correctional Center. He spent seven months in juvenile detention for his involvement in an after-school fight that turned into a shootout at Virginia Randolph Community High School in Henrico County in 2009. After his release from juvenile detention this spring, he dropped out.

Since joining the fight club, he's found a new calling. “I'm a grown man now,” he says. “This is now my goal in life.”

Fighting and winning is his passion now, he says.

“Josh is one of those kids that I'd ask, ‘Does anyone know where you are right now?' And he'd answer, ‘No,'” Dise says. “He's only been with the program for a month now, and you can already see how much more focused and less angry he is.”

But before that, Dunkle has to earn the right to compete, Dise says. “And Josh has a ways to go before we'll let him compete in any amateur tournaments. They all do.”

And before they can improve, they must train. Before each session, Dise leads his fighters in a “pray-in.” That's just one of the rules imposed at the Outreach Center.

Dise bows his head as the budding members of Team Jesus join hands around him. He asks God for the blessing of a safe practice. The first part of the lesson is about footwork. Part two is on proper kicking technique. Then the fighters spar. They put on their gloves and headgear and get in their stances.

“This is the part they love,” Dise says.