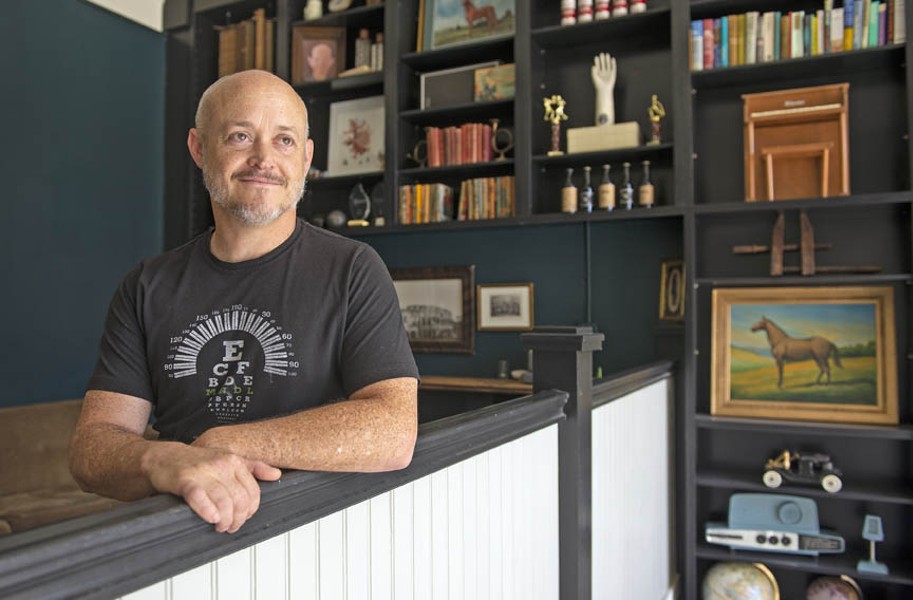 The facade at 321 W. Broad St. is unassuming and free of large signs. Inside, though, the décor is warm, inviting and classic. This is the home of Black Iris, a gallery and music studio. The organization is now becoming a full-scale social club, which is integrated throughout the building's three floors.
"One of the main goals for this place is to cultivate actual conversation, undistracted by the digital world," director Dave Jackson says.

True to his ethos, Jackson is hoping membership will spread by word of mouth, rather than constant social media updates. Moreover, there are several ways for people to experience the club before joining. One is to know a member, who's automatically allowed to bring guests. If you don't know a member, Jackson says you can simply contact him with a request through email. Or, you can apply to offer services, even artistic talent, in exchange for membership dues.

These diverse options are likely appealing to those who don't want to part with one-time $500 initiation fees and then monthly dues of $35. Though, in fairness, refunds are available during a 30-day trial period. Also, cheaper rates are available for dual memberships, a designation which seems to have couples or close friends in mind. Among the larger perks, members gain access to exclusive performances and get to vote on where to allocate funds, which all go back into the club, a nonprofit.

Navigating the space feels similar to the Choose Your Own Adventure book series, starting with the first floor. Behind the gallery is a bar featuring a mural of Moby Dick, with David Bowie serving as Captain Ahab. Ascend the stairs to the mezzanine, and you'll find a communal table with enough kitchenware to turn your takeout pizza into a sit-down feast. Stunningly, here begins a vast collection of curiosities arranged on shelves, and it tracks alongside windowpanes rising to the second floor. It's like the entire 20th-century on display, but from your hip aunt's or uncle's attic. Vintage fetishist Wes Anderson would certainly drool over the model ships, pastoral paintings and dated entertainment technology. Throughout the space are nooks with couches, tables and chairs, all chosen by Jackson's wife, Naomi, and Andrew Carnwath to reflect the gorgeous broken-in aesthetic. And yes, there are plenty of board games to play.

Co-director Justin Bailey jokingly calls it a utility belt of a building.

"We don't want to bullpen people," he says. "We want to allow conversations to stay private, if that's what people want."

One of the most common reactions Bailey hears from visitors is "It keeps going." Beyond the second floor, where recording rooms are located, visitors take another flight of stairs to what Bailey dubs the train station. Fittingly, parallel couches face each other beside a view of the city. Two more seating areas later and you come to the billiards room, which also has card tables, a foosball table and an arcade machine. Annexed to this is a vented room that looks out over the Arts District, mixing voyeurism with the taboo pleasure of smoking indoors.

"The arts community here has always been subversive, from the snake pit of Gwar to Engine Down," says Rich Stine, a Black Iris music engineer and executive producer who's assisting with the club. "We were thinking: 'How can we give back?'"

"This whole situation exists because we love Richmond," Jackson says, beaming. "People tell me they feel comfortable here, not like an outsider."

Still, the club is a lot of moving parts, as one might imagine. On a beautiful Tuesday afternoon, Jackson is running around, accommodating a DJ who's setting up in the Tiny Bar. During these daytime hours, from 10 to 5 on Tuesdays through Fridays, club members are free to roll in. Later that evening, cigars and hors d'oeuvres get passed around as the DJ goes live. The club's nightly schedule is from 5 p.m. to midnight, Tuesdays through Saturdays. Intriguingly, staff may extend these hours at will and the club anticipates that members will vote to permanently extend hours within the next few months. Many themed events are in the pipeline, including a craft beer event in October.

"I happen to be totally, probably overly, romantic about the idea of this spreading word of mouth, because I've grown up in the do-it-yourself scene," Jackson says. "But my dream is for it to work that way. First Fridays is an easy way to pop in."

"The biggest concern for me is having a place where every single person feels safe. We have an absolutely zero tolerance harassment policy. So far everybody has actually appreciated that." S

To set up a free visit, contact Dave Jackson at social@blackiris.tv.