Bits of the Kingdom

"Dynasty and Divinity" at the VMFA offers a glimpse of an ancient world. 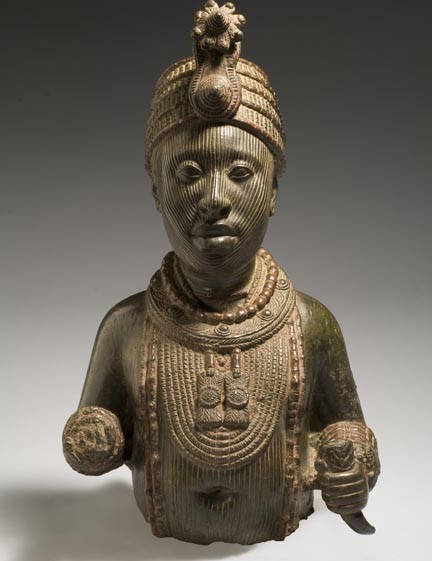 How can greatness be forgotten? Well, a lot can happen in 800 years.

On the southwestern coast of Nigeria lies a land known as the kingdom of Ife. At its cultural peak between the 12th and 15th centuries, Ife was a central point for trade and art, most notably glass beads and copper work. It was a 1938 accidental discovery of sculpted portrait heads by laborers digging a foundation that recovered the greatness of the kingdom and its artistic history.

Sometimes it was less than 2 feet below the surface where these works of art were uncovered. The reason for burial may have been ritualistic or as preservation against the numerous wars that caused the city to be abandoned many times. In this chaotic history, the people of Ife lost connection with a period of their own greatness.

"Dynasty and Divinity: Ife Art in Ancient Nigeria," showing at the Virginia Museum of Fine Arts, is a traveling exhibition of these found works. It showcases masterful examples of brass, copper, stone and terra cotta sculptures. The exhibit has been called some of the most important works of West African art ever shown in the United States.

"I think it is extremely valuable because the perceptions of Africa and the history of Africa have been skewed by the colonial period," says the museum's curator of African art, Richard Woodward. "Cultures have been put into contention with each other because the political landscape of Africa was created by European colonial powers."

This fracturing of the Ife life by outsiders echoes in the work in the show. Most pieces are represented by the term fragment. Often they're just pieces of a larger sculpture of whose initial purpose and intent could forever be lost.

"Fragment of an arm" is a telling piece of the show. The detailed work of terra cotta is a mere glimpse into a full sculpture. The hand is ornamented with bracelets and holds a piece of cloth. The meaning of this gesture is not known by scholars. The initial image is not foreign, yet the complete story is just beginning.

The nation itself became fragmented after contact with Europeans. Yet these small discoveries and the importance of this exhibit reveal a past unlike many had considered. Despite many of the artifacts being just fragments, there's more than enough to recognize the skilled humanity at work here.

"When I look at these heads I see the Ife as astute observers of their world. They are capable of using their great skill to truly create what they perceive," Woodward says, "... so delicate a touch as to make the terra cotta appear as skin."

The show includes the world-renowned collection of life-sized portrait heads made from copper. These works are elaborate creations to honor the royalty of Ife, a group connected with the divine. Far from primitive crafts, the depth of ability used to form these regal heads allows a new understanding to the region's history by bringing royal faces of the past into the present. Many of the terra cotta works reveal details of everyday life — including fashion, ideals of beauty, economics, scarification rituals, human sacrifice, and harsh realities such as figures with elephantiasis of the scrotum or legs riddled with rickets.

Each small detail reveals volumes about an ancient world and these ancient artists. For now it will have to be enough that these small bits, these beautiful fragments, open the kingdom of Ife to the world. S

"Dynasty and Divinity: Ife Art in Ancient Nigeria" is on display at the Virginia Museum of Fine Arts, 200 N. Boulevard, until May 22. Call 340-1400 for details.