Three places to try this traditional Korean dish in Richmond. 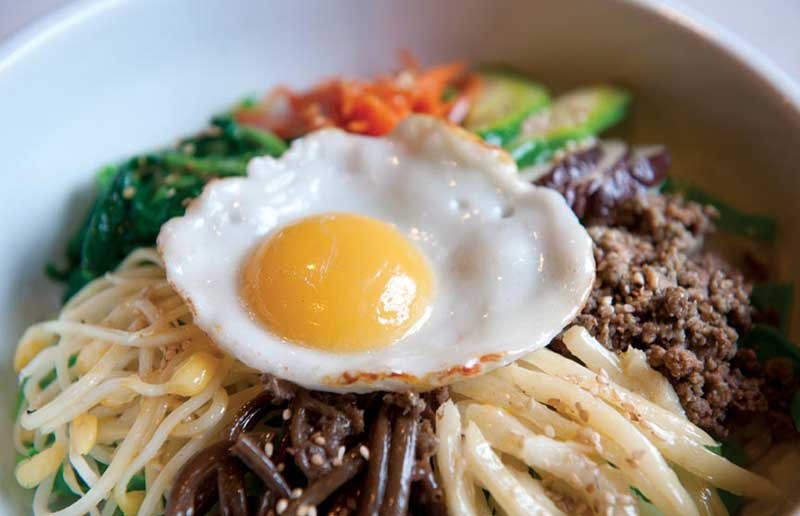 Americans are by and large squeamish eaters. We shy away from offal, are picky about texture, avoid insects entirely, and won’t eat many sea creatures treasured by other cultures. Television food shows find voyeuristic audiences for so-called bizarre foods from around the world. Perhaps it’s because we’re wealthy enough that we’ve become accustomed to buying only choice cuts of meat. Whatever the root cause, our often-limited palates cause us to miss a world of delicious food enjoyed by billions of people outside our borders.

Korean food has a few dishes that have reached mainstream American consciousness, but many of them remain undiscovered. Most know Korean barbecue — typically a dramatic meal of meat grilled right at your table. There is, of course, much more to Korean food, and we’re lucky to have multiple options for exploration in Richmond.

While visiting Seoul years ago, one of my favorite discoveries was bibimbap (literally “mixed meal”), a large bowl of rice with a variety of vegetable and optional meat toppings, finished with a mildly spicy chili paste sauce and topped with a fried egg. Typical vegetables are carrots, daikon, sautéed mushrooms, spinach, sprouts and sometimes lettuce. Bibimbap is tame enough that in its basic form it never will be featured on a bizarre foods episode, and is a perfect entry point for Korean food novices looking to try something new.

A note on eating bibimbap: Mix the whole dish together with a spoon before eating.

The menu at Korean Garden is filled with Japanese offerings, but among the many Korean dishes are the most varied of bibimbap choices available in town. In addition to the standard version ($10), you can order dolsot bibimbap ($12, beef or seafood), which is served in a hot stone bowl with a raw egg on top that cooks as you mix.

Adventurous eaters should try the delicious yuk hwe bibimbap ($15), shredded raw beef and raw egg served cold with a side of rice warm enough to barely cook your egg. The hwe deop bop ($15) is a topped with raw fish. The dinner portions are served with various banchan, or small plates, including three varieties of kimchi, which are a great low-commitment way to expand your palate to include Korean food. The overall dining experience at Korean Garden is superb, with helpful service and high quality food, but the basic bibimbap could use more seasoning.

This restaurant is set up for table grilling for barbecue, but the menu ranges widely into other culinary territory. There are two basic versions of bibimbap — the standard and dolsot bibimbap; 88 Garden’s are served with small plates of kimchi, sautéed vegetables and marinated soybeans. The bibimbap is served with the chili sauce on the side to add as you please. Although offering less variety than others in town, 88 Garden serves a solid and traditional take on this dish.

Mama’s Kitchen (a Korean friend tells me the Korean name means something like, “Hey Ma, I’m hungry!”), on the Grace Street corridor of Virginia Commonwealth University’s campus, is the fast-food joint of Korean restaurants in Richmond, which is to speak only to its service style and not the quality of its consistently good food.

Bibimbap has its own category on the menu and is available in many versions: vegetarian ($6.99), beef, chicken or pork bulgogi ($8.99), or served in the hot bowl with seafood or bulgogi ($10.98). Unlike the other two restaurants, the dish comes with the chili sauce on, and with only a side dish of kimchi. The beef bulgogi is by far the best meat served with any bibimbap in Richmond. While Mama’s is a good option, the toppings don’t offer quite enough variety of flavor and the whole dish can begin to taste monotonous. Nevertheless, Mama’s remains a favorite of mine for its quick, friendly service and well-executed food. S