Birds of a Feather

Richmond Triangle Players close their 20th season with a bang. 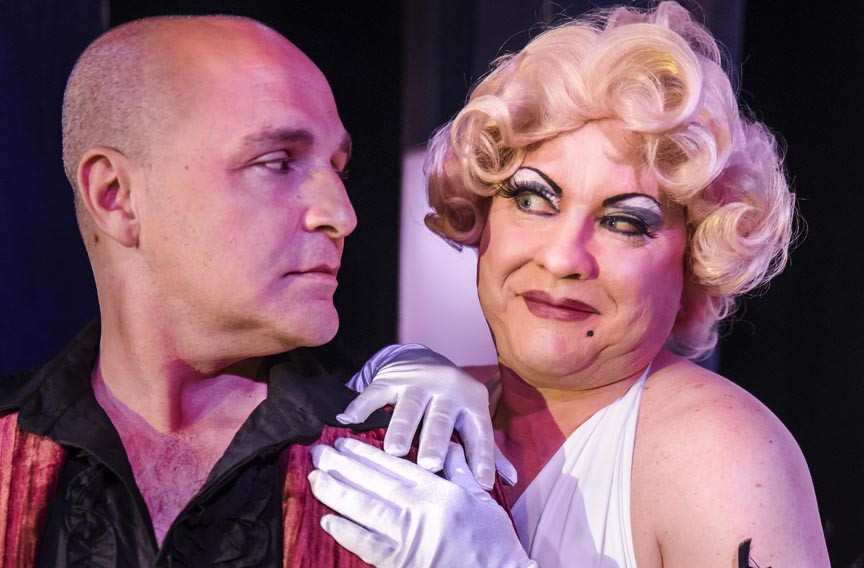 In the world of drag queens, illusion is everything. With a wig, falsies, heels and makeup, a man can transform himself into an entirely different entity.

This is the world the musical "La Cage aux Folles" inhabits, and as you might expect, it lends itself to a cast of interesting characters. There's Georges (Matt Beyer), the owner of a gay nightclub on the French Riviera trying to balance the conflicting needs of his family. There's his "wife," Albin (Kirk Morton), who takes the club's stage nightly as the diva Zaza. And there's Jacob (Durron Marquis Tyre), the "maid" trying to win a role in the nightclub's review.

Based on Jean Poiret's French play of the same name, Harvey Fierstein and Jerry Herman's musical adaptation was wildly successful when it hit Broadway. With its message of acceptance, the musical was crafted by Herman and Fierstein for the mainstream, and like the ongoing gay rights movement, this struggle is framed in terms of family. It's with this work that the Richmond Triangle Players closes their 20th season.

Georges' son Jean-Michel (Tyler D. Wilson) has returned home to announce that he's engaged, and that his fiancée and future in-laws soon will arrive to meet his family. Complicating matters is that his fiancee's father is an ultra-conservative politician on a crusade to shutter gay nightclubs like "La Cage." While Georges can pass for heterosexual, what's to be done about Albin, a man more comfortable in pumps and mascara than swaggering around like John Wayne?

As Georges, Beyer does good work as the straight man, so to speak, and his excellent voice shines in such numbers as "Song on the Sand" and "Look Over There." Morton brings humanity to the character of Albin, obviously wounded by his son's attempts to cover up who he is. His song "I Am What I Am," at the close of the first act, is particularly moving.

While the show's singing is of variable quality, Nicole Foret Oberleitner's choreography more than makes up for it, particularly in the routines of Les Cagelles (Brian Baez, Philip Baraoidan, Andrew Etheredge, Asa Maurer and Ian Stearns). This fivesome of drag queens doesn't miss a step, tapping, high-kicking and whirling around the small stage with breakneck speed and precision. Watching these men jump high into the air and land into splits is nothing short of jaw-dropping, especially for those sitting in the front row.

With its runway into the theater's seating area and the posters for fake shows starring Zaza that hang in its lobby, Triangle relishes blurring the lines between the fictional nightclub and the theater in which the audience is sitting. Even when it doesn't necessarily hit all the right notes, "La Cage" offers an entertaining and fun night out that's certainly no illusion. S