The Virginia Biotechnology Research Park exceeds expectations, officials say. So where are the biotech start-ups, patents and research? 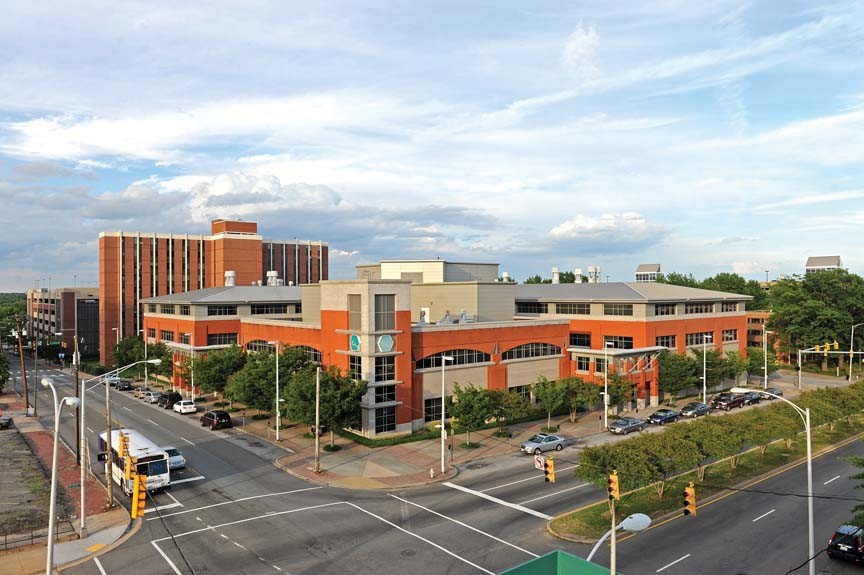 Nearly 20 years old, the Virginia Biotechnology Research Park was born during a heady time when health science seemed to hold tremendous promise. Biotech was green, lucrative and beneficial to society. Start-ups could follow the example of Genentech, the superstar pioneer from the West Coast that had gone through the various stages to reach biotech stardom, from incubation to venture capital to public-stock offering.

Richmond's business elite, led by then-Gov. George Allen, wanted a big part of the action. So the business park next to the Virginia Commonwealth University Health System became one of about 160 created in cities large and small — all seeking to snag the golden ring of biotech.

The idea was to mix university and private researchers with angel and venture capital funding, go through the tedious stages of regulatory approval and pop out with stock-selling public and private companies that would produce world-class health products. They'd remain in Richmond and hatch more companies like themselves. Success would be measured in patents issued, how many sustainable companies and clusters were created and how much contract work the labs won from big pharmaceutical companies and other large corporations.

Two decades later, there isn't all that much to show for the great dreams of the early '90s. The city biotech park has produced three publicly held companies. Of these, two have moved out of town and one is deeply troubled by management and financial problems.

"That track record is not atypical. It is a highly volatile industry," says Joe Cortright, a Portland, Ore., economist who coauthored a Brookings Institution study of biotech parks in 2002.

Park officials refuse to say how many patents its tenants have registered, although one, Ceres Biotechnology, says on its website that it's issued 11 patents, with 12 more pending. VCU, which is associated with the park, has issued 56 patents during the past five years, a university spokeswoman says. By comparison, the Massachusetts Institute of Technology, a leading research institution, generated 134 patents in 2009 alone.

The biotech park's weak record has local officials debating its future. Already the city is beginning to make plans to replace the Richmond Coliseum on property that park officials long have eyed for expansion. Henrico County Manager Virgil Hazelett says that the Virginia park "has done well" but "needs a lot of funding and it never received much funding from Virginia or industry. It hasn't done as much as it can do."

It isn't the first time worries have surfaced. Concerns came up when the city was in a secret and intensive frenzy in 2003 to convince tobacco giant Altria and Philip Morris USA to relocate their headquarters from New York to Richmond. Part of the move involved building a $350 million research center at the park. But the tobacco giant's research facility is a walled-off compound of sorts; its scientists work in secret on smoking-cessation products and other research, contributing little to the park's vision of academic collaboration.

Robert Skunda, president and chief executive of the Virginia Biotechnology Research Park Authority, a political subdivision of the state, declines to be interviewed for this story.

Meanwhile, local officials continue to pay lip service to its benefits. "The biotech park is a regional asset," Chesterfield County Administrator Jay Steigmaier says. He says the county did get a spinoff from the park, but he couldn't recall its name. "It had some organizational issues," he says.

Indeed the company, Commonwealth Biotechnologies, the park's first tenant in the early 1990s and once its poster company, moved to Chesterfield in 1998. (The company left, in part, because the rent was too high.) Recently, the company has gone through a series of crushing financial problems. In one of its stranger episodes, it recently asked the U.S. Securities and Exchange Commission to ignore filings by its chairman, William Guo, who was trying to make himself the sole director. The company has been in Chapter 11 bankruptcy.

Another former star that got its start at the park and later went public, Insmed, quietly relocated to New Jersey after buying a pharmaceutical company there. When the stock purchase was announced last year, company officials declined to say what their future in Richmond would be. In a May 10 news release announcing first-quarter earnings, the company indicated that corporate headquarters had been relocated to Monmouth Junction, N.J. Officials from Insmed and Commonwealth Biotechnologies could not be reached for comment.

Some of the buildings at the park are taken up entirely by state or VCU operations that have nothing to do with biotechnology start-ups, such as he state medical examiner's office, which handles such things as crime-related DNA samplings and forensic autopsies. VCU Health System has its accounts payable unit in another.

The park's authority has been in talks to sell two buildings, Biotech One and the Biotech Center and related property, to VCU for $4.5 million. The park would then lease back the building for $1 a year. That deal was scheduled to close in the first quarter, according to the authority's financial statements, but recent management changes at VCU have delayed the deal, says Joy Edgett, director of finance at the park. "It's still in the works," she says.

The deal would allow the university to get out of "more expensive leased space" elsewhere, a spokeswoman says. But the sale to VCU highlights the biotech park's broader challenges: At the moment, most of its space appears to be occupied by entities that have nothing to do with the original purpose of incubating biotech start-ups and spinning them loose. Very little "clustering," or big-time corporate contract work, has been achieved. At times, it's difficult to tell what distinguishes the biotech park from any other office park.

The truth could be that Richmond just doesn't have the resources to snag the golden ring of biotechnology. "It's hard for Richmond. They are in our median metro areas of places with a million or so people and maybe a $150 million in research funds," Cortright says of the region. "They really haven't produced anything." S